Bone cancer in his right knee at age 7 did not stop Kavi Pandya from playing sports. After rotationplasty – a surgery that preserves the lower leg, attaches it to the thighbone, then houses the ankle as a knee joint – the avid athlete was back on the baseball field with the help of a prosthetic.

When his cancer returned at age 12 and his right leg was amputated at the hip, Kavi feared he would never play again. He then discovered the Lone Star Adaptive Soccer Association, which fulfilled his passion to continue playing sports. 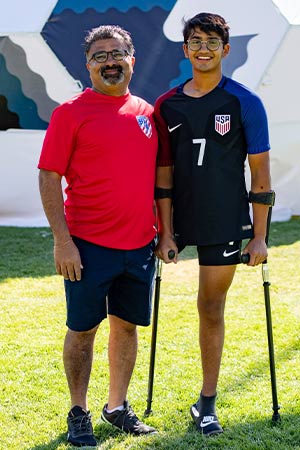 “I just love every part of sports so much,” said Kavi, 16, a patient of Patrick Leavey, M.D., Professor of Pediatrics at UT Southwestern and a pediatric hematologist/oncologist at Children’s Medical Center Dallas. Kavi discovered soccer when he attended a UT Southwestern expo on adaptive sports hosted by the Dallas-Fort Worth Adaptive Sports Coalition.

He knew immediately at the time that he wanted to play on the team. The coalition is hosted by UT Southwestern’s Department of Physical Medicine and Rehabilitation and the Peter O’Donnell Jr. Brain Institute in collaboration with other adaptive sports groups in North Texas.

This October, Kavi will play on Team USA Amputee Soccer when the team competes in the 2022 Amputee Soccer World Cup in Turkey involving teams from 24 countries vying to win the sport’s biggest prize. Kavi recently learned he made the final roster and is now in training after returning in March from the team qualifier in San Juan de los Lagos, Mexico. As a member of the World Cup team, Kavi will be joined by UTSW certified prosthetist/orthotist Fabian Soldevilla. 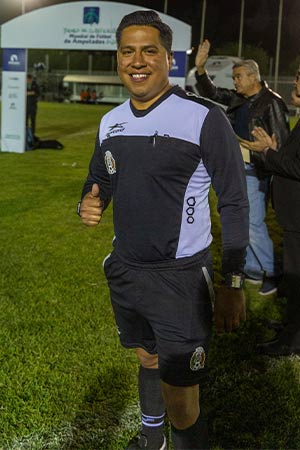 Fabian Soldevilla, a UTSW prosthetist/orthotist and assistant coach with Lone Star, went with the team to Mexico and will referee at the world match in Turkey this fall. Credit: Nigel Degraff

Mr. Soldevilla, an assistant coach with Lone Star who also is a UTSW Faculty Associate and Prosthetics-Orthotics Lab Manager in the School of Health Professions, will not attend the competition in that capacity but instead serve as a referee. Nonetheless, he is thrilled to see Texas players he has coached showcase their talents on a global stage.

So many eyes will be on the USA team and amputee soccer in general for the World Cup, Mr. Soldevilla said.

“The players’ passion, competitiveness, and extraordinary athletic abilities attract tons of fans,” he said. “Although these athletes are missing limbs, it doesn’t stop them from having amazing accomplishments.”

The nonprofit Lone Star Adaptive Soccer Association brings together 13 amputee players from across Texas. Players range in age from 8 to 43 and have lost a limb to cancer, accidents, or birth abnormalities.

They all bring amazing drive to the sport, Mr. Soldevilla said. “Just because they have an amputation doesn’t mean they can’t be athletes. It takes a herculean effort to play soccer with a limb missing. These players have tremendous stamina and strength,” he explained. 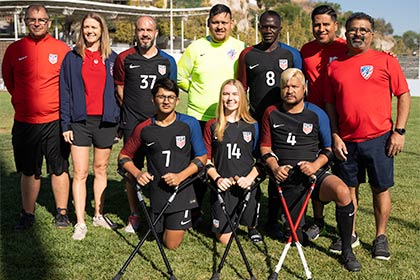 Kavi (bottom row, left) is pictured with fellow teammates and coaches who competed in the Mexico match. Credit: Nigel Degraff

“Their core is really, really strong compared with able-bodied players who can use their hips and plant a leg to provide support when moving the ball,” said Mr. Soldevilla. “With adaptive soccer, you have to have a really strong core to get power and speed.”

Kavi, the youngest team member of the Lone Star Adaptive Soccer Association’s Dallas team, has always been competitive and had dreamed of being an athlete for years. Getting knocked down or banged up by the sticks, as he often does, never discourages him.

Kavi practices with the team in advance of the Mexico match.

“This sport is faster and more physical than people realize,” he said.

As much as he loves playing, Kavi said it’s the time teammates spend together after the game that is most meaningful.

“When we are all sitting together laughing and having fun, it just feels like we are a family,” he said.

Finding camaraderie can be challenging for some amputees, which is one reason why the support that the team provides is so important, Mr. Soldevilla said.

“The team does more than give these athletes a place to play, whether for competition or recreation,” he said. “It’s a community of individuals who can share similar experiences.”

Research has shown that participating in sports offers many benefits inclusive of physical and psychosocial rewards. It can reduce obesity and lower the risk of developing other medical conditions, depression, or anxiety, said Stephanie Tow, M.D., Director of the DFW Adaptive Sports Coalition. 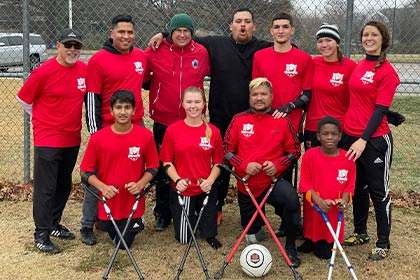 Members of Team USA including Kavi (bottom row, left) are gearing up for the world match in Turkey this October. Credit: Nigel Degraff

“Adaptive sports participation often helps emphasize people’s abilities rather than their disabilities,” said Dr. Tow, also an Assistant Professor of Physical Medicine and Rehabilitation at UT Southwestern and Director of the UTSW Adaptive Sports Medicine Program. “For people who have a limb difference or amputation, participating in soccer or other sports or fitness programs provides them with a major aspect of their life that they should have access to regardless of their ability.”

Although he was initially discouraged when his leg was amputated, Kavi said he learned to enjoy life again and is now optimistic about his future. His goal is to become a sports medicine physician.

For now, nothing compares to the thrill of running across the soccer field.

“There’s nothing sad about it,” he said. “It’s just so much fun and feels so good.”

About Prosthetics-Orthotics at UT Southwestern

Each year, thousands of people lose vital motor functions due to trauma or disease. When a limb is lost, physicians prescribe a prosthesis to take its place. Created and fitted by prosthetists, these artificial limbs are sophisticated tools for daily living that enable patients to walk, grasp, and function more fully. And when injury or disease causes disability, orthotists design and fit orthoses that protect, strengthen, and support existing extremities.

Prosthetics and orthotics professionals help amputees, patients with musculoskeletal disabilities, and those with injuries regain self-confidence and an improved quality of life. Fabian Soldevilla works in UT Southwestern’s Prosthetics-Orthotics Clinic, where a highly skilled team of clinicians and technicians provide the entire spectrum of prosthetics and orthotics care. The state-licensed and board-certified faculty seek to improve the functionality and independence of patients’ daily lives. A personal and compassionate approach is taken with each patient, starting with the initial consultation.

Follow-up care includes educating patients on the use and care of their prostheses and orthoses, future consultations as needed, and providing feedback to physicians, therapists, case managers, and others.

Besides providing expert care, UT Southwestern teaches the next generation of caregivers. A Master of Prosthetics-Orthotics program available since 1982 in the School of Health Professions gives students world-class training in one of health care’s most fascinating and rewarding professions.

The master’s program features a full-time, postbaccalaureate curriculum that begins once a year in May and ends 19 months later in December. Successful graduates go directly into residency training. This involves 12 months for prosthetics and 12 months for orthotics. After completing their residencies, graduates are eligible to sit for prosthetics-orthotics certification exams.

Proof of the program’s excellence is found in these statistics: 100% of the 2021 graduating class found residencies and 100% was the first-time pass rate on various 2021 orthotic and prosthetic exams. In addition, UTSW has the only faculty practice in Prosthetics-Orthotics in the country.