For years, brain surgery has involved anesthesia, scalpels, drills, and sometimes wires implanted into the brain. Today, some cutting-edge treatments involve no cutting at all.

The latest methods use high-intensity focused ultrasound (HIFU) waves to penetrate the brain and remove unhealthy tissue. It is similar to how children use a magnifying glass to focus the sun’s rays and burn a scrap of paper – only instead of sunlight, ultrasound is used.

Now, technological advances are taking this treatment to the next level. Guided by MRI, physicians can precisely target specific parts of the brain, locating groups of cells and aiming the ultrasound waves with far greater precision. This technology is known as magnetic resonance-guided high-intensity focused ultrasound, or MRgHIFU. 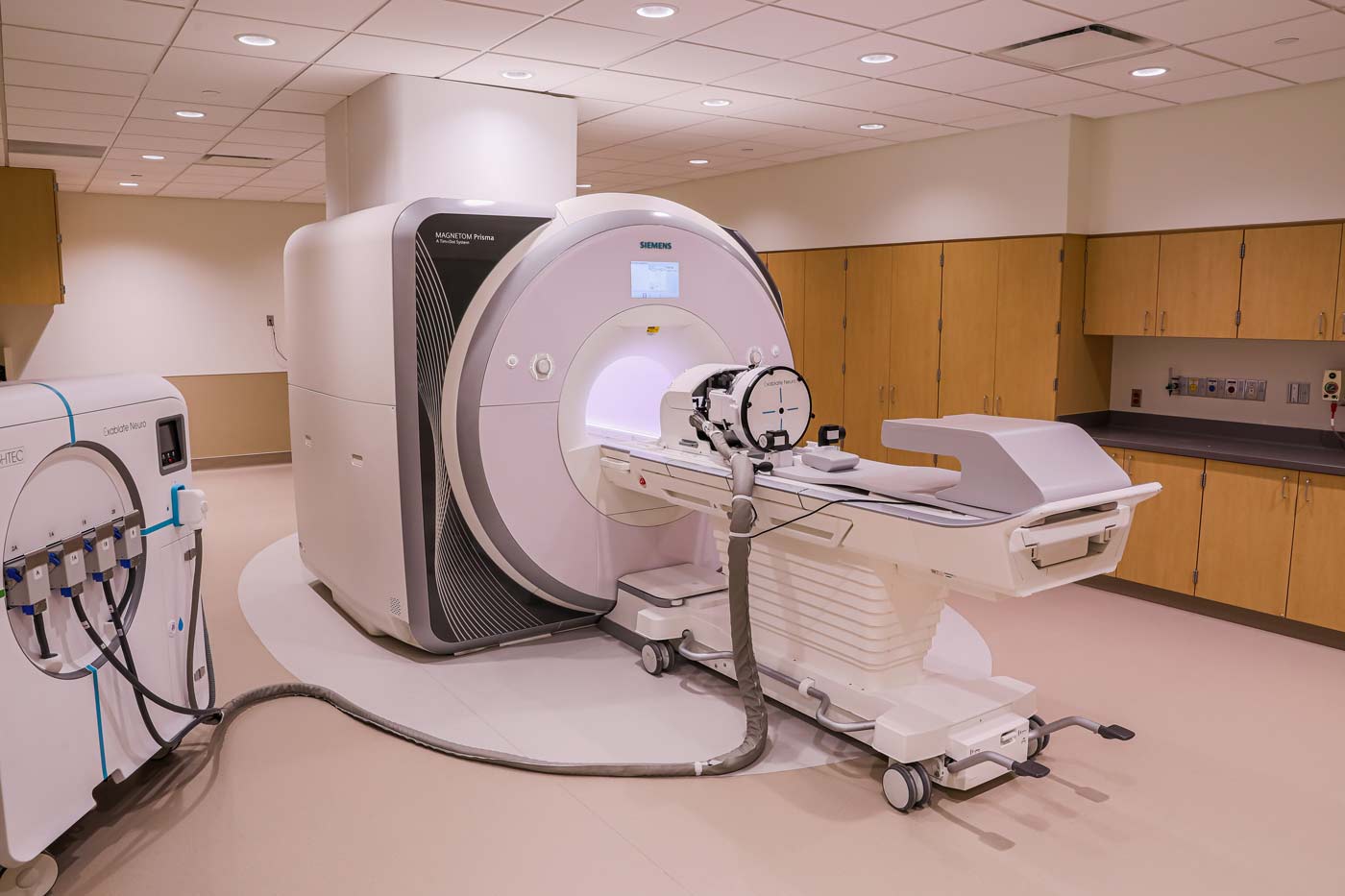 A $5 million gift to the Peter O’Donnell Jr. Brain Institute enabled UTSW to add the new equipment, which is located in William P. Clements Jr. University Hospital and used for both clinical care and research.

“MRgHIFU technology can potentially eliminate the need for invasive surgery,” said Dr. Bhavya R. Shah, Assistant Professor in the Division of Neuroradiology at the Peter O’Donnell Jr. Brain Institute, who is a pioneering researcher at the forefront of this innovative treatment. “High-intensity ultrasound waves can be focused across the skull under real-time MRI guidance to ablate or burn away diseased tissue without the necessity of opening up the skull.”

Finding innovative ways to make a difference in people’s lives with technology is central to Dr. Shah’s work as Director of the Neuro Focused Ultrasound Program. As a child, he gained a love of working with devices from his father, an ophthalmologist who developed new ways to use laser technology for cataract surgery. 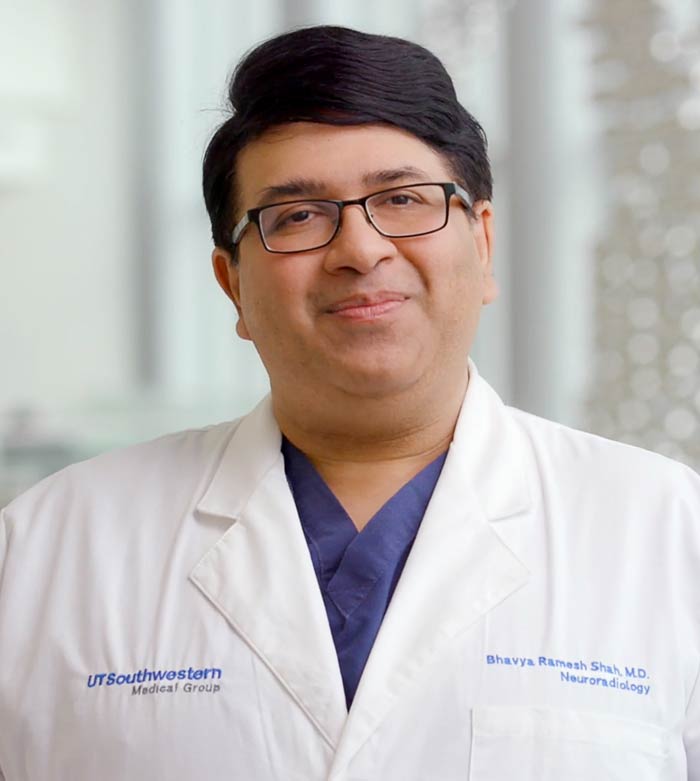 Dr. Shah uses MRgHIFU to treat patients with essential tremor and tremor-dominant Parkinson’s disease. The Food and Drug Administration has approved the technology as an effective tremor treatment for both conditions.

“With today’s technology, a patient wears a helmet that focuses ultrasound beams onto a precise point in the brain,” he said. “There is no implantable hardware, no general anesthesia, and no incisions at all.”

The technology is also used to treat cancers. Prostate cancer was one of the earliest forms treated using MRgHIFU, but the technique might also be applied to breast or bone cancer.

“Pairing HIFU with our advanced imaging methods ensures you locate the appropriate targets in each patient and avoid damaging other structures,” Dr. Shah said.

A first for Texas

The technology’s impact on the way physicians treat brain diseases could be seismic. The National Institutes of Health estimates that essential tremor impacts as many as 10 million Americans. Parkinson’s disease affects a million more. 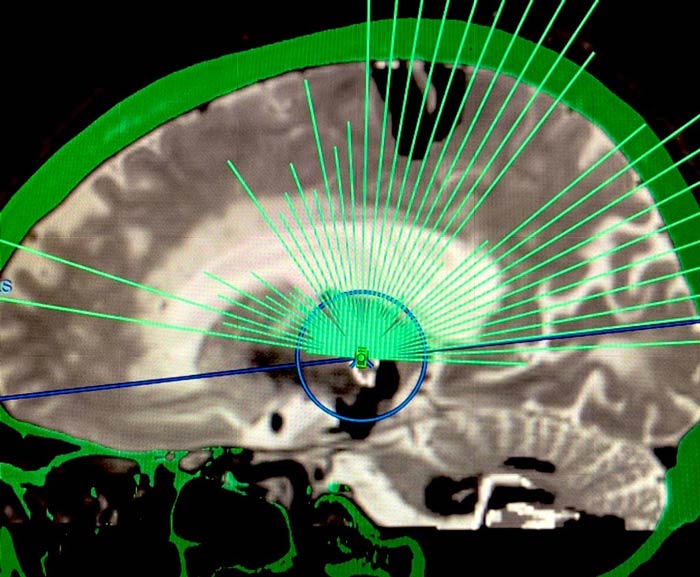 This ray diagram, which shows ultrasound beam trajectories overlaid on a patient’s MRI image, depicts all of the high-intensity focused ultrasound beams as they cross an intact skull to reach a single treatment point in the brain.

UT Southwestern is the first hospital in Texas with the technology, thanks to a $5 million gift from an anonymous donor to the O’Donnell Brain Institute, which is utilized for both clinical care and research. The equipment is housed in the newly opened third tower of William P. Clements Jr. University Hospital, which has specialty care units for patients with brain diseases and is the clinical home of the O’Donnell Brain Institute.

The first patient procedure took place in early March 2021. Tremor and Parkinson’s patients from as far away as the Middle East and Europe have expressed interest in traveling to Dallas for the procedure.

It’s a significant moment, even for an institution accustomed to being on the leading edge.

“We are at the forefront of brain science because of the visionary generosity of our supporters, innovation of our scientists, and outstanding care provided by our clinicians,” said Dr. Daniel K. Podolsky, President of UT Southwestern. “This gift enables us to bring a technology with great promise to Texas and surrounding states, expanding our capacity to pursue groundbreaking research and opening up new treatment possibilities for patients in Texas and beyond.”

An extensive team of UT Southwestern leaders collaborated across brain research, radiology, and neuroradiology to bring this project to fruition. The Neuro Focused Ultrasound Program works with physicians in Neurology, who initially evaluate patients. Since the new procedure is not appropriate for everyone, Dr. Shah consults with colleagues in Neurology and Neurosurgery to decide on the best candidates. MRgHIFU is one of several types of next generation “neuromodulation” therapies being advanced in the O’Donnell Brain Institute.

Besides using MRI-guided focused ultrasound in brain surgery, Dr. Shah is currently leading clinical trials at UT Southwestern to determine whether this technology is effective for delivering drug therapies and diagnostic agents into the brain – past the blood-brain barrier. 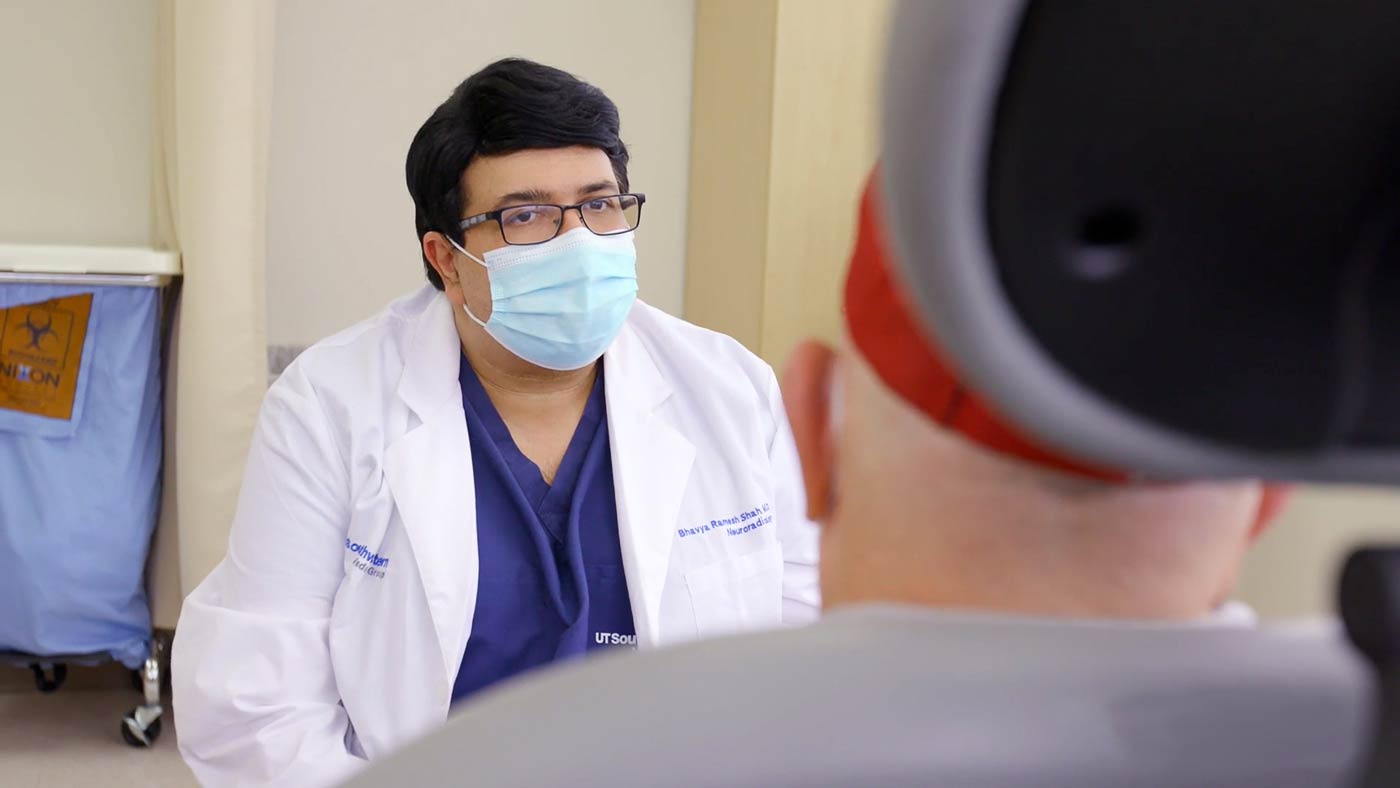 Dr. Shah is using the technology in both brain surgery and in clinical trials where he sees potential to use focused ultrasound to deliver therapies to targeted parts of the brain in patients with Alzheimer’s disease and brain tumors.

Acting as part of the body’s defenses against toxins and diseases, the blood-brain barrier is a type of wall that separates the brain from the bloodstream. Essential nutrients delivered by the blood can pass through the barrier to the brain, but larger particles, such as bacteria or viruses, cannot.

The shield works so well it’s hard for physicians to deliver therapies to the brain.

Injecting drugs directly into the bloodstream is not effective for treating the brain because the blood-brain barrier stops them. Alternatively, when injected directly into the brain, drugs do not extend very far beyond the injection site. As Dr. Shah points out, “Anytime you put a needle close to the brain there is always the chance of injury.”

Those risks aren’t a factor with MRI-guided focused ultrasound.

One of the best ways to penetrate the blood-brain barrier is to inject a series of small gas-filled bubbles into a vein. Once they reach the brain, they can be targeted with focused ultrasound. When the ultrasound waves interact with the bubbles, the bubbles gently vibrate and push open the blood-brain barrier. Diagnostic agents and other therapies can be delivered through the opening, directly to the brain.

“What we’re now doing is turning the ultrasound wave energy level way down … to not destroy any tissue but rather to interact with microbubbles to open the blood-brain barrier,” he said. “This process can then deliver drugs or diagnostic agents to a specific target in the brain.”

Through his clinical trials, Dr. Shah sees potential to use focused ultrasound to deliver therapies to targeted parts of the brain in patients with Alzheimer’s disease and brain tumors. He also anticipates using the technique to deliver immunotherapy and gene therapies in patients with neurodegenerative diseases, movement disorders, and genetic diseases.

“The future of personalized medicine is in using MRI-guided focused ultrasound to deliver gene therapy, chemotherapy, and immunotherapy to specific regions of the brain instead of destroying brain tissue. These noninvasive procedures could be a game-changing, clinical breakthrough,” he said.