Dr. Vincent Tagliabracci studies so-called “zombie enzymes” in work that is bringing those pseudokinases back from the scientific dead.

In humans, there are more than 500 protein kinases. Classical kinases are enzymes that transfer phosphates from a high-energy molecule such as adenosine triphosphate (ATP) to proteins to regulate a multitude of cellular processes. However, about 10 percent of family members lack key amino acid residues needed for phosphorylation, thus rendering them useless for transferring phosphate groups.

But in studies published in Cell in 2018 and Science last year, the Tagliabracci laboratory found that some pseudokinases are only dead when scientists are specifically looking for phosphorylation.

“No one would detect phosphorylation in them because they do something else – a different kind of chemistry. We found that they catalyze an entirely new reaction for a member of the protein kinase superfamily,” he said. He’s referring to the Cell study in which his lab identified one pseudokinase that does AMPylation, which involves moving an adenosine monophosphate (AMP) molecule onto a protein.

His lab also reported that another pseudokinase carries out glutamylation, the transfer of the amino acid glutamate to a protein. Both pseudokinases are now considered important to cell signaling as well as to the spread of deadly bacteria.

Dr. Tagliabracci’s zombie hunt begins with a bioinformatics-based search for protein kinases that seem to lack the key catalytic sequences that otherwise fit the family profile.

“These are usually so different that most people haven’t noticed that they are kinases. In fact, the amino acid sequences have diverged so much that they are not recognized by standard bioinformatic methods and they don’t show up in databases of kinases,” he said.

Dr. Tagliabracci’s career journey – and the winding path on which he happily mentors others – carries the excitement of following the science where it leads. He gravitates toward riskier projects but is aware these investigations are harder to get funded.

“We have a pretty good time in the lab. It’s quite a vibrant environment, and I try to make sure everyone’s having fun. No one wants to come to work every day and be miserable. Science is not easy. It can be tough, projects fail,” he said, adding: “You learn something from every failed experiment.

“They teach you what not to do,” he said with a laugh.

Visit In Pursuit to read this full story. 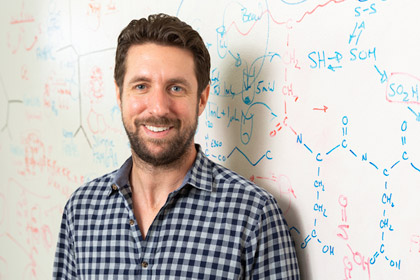