As an arctic blast plunged temperatures near zero for days in mid-February, researchers on UT Southwestern’s South Campus worked feverously in laboratories to lower temperatures even further.

The goal of Dr. Philipp Scherer and postdoctoral fellows Drs. Jan-Bernd Funcke and Leon Straub was chilling – initially toiling in the dark on Feb. 15 in the Touchstone Center for Diabetes Research and the associated Metabolic Phenotyping Core to preserve years of research stored in the minus 80°C freezers that were warming as a consequence of ongoing power outages. Later, they worked to protect the Center’s analytical tools and servers as burst water pipes flooded several floors in the Cecil H. and Ida Green Science Building. 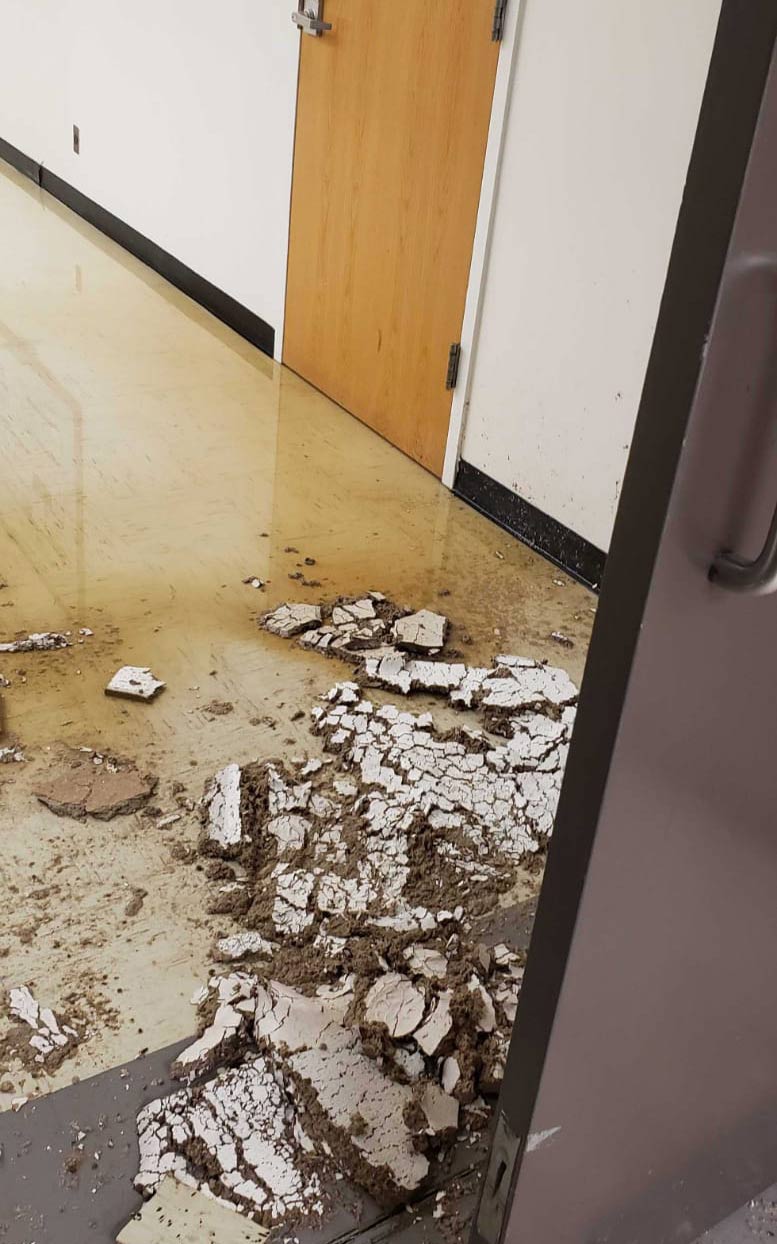 “Our entire research infrastructure was threatened, and only a few researchers were present when the power outage hit the Green Science Building,” said Dr. Straub. “First there were fire alarms, then power was lost. The crisis climaxed when the fifth floor and later the fourth floor were flooded.”

During the first day, Drs. Funcke and Straub moved all cells growing in the usually constant 37°C environment of the Green Science Building’s cell culture incubators to backups in the adjacent Philip R. Jonsson Basic Science Research Building. By evening, as power didn’t return, manhandling the bulky freezers became the focus of the trio’s efforts.

“The power outage affected nearly all of the Center’s minus 80°C units as well as a minus 150°C freezer, harboring years of research,” said Dr. Funcke. “There was insufficient space in the backup freezers in the Jonsson Building to relocate the samples, and no dry ice was available to stuff the freezers with to keep their temperatures sufficiently low. Working with headlamps in the dark, we physically relocated several freezers. We had to sift through numerous Jonsson Building rooms to find free high voltage power sockets that could support minus 80°C freezers. We worked until well after midnight trying to save whatever possible.”

By Feb. 16, power was restored, but the situation didn’t ease as the flooding got worse. The scientists again got to work, covering up machines with protective plastic and removing water from the floor.

“Once the professional cleaners moved in, we were all exhausted but relieved because the power was back on,” said Dr. Straub. “Then late on Feb. 17, power was lost in the Jonsson Building, where we had transported the freezers, biological samples, and cultured cells.” 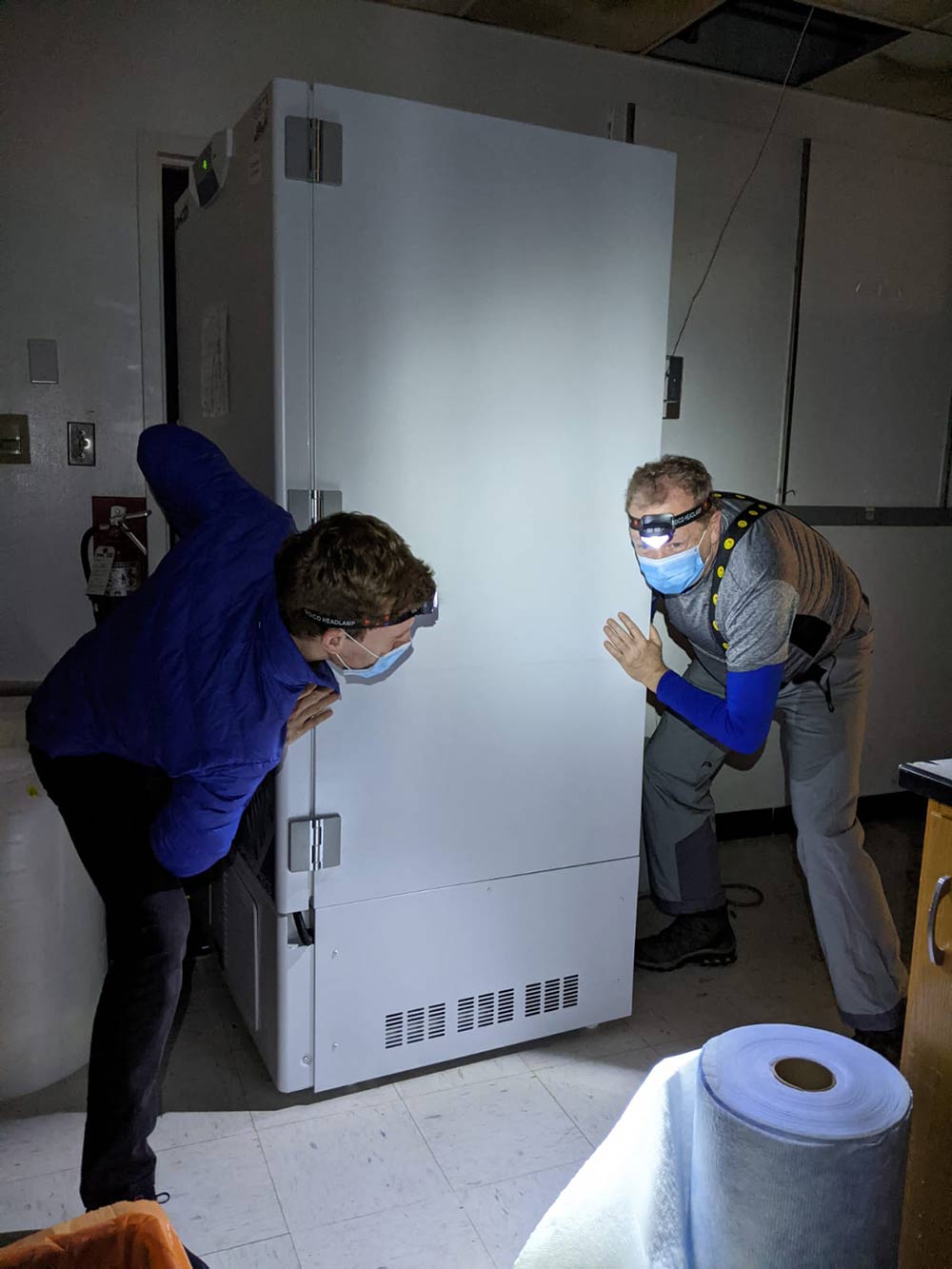 Dr. Scherer (right) and postdoctoral fellow Dr. Leon Straub work to relocate a heavy minus 80°C freezer to the Philip R. Jonsson Basic Science Research Building by shimmying it through a narrow doorway.

“Many rooms in L5 and L4 had flooded with several inches of water, some of which was dripping from the ceiling onto the data server of the Center as well as the expensive and delicate mass spectrometry instruments of the Metabolic Phenotyping Core,” Dr. Funcke recalled. “Colleagues from the lab spent the morning collecting and carrying out the water and covering vulnerable equipment with plastic bags and foils. Leon and I also searched local hardware stores for additional tools and extension cords.”

Dr. Scherer, Director of the Touchstone Center, said the two postdoctoral fellows were available around the clock for several days to help him fight a heroic battle that started on Feb. 15. “They deserve a lot of credit for helping out and rescuing a lot of equipment and irreplaceable samples,” he said. “All of the biologicals and cell lines that were stored in the cryo and ultra-cryo freezers were saved thanks to the action that night.”

The Center’s computer server units on L4 suffered significant damage due to flooding, but the mass spec instrumentation room was largely spared, Dr. Scherer said. “A couple of computer units were lost, but all of the mass specs were saved and the worst was prevented by covering up the instruments,” he said. “I consider us lucky, as the damage could have been catastrophic. We’ll have to cope with several weeks of operational delays due to clean up and remodeling, but our Facilities Management people are showing a terrific effort with this monumental task.”

Drs. Straub and Funcke jumped in and did their part while negotiating challenging home situations. “I still had running water and power Monday morning, but Leon’s apartment had been without power throughout the night,” Dr. Funcke explained. “I took in Leon, his wife, Abbey, as well as their dog from Monday to Wednesday. I slept on a chair in my living room from Monday to Tuesday and on the couch of another friend from the Center from Tuesday to Wednesday. On Tuesday, a water pipe burst in my apartment building, and we had to make use of the restrooms on North Campus. By Wednesday morning, my electricity was turned off as well, but fortunately power returned to Leon’s and Abbey’s apartment, to which we, including another friend, moved until Thursday.”

Dr. Straub added, “We all tried our best. Colleagues supported each other and leadership was shown by Philipp Scherer. We are closer now, but I would have preferred us to do some silly canoeing trip to bond instead.”