David Russell, Ph.D., whose four-decade career at UT Southwestern included serving as Dean of Basic Research for the last 11 years, has been appointed Professor Emeritus of Molecular Genetics in honor of his contributions. Recently retired, Dr. Russell also held the titles of Vice Provost and the Eugene McDermott Distinguished Chair in Molecular Genetics.

“In addition to being an accomplished researcher and scientist, Dr. Russell has been a great friend, mentor, and trusted colleague to hundreds of faculty members, students, and learners throughout his four-decadeslong career at UT Southwestern,” said Daniel K. Podolsky, M.D., President of UT Southwestern.

Early collaborators with Dr. Russell were UTSW Nobel Laureates Michael Brown, M.D., and Joseph Goldstein, M.D., whose discoveries on the regulation of cholesterol metabolism jointly earned them the 1985 Nobel Prize in Physiology or Medicine. 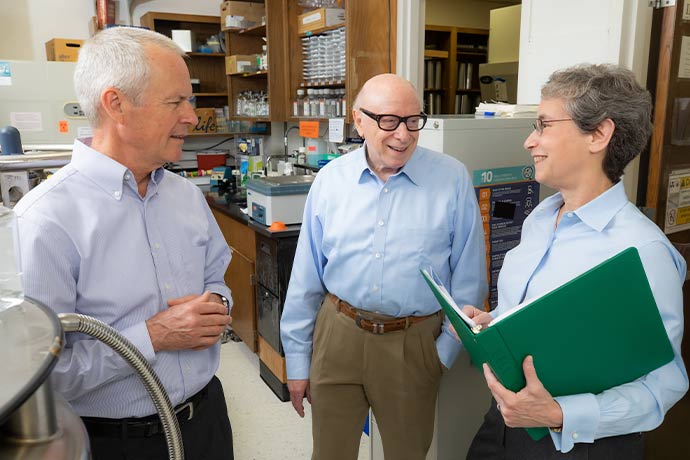 “It has been an immense joy to witness the growth, development, and magnificent achievements of David Russell,” said Drs. Brown and Goldstein in a joint statement. “David trained at the University of British Columbia with Michael Smith, the Nobel Laureate who developed the technology that permits the introduction of targeted mutations into DNA. David brought molecular biology to Dallas at a time when our campus was far behind the leader in this newly emerging field.

“After joining our Department in 1982, he soaked up the field of cholesterol metabolism like a sponge clearing spilled ink. His deep understanding allowed him to become the world leader in the identification of genes that mediate the transformation of cholesterol into steroid hormones and bile acids. Along the way, he elucidated the genetic basis of several diseases. This work earned him election in 2006 to the National Academy of Sciences at a relatively young age,” they added.

Hired initially as Assistant Professor of Molecular Genetics, Dr. Russell spent his entire academic career at UT Southwestern. With postdoctoral training at the University of British Columbia in sequencing, mutating, and manipulating DNA, he arrived at UTSW ready to work toward a central goal with Drs. Brown and Goldstein: cloning the low-density lipoprotein (LDL) receptor, a cell surface receptor that shuttles the body’s main cholesterol carrier from the bloodstream to the interior of cells. Though this task was a monumental undertaking given the tools then at hand, the research team accomplished this feat in 1983.

After collaborating with Drs. Brown and Goldstein for another four years elucidating various aspects of LDL receptor function and the molecular genetics of a disease related to the LDL receptor called familial hypercholesterolemia, Dr. Russell launched an independent research career investigating the biochemical pathways that mammalian cells use to degrade cholesterol and other sterols. Over the next quarter century, the Russell lab made numerous contributions to this field, including elucidating the complex, multistep pathway by which cholesterol is broken down into bile acids; understanding the pathway involving cholesterol conversion into androgens; and studying the process by which vitamin D is produced from a sterol.

Along the way, Dr. Russell and his colleagues cloned and discovered the function of many related genes, contributed to the knowledge of diseases related to cholesterol and sterol metabolism, and made discoveries that played an important role in the development of drugs to treat these conditions. Just this summer, for example, the pharmaceutical giant Merck announced a first-in-kind kidney cancer drug that acts on HIF-2α, a protein first discovered at UTSW in the 1990s by Professor of Biochemistry Steven McKnight, Ph.D., in collaboration with Dr. Russell and his lab. 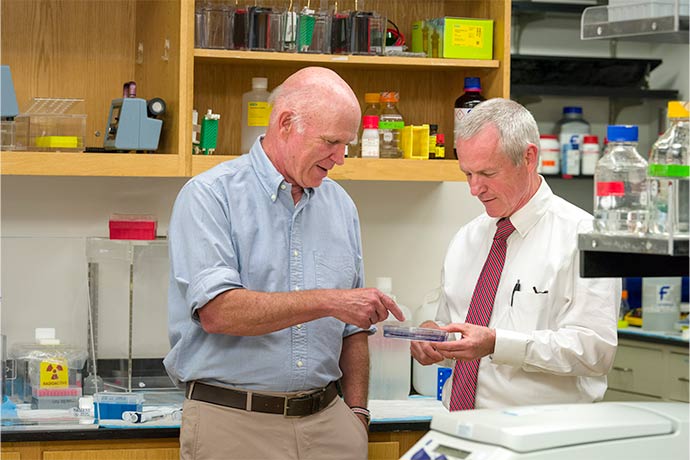 Dr. Russell (right) and Dr. Steven McKnight collaborated on research that led to the discovery of the protein HIF-2α, work that later resulted in a first-in-class kidney cancer drug approved for use.

In late 2010, Dr. Russell became the first Dean of Basic Research, a role created to champion basic science across UT Southwestern and ensure that the institution remained at the forefront of modern biomedical research. In recent years, Dr. Russell expanded UT Southwestern’s research portfolio, starting several new departments including Biophysics, Bioinformatics, and Biomedical Engineering. His efforts have kept the institution abreast of available technology, implementing a significant investment in cryo-electron microscopy – an imaging technology that allows visualization of proteins at the atomic level by freezing them in place – and computing power, ushering in a new realm of discoveries made through computational biology and artificial intelligence.

“After his appointment as Dean of Basic Research, David learned everything about everyone in the basic sciences – not only at UTSW, but nationally. This knowledge base, coupled with his skill at clear writing, allowed him to nominate successfully many of our faculty for national and international awards,” said Drs. Brown and Goldstein. “His wise and unbiased judgments earned him the respect and trust of academic leaders on our campus. David’s contributions to UTSW are enormous and he will be deeply missed.”

Through the years, Dr. Russell has earned numerous awards and honors, including election to the American Academy of Arts & Sciences in 2011. He has also served on the boards of several scientific journals.

“Despite these accomplishments, David’s growth was only just beginning. He has an amazing ability to master and command detail. This skill allowed him to be the driving force in a crucial edition of Molecular Cloning, the manual of techniques that lay open at the bench of every graduate student working with genes,” said Drs. Brown and Goldstein of the book Dr. Russell co-authored with the late Joseph Sambrook, Ph.D., a UTSW colleague.

Dr. Russell was born in Dallas in 1954 to British immigrant parents who, after processing through Ellis Island, rode a tandem bicycle from New York to Paris, Texas, in 1952. Describing himself as a lackluster student in his youth, Dr. Russell became passionate about science as an undergraduate at UT Austin, where he majored in biology and minored in chemistry. After receiving his Ph.D. in chemistry from the University of North Carolina at Chapel Hill, he completed postdoctoral training at the University of British Columbia.

Now retired, Dr. Russell said he plans to continue making contributions to science in a completely different field, collaborating with an archaeologist colleague at Southern Methodist University in Dallas to better understand the peopling of the Americas.

“I have no bucket list. I have accomplished everything I’d ever hoped to accomplish in science,” Dr. Russell said. “But, I may still have more papers to publish yet.”

Dr. Brown, a Regental Professor, is Director of the Erik Jonsson Center for Research in Molecular Genetics and Human Disease. He holds The W.A. (Monty) Moncrief Distinguished Chair in Cholesterol and Arteriosclerosis Research and the Paul J. Thomas Chair in Medicine.

Dr. Goldstein, a Regental Professor, is Chair of Molecular Genetics. He holds the Julie and Louis A. Beecherl, Jr. Distinguished Chair in Biomedical Research and the Paul J. Thomas Chair in Medicine.