Although cancers come in many forms, they all have a lower pH than normal tissue. Pharmacologist Jinming Gao, Ph.D., and head and neck surgeon Baran Sumer, M.D., have been working together for years on a pH-sensitive technology that can help surgeons more precisely excise tumors and help anti-tumor drugs get exactly where they need to be. 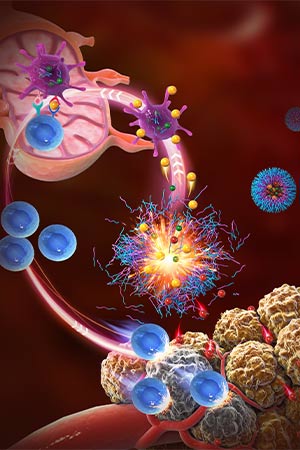 The core technology is polymeric micelles that release their payload after entering an acidic environment, like that surrounding the cancer cells. The first adaptation of the technology, pegsitacianine, carries fluorescent dyes that illuminate the boundaries of solid tumors for real-time surgical imaging. It has been licensed by OncoNano Medicine Inc., a startup co-founded by Drs. Gao and Sumer, and is currently in Phase 2 clinical trials for multiple tumor types and has received a fast-track status from the Food and Drug Administration. Drs. Gao and Sumer are members of the Harold C. Simmons Comprehensive Cancer Center.

The second adaptation, PC7A, is considered a “nanovaccine” against cancer. These nanoparticles carry tumor antigens to immune cells, leading to the production of tumor-specific T cells that kill cancer cells. The target for the particles is the adaptor protein STING (stimulator of interferon genes), which begins the immune response. Unlike the many small-molecule STING agonists that have been developed since its discovery in 2008, PC7A nanoparticles travel directly to immune cells in the lymph nodes, increasing their concentration in the targeted cells and causing fewer side effects. 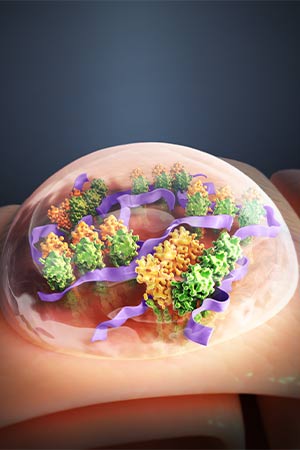 A polyvalent STING agonist prolongs the activation of innate-immunity pathways through the formation of STING condensates.

In a paper published in Nature Nanotechnology in 2017, the researchers showed that PC7A was effective against multiple tumor types in mice, including melanoma, colorectal, and HPV-related cancers of the cervix, head, neck, and anogenital regions. Further work on the technology led to a Nature Biomedical Engineering paper earlier this year, which shows that PC7A binds to a different site on STING than other drugs, leading to a more robust T cell response against multiple solid tumors. OncoNano is working to begin a first-in-human study in early 2023.

A third adaptation reverses a tumor-defense strategy. The increased glucose metabolism of cancer cells produces excess lactic acid that is pumped out of cells via monocarboxylate transporter-1 (MCT1) proteins. The resulting acidic tumor microenvironment inhibits the function and survival of cancer-killing T and NK cells. Using pH-sensitive micelles, the research team was able to deliver an MCT1 inhibitor (AZD3965) that was only released where there was acidosis, overcoming cardiac toxicity when the drug is used alone. Initial results in animal models, published last year in Advanced Healthcare Materials, showed significant tumor growth inhibition and increased survival when combined with anti-PD-1 therapy.

Due to the promising nature of these and other findings, OncoNano announced a multiyear collaboration with UTSW and Dr. Gao’s laboratory in September, and Dr. Sumer was recently awarded an R01 grant from the National Institutes of Health to test the use of the fluorescent nanoparticles in detecting head and neck cancer. Drs. Gao and Sumer are also leading a Cancer Moonshot Nano-Immune-Engineering Center to advance the pH-sensitive nanotechnology for cancer immunotherapy.

Dr. Gao serves as the consulting chief scientific officer for OncoNano. Drs. Gao and Sumer each have financial interests in OncoNano, as does UT Southwestern.