UT Southwestern scientists have identified a previously unknown mechanism by which yeast cells regulate the production of mevalonate, a form of cholesterol. The findings, published online in eLife, could eventually lead to new ways to fight high cholesterol, a known risk factor for cardiovascular disease in humans.

“It’s exciting that in yeast, there’s a previously unappreciated way to regulate mevalonate,” said study leader Dr. W. Mike Henne, Assistant Professor of Cell Biology and Biophysics at UTSW and a member of the Harold C. Simmons Comprehensive Cancer Center. “This may be an important regulatory mechanism for cholesterol in our cells too.” 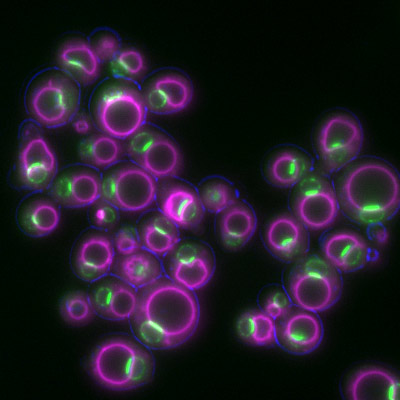 In this image, yeast are exposed to an acute shortage of glucose, which drives the spatial partitioning of HMGCR (green) to a patch on the nuclear envelope adjacent to the vacuole/lysosome (magenta). This spatial compartmentalization enhances HMGCR enzyme activity and helps yeast adapt to glucose shortage.

To discover this new cholesterol-regulating mechanism, Dr. Henne,  Sean Rogers, a graduate student in Dr. Henne’s lab, and their colleagues deprived yeast of glucose, its preferred fuel source. Without sufficient glucose in their growth media, these microbes turn up production of mevalonate.

Looking for clues in how the microbes boost mevalonate amounts, the scientists used microscopy to visualize HMG-CoA reductase (HMGCR), the enzyme that facilitates mevalonate synthesis. They found HMGCR in the nucleus-vacuole junction (NVJ), a bridge between the cell’s nucleus and organelles called vacuoles that act as compartments for metabolic reactions. Indeed, while HMGCR was found all across the nucleus surface in glucose-fed yeast, it compartmentalized into this tiny NVJ patch in glucose-starved yeast.

This smaller area didn’t reduce the amount of HMGCR, Mr. Rogers said. On the contrary, the abundance of this enzyme changed only a little, but its activity increased dramatically

Further investigation showed that when high mevalonate production is needed, the spatial partitioning of HMGCR at the NVJ helps bring more HMGCR enzymes together to form the multi-copy groups of the enzyme necessary to enhance its activity. Consistent with this, when the researchers used a technique to artificially force HMGCR to form tetramers, this fixed the issues with HMGCR activity when the NVJ was deleted. 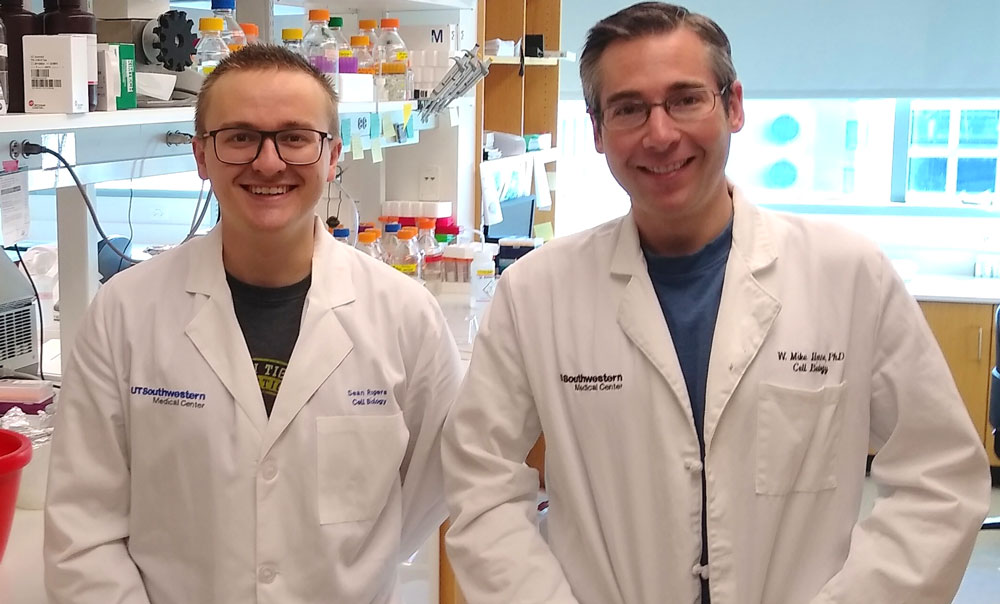 “The NVJ appears to be an organizational platform that helps cells respond to several kinds of stress,” Mr. Rogers said. “By studying this platform in yeast, we may eventually be able to teach our cells new and healthier ways to respond to the stress that causes disease.”

Other UTSW scientists who contributed to this study include Hanaa Hariri, N. Ezgi Wood, and Natalie Speer.