Dr. Namirah Jamshed exchanged warm greetings with her patient and held her hand under the blanket. They’d known each other for years, and the visit in the patient’s home was much appreciated.

“I love her because she’s very nice,” said the patient, Patricia Graham, a 71-year-old Dallas woman who is paralyzed because of multiple sclerosis. “I just love to see her.”

Later in the visit, Dr. Jamshed, Ms. Graham, and her sister clasped hands as Dr. Jamshed taught them how to take a pulse. 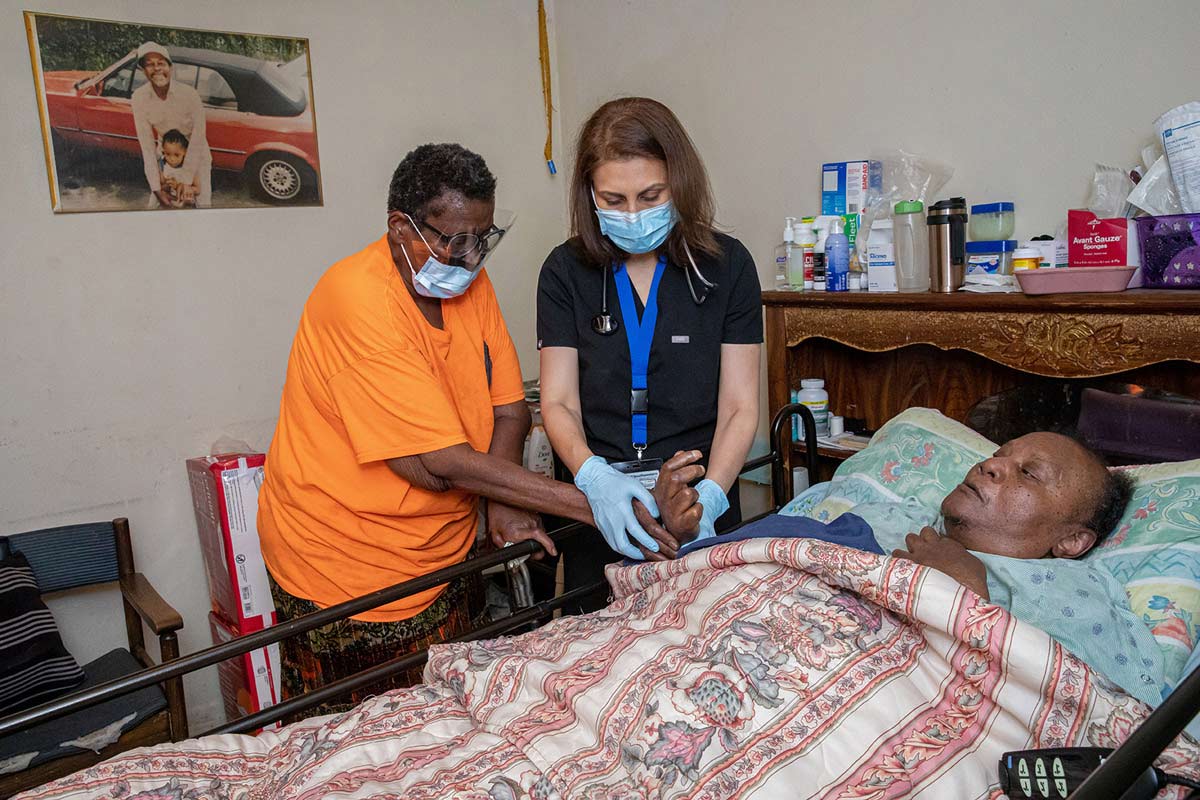 Dr. Namirah Jamshed teaches Sarah Graham how to check the pulse of her sister Patricia Graham.

This is the kind and effective work of COVE, Care Of the Vulnerable Elderly, a program created by Dr. Jamshed that provides in-home primary care visits for the elderly in Dallas.

“These are patients who require a lot more follow-up, which is something you cannot do in a clinic,” said Dr. Jamshed, an Associate Professor of Internal Medicine and Family and Community Medicine.

COVE started in 2015 as a way to reduce the high level of emergency department visits and hospitalizations among the elderly, which can be expensive and, most importantly, hard on patients who are often frail. In recent months, COVE has become even more valuable – an almost certain lifesaver – as the COVID-19 crisis has forced the vulnerable elderly population to stay at home as much as possible to avoid contracting the highly contagious SARS-CoV-2 virus. 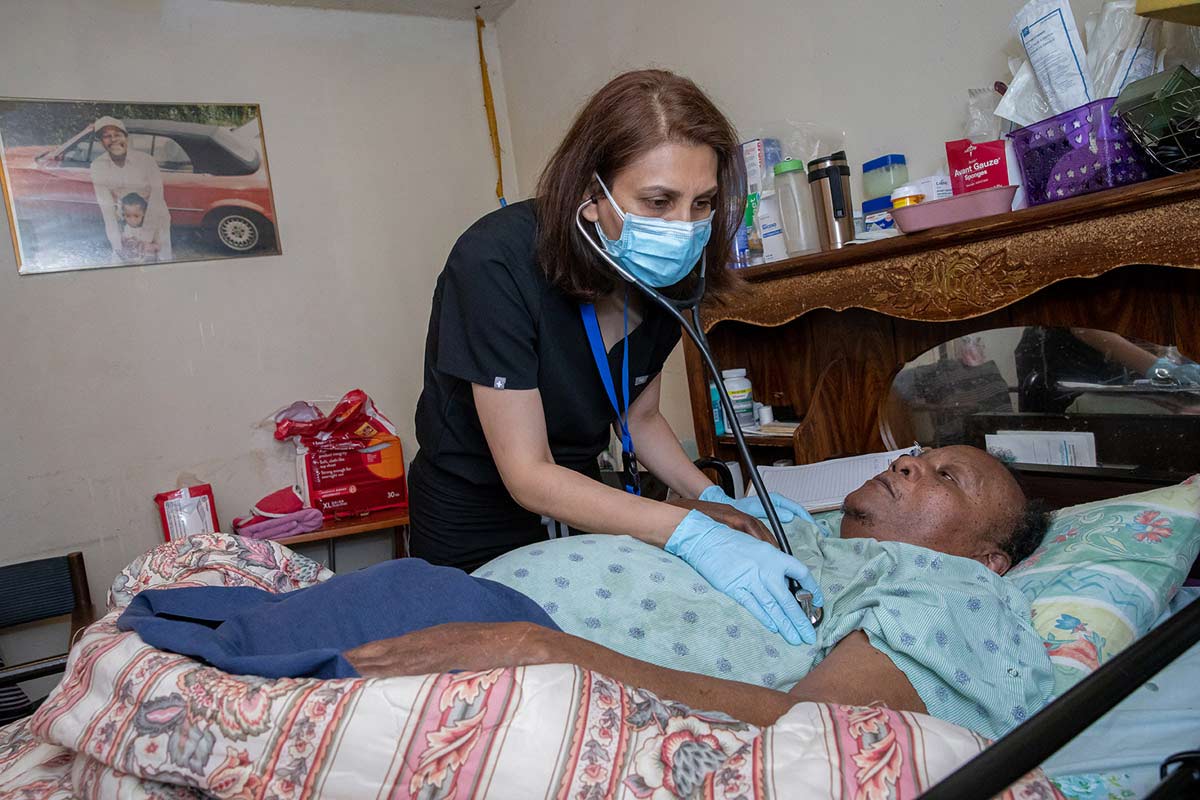 Supported by the Mildred Wyatt and Ivor P. Wold Center for Geriatric Care, COVE serves patients, 65 and older, who are referred by a UT Southwestern clinic because they have functional or cognitive difficulty for in-clinic visits. The program serves 325 patients who live within 10 miles of UT Southwestern with a care team including three physicians, three nurse practitioners, a registered nurse, a licensed social worker, and a clinical coordinator.

Because of its success, COVE was invited to be part of an effort to develop national benchmarks for elder care, one of only nine programs tapped by the Learning Collaborative for Home-Based Medical Care at the John A. Hartford Foundation. The New York-based foundation is a leader in the geriatrics field, having granted more than $565 million to improve the health and well-being of older people. Work on the new benchmarks is scheduled to begin in September.

When nonurgent patient visits had to be stopped because of COVID-19 shutdowns, the COVE team temporarily switched to telemedicine. While there were some struggles getting older patients to learn technology they were not familiar with, the UTSW caregivers had established enough trust with patients to help them conduct the video visits. One added benefit was the ability to allow family members to join from any location.

Home visits were reinstated once state and local stay-at-home orders were lifted. While telemedicine was a success overall, there were limitations. In the weeks after home visits were halted from mid-March to early May, the COVE team saw a rise in patients calling in with medical problems. COVE team members believe these were problems that probably would have been prevented if the visits had not been interrupted.

“We started getting more urgent calls on the phone,” Dr. Jamshed said. “The needs were starting to declare themselves.” 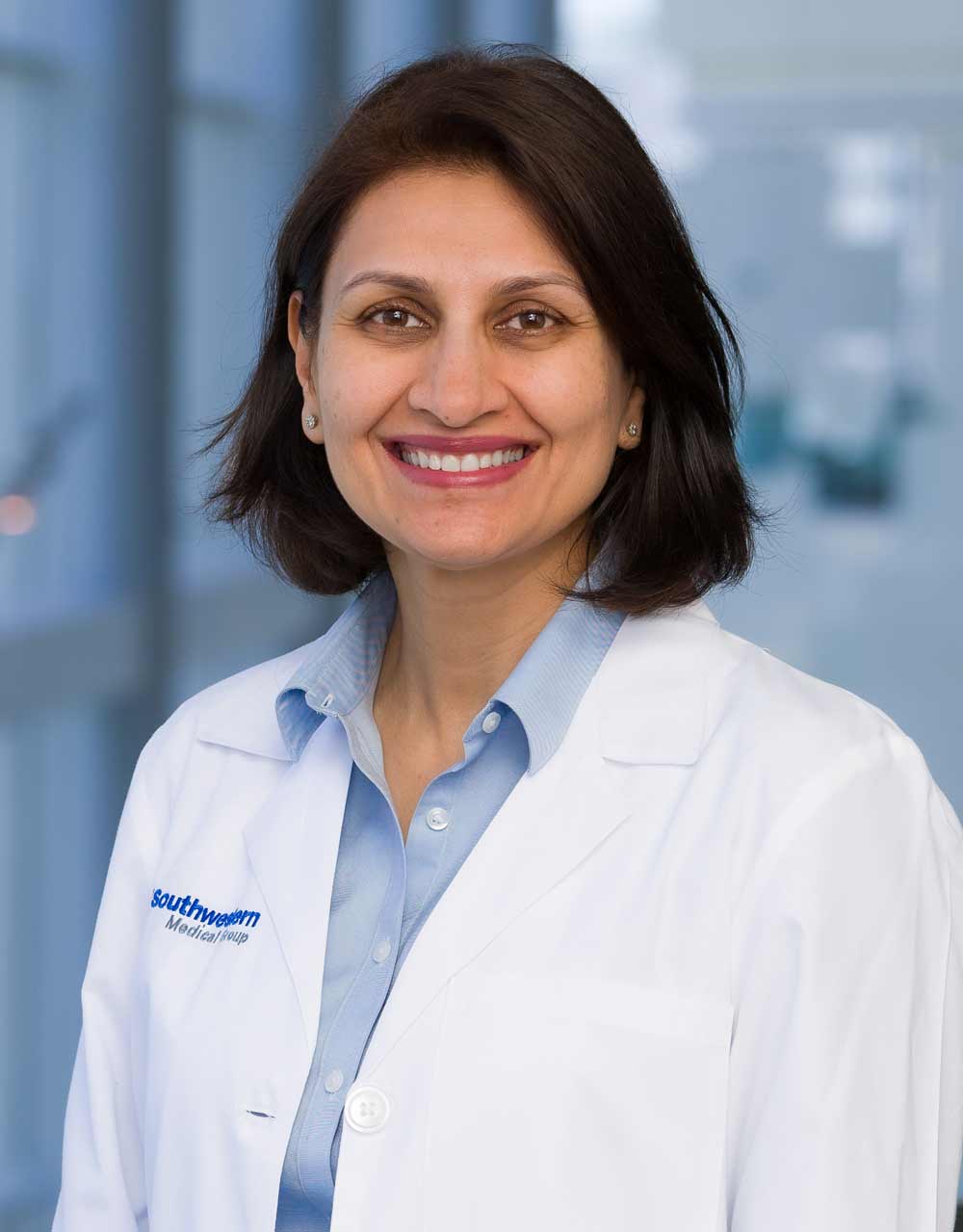 Mihoko Abegunde, a nurse practitioner for the COVE program, said loneliness also became a major concern among their patients. Depression has been scientifically shown to exacerbate dementia, so the COVE team was eager to reconnect in person with their patients, Ms. Abegunde said. While patients were satisfied with the telemedicine visits, they preferred to have COVE team members in their homes, making personal connections. On average, COVE patients receive a home visit from a physician three to four times a year and a visit from a nurse practitioner every six to eight weeks.

“There’s something about talking to somebody face to face that’s better than the video, but I do very well with the video,” said Marilyn Rubin, a 95-year-old patient with kidney failure.

She said the COVE program has been a lifeline.

“It is fantastic. If anything, they saved my life,” she said.

Ms. Abegunde said the bonds are strong in both directions.

“I realized how much I really needed to see patients face to face,” she said. “I really missed seeing the patients, and they told me the same thing.” 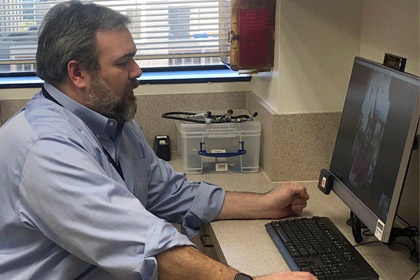