Dr. Natasha Corbitt describes her dual role as surgeon and scientist as a privilege.

“As a pediatric surgeon, I have the opportunity to have a long-term impact on someone’s life because I’m treating patients as children. When I am operating on neonatal or premature babies, I feel lucky to be able to give them a fighting chance,” she said. “And then I can take that information into the lab and think about how I can make the life of the next patient better.”

In September, Dr. Corbitt joined UT Southwestern as an Assistant Professor of Surgery and as a pediatric surgeon at Children’s Medical Center Dallas. When she completed her pediatric surgery fellowship at the University of Michigan in July 2020, she became the first Black female pediatric surgeon in the United States to also hold a Ph.D. Hers is in cellular and molecular pathology.

Watch: This is my why

“I have always been conscious of the rarity of Black women in academic surgery. It’s very easy to recognize that I’m the only one who looks like I do in a lot of different spaces, but I never set out to be the first of anything,” she said.

Early on, Dr. Corbitt learned how to tackle something that was unfamiliar. She became the first in her family to graduate from college after completing high school at age 16 and entering Howard University on a full academic scholarship. Growing up in Atlantic County, New Jersey, her family members primarily worked in the casino business. As a preteen, she watched her brother survive a severe illness, which influenced her to become a doctor.

“My family spent so much time at the hospital and that’s what really inspired me to want to be a doctor – watching the team of people that took care of my brother,” she said. “So after that, even though I hadn’t come from this legacy of doctors, I just focused on what steps I needed to take to get where I wanted to go.”

Although Dr. Corbitt entered college focused on becoming a physician, a research internship after her freshman year opened her eyes to a career as a surgeon-scientist. She said research provides a different way to use her mind.

As a student, Dr. Corbitt faced many critics who questioned her ability to successfully pursue such a challenging path, but a research fellowship centered on vaccines that she completed at the University of Pennsylvania helped solidify her passion to become a physician-scientist. Today, she said her clinical and research sides are never not working together. She routinely performs surgeries for congenital pediatric disorders. The smallest child that Dr. Corbitt has ever operated on weighed just 500 grams at 24 weeks old, while the oldest have been patients in their 20s.

“My main research goal is to understand why kids get biliary atresia, which is the No. 1 reason that kids end up needing a liver transplant. And that isn’t ideal because of how long the liver then needs to last when transplanted at a young age,” Dr. Corbitt said. 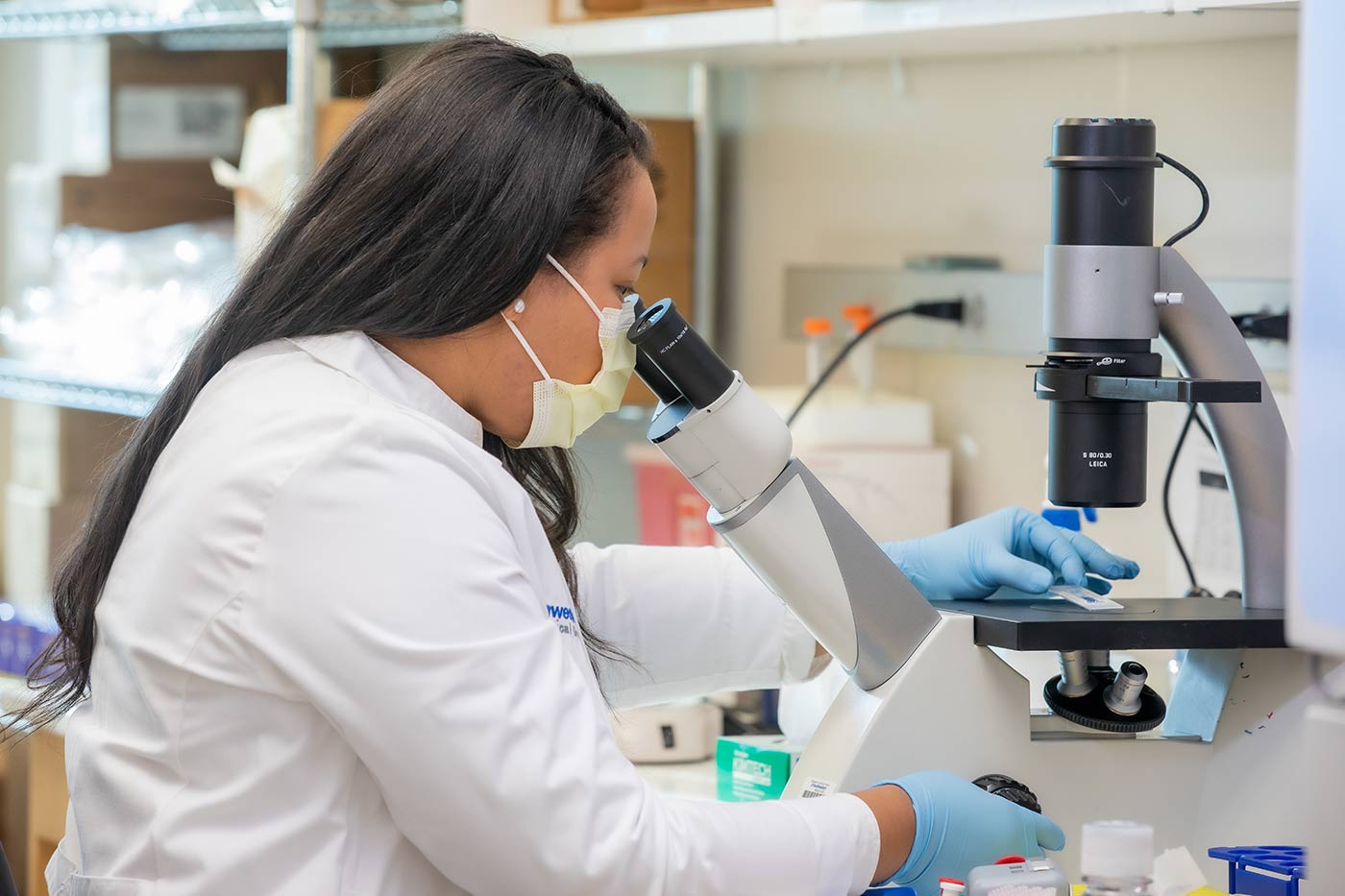 Biliary atresia (BA) occurs in neonates and infants where the bile duct outside of the liver becomes scarred and blocked, leading to a buildup of bile in the liver that damages the organ. Approximately two-thirds of BA patients will undergo liver transplantation before reaching adulthood.

“Because I love liver surgery so much, that drew me to wanting to understand biliary atresia better. One of the operations for biliary atresia is a Kasai portoenterostomy, which doesn’t always work, and many times children will still need a liver transplant. So it’s an operation that leaves me wanting to do more for children and their families,” she said.

Dr. Corbitt, who looks forward to having her own lab one day, said coming to UTSW affords her access to valuable resources to help her grow as a scientist.

“I think it’s important being in a cultivating environment with access to state-of-the-art facilities and some of the brightest minds in the country. So I couldn’t think of any other place to be,” she said. “There are also so many other resources at UT Southwestern. Coming here is a unique opportunity, to be able to bridge the research bench to the bedside and to really do impactful work that I think is difficult to do in some other places.”

A better path for others

The surgeon-scientist said she also made a conscious decision to work at an academic medical center because of the exposure to students and trainees. Although she has benefited from mentors of varying backgrounds, she said there is value for minority students and trainees to see doctors and scientists who look like them. Dr. Corbitt is in a unique class in surgery, as only 16 Black women have become pediatric surgeons in the U.S., according to a list from the Society of Black Academic Surgeons and the American Pediatric Surgical Association.

“Along every step of the way, I rarely saw anyone who looked like me who did the job I wanted to do. Initially I found that discouraging. But later it motivated me because I felt I owed it to kids to show them that someone who looks like them could do this work,” she said.

“I do feel an obligation to help aspiring doctors get to wherever they want to go. My goal is to make it less painful to go through this process if this is what others choose for their future and to be a resource and support system for underrepresented minority students and residents,” Dr. Corbitt added. 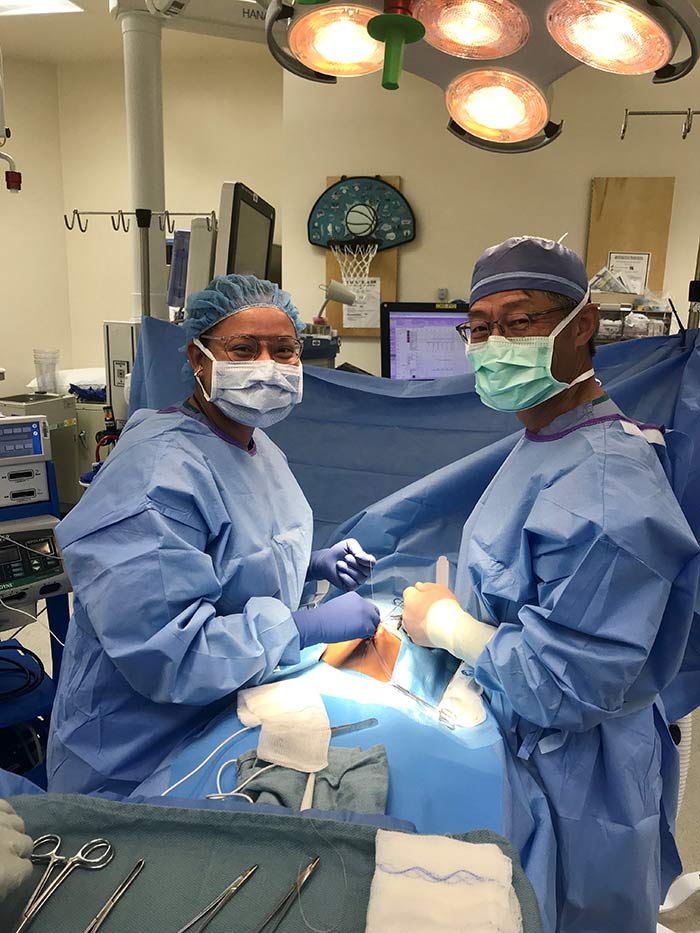 Dr. Corbitt performs surgery as a resident at Vanderbilt University Medical Center with mentor Dr. Dai Chung. Dr. Chung, who now serves as Chief of the Division of Pediatric Surgery at UTSW, recruited Dr. Corbitt to the Medical Center.

Dr. Corbitt was recruited to UTSW by her mentor, Dr. Dai Chung, Chief of the Division of Pediatric Surgery and Professor of Surgery, whom she had previously worked with when she was a resident at Vanderbilt University Medical Center.

As she settles into her new position at UTSW and Children’s, she advises others pursuing a similar path that it’s important to be open to new experiences that can lead to an unexpected outcome.

“It does feel surreal getting to this place where people said I wouldn’t be able to do this,” she said. “But now I’m really happy. I never really wanted to do anything that made me miserable or treated people poorly, so I am really content I made it here.”