After more than 50 years, the enduring impact of a little-known Vietnam-era program at the National Institutes of Health (NIH) that jumpstarted the careers of four Nobel Prize-winning scientists, including UT Southwestern’s Drs. Michael Brown and Joseph Goldstein, is being revealed in a book.

Medal Winners: How the Vietnam War Launched Nobel Careers, written by Dr. Raymond S. Greenberg, captures the traits, triumphs, and troubles of the four scientists – Drs. Brown, Goldstein, Bob Lefkowitz, and Harold Varmus – who in 1968 all began their post-medical school scientific training at the NIH’s Clinical Associate Training Program. The two-year research assignment, approved by the U.S. government as federal service, exempted participants from the so-called “doctor draft.” In all, nine future Nobel Laureates were selected for training by the NIH as either Clinical or Research Associates between 1964 and 1972.

“The NIH program was more an accident of history than a conscious decision to create a pipeline of great physician-scientists,” said Dr. Greenberg, who served as Executive Vice Chancellor of the UT System from 2013 to March 2019. “Since it was one of the few alternatives to being drafted as a military doctor, the competition was fierce, and those selected were some of the brightest medical graduates in the country.” 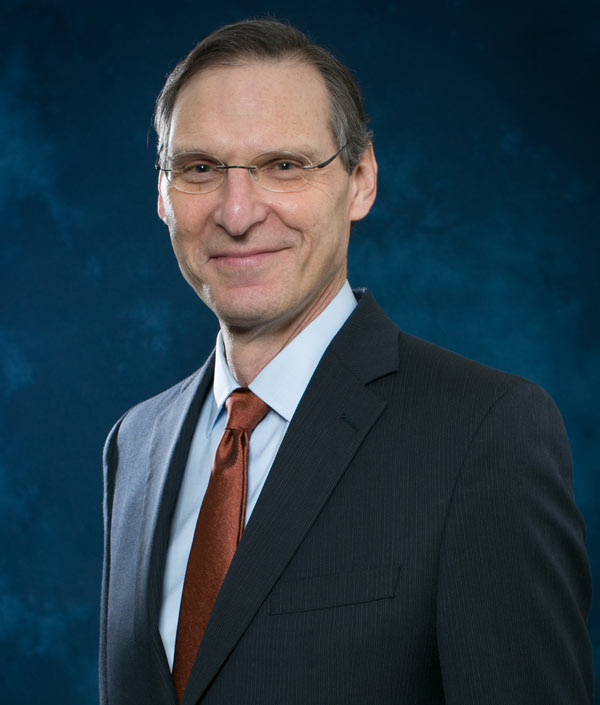 Dr. Greenberg said Medal Winners was initially inspired by a 2012 article in Science by Drs. Brown and Goldstein titled “A Golden Era of Nobel Laureates.”

“I really did not know much about this NIH program, and it seemed to me to be an important piece of medical history to explore in greater depth. It would have been too challenging to write about all nine of these brilliant scientists, so I chose to focus on the year 1968 when four of them started,” he explained. “When the program was created, I don’t think anyone had in mind that they would be training the leaders of the next generation of academic medicine – it just turned out that way. Even more impressive are the landmark contributions to biomedical research that these former trainees produced.”

Friends and scientific collaborators for 54 years, Drs. Brown and Goldstein have cast long shadows across the UTSW campus since sharing the 1985 Nobel Prize in Physiology or Medicine for their groundbreaking discovery of the low density lipoprotein (LDL) receptor that is the basic mechanism of cholesterol metabolism. Their findings ultimately led to the development of statin drugs taken by millions worldwide to lower cholesterol levels and reduce the risk of heart disease. 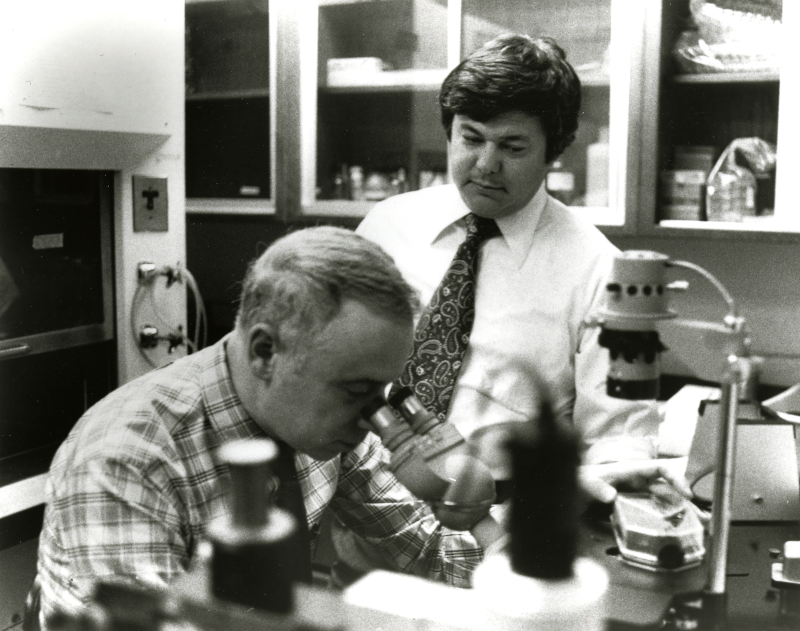 Dr. Joseph Goldstein (left) and Dr. Michael Brown are shown in their lab in 1985.

The UTSW scientists, who have led a laboratory together since 1972, jointly hold 30 U.S. patents and shared the Albany Medical Prize in 2003 for discovering a family of membrane-bound proteins called sterol regulatory element binding proteins and how they control the synthesis of cholesterol and fatty acids. They continue to be outstanding academic leaders and mentors to graduate students, postdoctoral fellows, and younger colleagues, including many who went on to be honored for their own storied achievements.

Drs. Varmus and Lefkowitz, meanwhile, also have enjoyed great success, having received Nobel Prizes in 1989 and 2012, respectively. Now at Weill Cornell Medicine, Dr. Varmus shared the Nobel Prize in Physiology or Medicine with Dr. J. Michael Bishop for discovering the cellular origin of retroviral oncogenes and has led the NIH (1993-1999) as well as the National Cancer Institute (2010-2015). Dr. Lefkowitz, a James B. Duke Professor of Medicine and Professor of Biochemistry and Chemistry at Duke University, has made groundbreaking discoveries that reveal the inner workings of an important family of G protein-coupled receptors, for which he was awarded the Nobel Prize for Chemistry with Dr. Brian Kobilka.

Medal Winners, published by University of Texas Health Press, provides readers unvarnished views of its subjects’ upbringings as well as a rare open window into the high-pressure clinical associate selection process – where fewer than 1 in every 25 applicants was accepted, where NIH apprentices were often taught by lab mentors who were brilliant investigators, and where quickly evolving scientific techniques and technologies were rapidly introduced and acquired.

The native of a small town in South Carolina, Dr. Goldstein went to Washington and Lee University in Virginia before attending UT Southwestern Medical School, where he was mentored by the late Dr. Donald Seldin. Brooklyn-born Dr. Brown grew up in suburban Philadelphia before attending the University of Pennsylvania for his undergraduate and medical school education. They first met in 1966 at the start of their internships and residencies at Massachusetts General Hospital.

Dr. Brown’s time at the NIH began and ended with unheard-of singularity. In the process of securing an initial lab spot, he scribbled two additional entries onto the official 13-line clinical associate application and was chosen by one of those heady additions. Then, during his second year at the NIH, his original mentor left and Dr. Brown was forced to change course after being granted what became a career-changing rare third-year extension working with Dr. Earl Stadtman, who would go on to receive the National Medal of Science in 1979 for his research of enzymes and anaerobic bacteria.

“My entire career is based on the switch that I made in laboratory mentors,” Dr. Brown said. “I had a miserable experience with my first mentor and I was very discouraged about being a scientist. After all, my primary goal was to become a great doctor. It was only after I switched mentors that I experienced the thrill of making a scientific discovery, and after that I wanted to do it again and again.”

Dr. Goldstein, meanwhile, spent his considerable lab time under Dr. Marshall Nirenberg, initially working on deciphering the genetic code and later on protein synthesis. Dr. Nirenberg’s genetic code work led to his own Nobel Prize recognition soon after Dr. Goldstein joined the lab. The basic science was balanced out with clinical work in the ward at the NIH Clinical Center. It was here that Dr. Goldstein was assigned to care for research patients, including a 6-year-old girl who had familial hypercholesterolemia, an inherited condition in which lipid levels in the blood are extraordinarily high. Investigations into treatment of this disease became the catalyst for careerlong work by Dr. Goldstein and his collaborator, Dr. Brown.

From 1970 to 1972, Dr. Goldstein completed postdoctoral work in medical genetics at the University of Washington in Seattle while Dr. Brown made significant discoveries with Dr. Stadtman before establishing his credentials as a UTSW research fellow a year before Dr. Goldstein’s return to Texas.

Gradually, they set up a merged lab arrangement. In 1974, they published seminal findings describing the LDL receptor on the surface of cells – patients with familial hypercholesterolemia have a defect in these receptors – and how the LDL receptor controlled cholesterol levels. Their work on cholesterol metabolism continued for years, laying the foundation for the pharmaceutical development of statins, which lower circulating levels of cholesterol and reduce atherosclerosis and the risk of heart attack.

Together, they brought different but complementary perspectives fostered during their time at the NIH. Dr. Brown, for instance, invariably looked at cells through their microscope’s highest magnification to see and appreciate cellular singularity. Dr. Goldstein, on the other hand, dialed it down to the lowest magnification level to view the whole pattern of the cells.

“If you look at high power, you see a lot of details but you also miss the big picture. If you look at low power, you see the big picture but you miss the details,” Dr. Goldstein recounts in the book. “There are two occupational diseases of collaboration. One is astigmatism – that’s when the two partners do not see eye-to-eye. … Then, the second is ego-titis. If two people have big egos, they often do clash.”

Medal Winners is available through UT Health Press and on Amazon.

Dr. Greenberg is special adviser to the Office of Health Affairs for UT System. 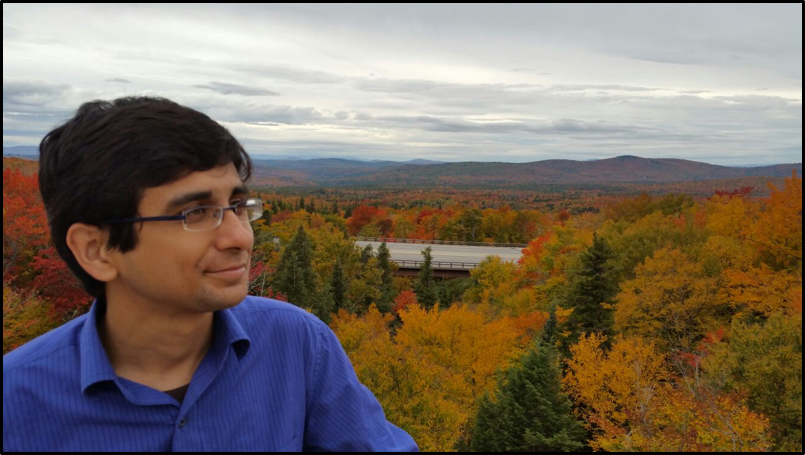