On the 50th anniversary of the Stonewall uprising, which sparked the beginning of the modern fight for LGBT rights, UT Southwestern hosted its first Pride Month celebration on South Campus.

The event, held in the D1.602 Lecture Hall, featured an inspirational song, a brief history of the LGBT rights movement, and an illuminating overview of the hurdles and strides in LGBT patient care.

Dr. Marc Nivet, Executive Vice President for Institutional Advancement, opened the program and expressed gratitude that our institution is continuing to recognize the diversity of the campus and the community we serve.

It really is wonderful to see the turnout that we have today and to see UT Southwestern continue on the perpetual journey of inclusive excellence, Dr. Nivet said.

The celebration revved up as Chris Jacobson-Chism from Cathedral of Hope church gave a rousing performance of “Visible,” an original ballad he wrote encouraging the LGBT community to shine. Cathedral of Hope, located in Dallas, is known to have the world’s largest gay congregation, with over 4,000 members.

Dr. de la Cruz, Executive Vice President and Chief Medical Officer at Parkland Memorial Hospital, is a native of Puerto Rico and member of the LGBT community. He began his presentation, “LGBTQ+ Health: Where We Are Today, Where We Can Be Tomorrow, and How You Can Help Us Get There,” by walking the audience through a timeline of significant moments in the medical, political, social, and pop culture history of the LGBT community in America. One of the most significant milestones was the Stonewall uprising in 1969, the LGBT community’s response to a brutal police raid on the Stonewall Inn, a gay bar in New York City.

Dr. de la Cruz also briefly touched on the HIV/AIDS epidemic but focused mainly on the stigmas and barriers that can affect LGBT patient care on both the patient and physician side.

In the past, a major structural barrier in the medical field was lack of recognition of same-sex partners, Dr. de la Cruz said. Lack of provider training in the late ’80s – particularly for transgender patients – contributed to physicians feeling uncomfortable with providing care to the LGBT community, although this number has declined substantially.

In the LGBT community, those who identify as transgender experience higher rates of joblessness, poverty, and lack of health insurance than their lesbian, gay, or bisexual counterparts, he said.

Transgender patients are at the greatest risk of all, Dr. de la Cruz said. These individuals also have a high prevalence of HIV, STDs, victimization, mental health issues, and suicide.

Dr. de la Cruz connected well with the audience. He made the program very personable and relatable for everyone, said Cameron Ward, a second-year medical student. He gave a lot of history that many people might not have known, but should know.

Dr. Elizabeth Paulk, Professor of Internal Medicine and Chair of the LGBTA BRG, closed the program by encouraging attendees to pick up the provided LGBT educational materials and symbols of support in the lobby, such as Pride-themed rainbow ribbons and lapel pins. 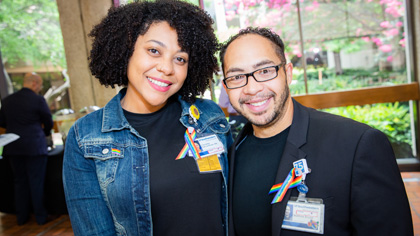 Dr. Roberto de la Cruz is the Executive Vice President and Chief Medical Officer at Parkland Memorial Hospital. He has participated in AIDS/LifeCycle, a 7-day, 545-mile bike ride from San Francisco to Los Angeles that benefits the San Francisco AIDS Foundation and the Los Angeles LGBT Center, and continues his activism in the LGBT community at Parkland. Parkland hosts two transgender clinics that serve 300 unique patients.