This story was originally posted on Center Times Plus on February 1, 2019.

Ms. Mathew, from Flower Mound, coordinates medical student volunteers at Texas Scottish Rite Hospital for Children and organizes an annual immunization fair in Irving through the Pediatric Interest Group at UT  Southwestern. She is also a clinic manager at the Union Gospel Mission for the homeless and works with the Crossroads Community Services food pantry to provide food demonstrations and cooking classes to low-income clients.

“This scholarship means so much because it validates the importance of community service,” she said before the Jan. 24 ceremony at a Eugene McDermott Plaza Lecture Hall. “I decided to become a doctor, first, to help patients with their medical conditions; however, as I learn and see more, I want to use my position as a physician to be an advocate for my patients.”

In accepting the award at the event, she called on the audience to fight injustice. As Dr. King fought for equality and civil rights in the ’50s and ’60s, “the truth is that a lot of ‘good’ people did nothing to speak up against an injustice that didn’t threaten them directly,” she said.

“We need this reminder because injustice is not going away by itself. Restoring justice is an active process of seeking out areas of injustice and doing something about it,” Ms. Mathew said.

Ms. Kromann, from Fort Worth, was recognized for her work against human trafficking in Nicaragua as well as in Dallas, and as a volunteer at the local Muscular Dystrophy Association camp. “My goal is to leave the world better than I found it by using my gifts and passions to make a difference – just like Dr. King,” she said before the ceremony.

The second finalist, Mr. Rossopoulos, described medicine as “the perfect intersection of service and science to effectively help any human being.” The Southern California native was cited for his work with a program that helps homeless people at the Union Gospel Mission quit smoking. 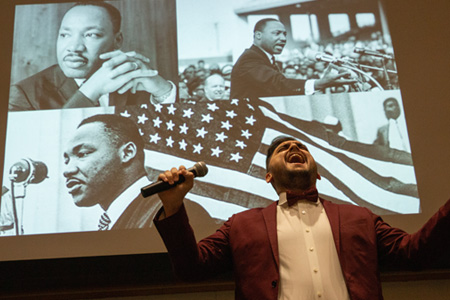 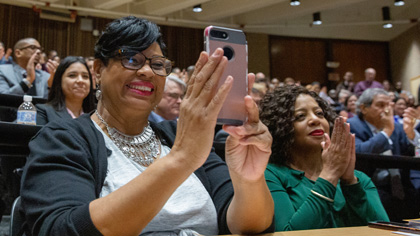