Eric Montgomery’s 2,650-mile hike of the Pacific Crest Trail (PCT) raised more than $185,000 to support research into a type of brain cancer that led to the death of his good friend’s brother. Here, the Class of 2022 UT Southwestern medical student talks about his most challenging – as well as his best –  day during his four-month journey in 2018.

What was your most daunting day, and how did you overcome its challenges?

There were many challenges along the way from Mexico to Canada – sun exposure, rattlesnakes, scorpions, avalanches, river crossings, and bears, to name a few. Perhaps the greatest challenge of all ended up being the isolation, but then again that’s why many undertake such an endeavor in the first place.

The most daunting section of the trail for me was the first stretch of the Sierra Nevada. The trail reached its apogee at Forester Pass (the highest point on the entire trail at 13,153 feet), and given my lack of prior experience with alpine trekking, this was by far the most nerve-wracking challenge of the trail. To compound matters, my group was among the earliest to enter the Sierras (in the first week of May), which meant the annual melt of the winter’s snowpack remained weeks away. Each day began at 3 a.m. to maximize the time spent hiking on hard snow before it softened in the afternoon. 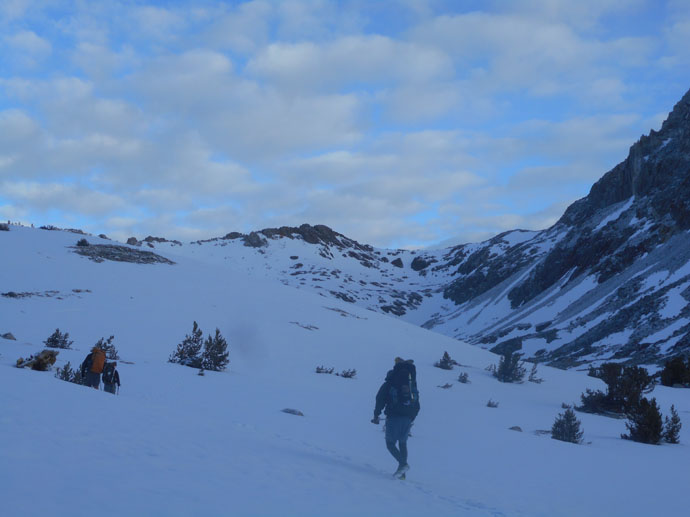 Eric approaches Pinchot Pass before sunrise in the High Sierra.

On our Forester day, we aimed to be up and over the pass before the sun reached its height. We broke camp in the dead of night, per usual, and just as our extremities had begun to warm up, we came across the day’s first obstacle. Most river crossings are quite benign, but statistically they are among the most dangerous activities to undertake along the entire trail. Eyeing the creek before us, a trace thought to the lunacy of what we were about to endure crossed my mind but was quickly replaced with addressing the task at hand. We slung our shoes over our packs and slid down the snowbank into the freezing creek. I was a frequent patron of the ice bath after football practice in college, but nothing could’ve prepared me for this. Guided by darting beams of headlamps, we safely made our way across and began drying off. Regaining feeling in your feet was a helpless cause.

After the river crossing, our group meandered over the open snowfield on Bighorn Plateau. Walking north as the sun broke the horizon, we were treated to the most incredible show of lights. All around, the jagged granite peaks danced in orange and red. It was hiking bliss.

After treating ourselves to a much-deserved snack (and morale recoup) after another painful river crossing, we began the ascent. The initial path was calm, meandering the snow-covered ridges beneath the spires surrounding us. Arriving at the base of the final ascent, we strapped on our crampons and armed ourselves with ice axes. The march up the slope was tedious, striking our toe points into the icy sheet of snow. I had never used crampons before, but oddly enough, I found the technique very similar to the way I had learned to run up a sled hill in Illinois as a kid. A deliberate climb of a few hundred feet, followed by one last tenuous traverse as we hugged the granite face, finally led us to the snow-free switchbacks (zigzagging trails cut into the side of the rock face) that would deliver us at the climactic hurdle – the ice chute.

With the early-spring conditions, the “trail” was little more than a crusty path of 6-inch-wide steps cut by ice axe into the chute of ice and snow that dropped precipitously down the side of the mountain.

Just below Forester Pass’ peak lies the most nerve-wracking 50 feet of the entire PCT. Without snow, the chute beneath Forester Pass is a narrow path, expertly engineered into the rock face, shortly before arriving at the top. With the early-spring conditions, the “trail” was little more than a crusty path of 6-inch-wide steps cut by ice axe into the chute of ice and snow that dropped precipitously down the side of the mountain.

Calming my nerves, I began tracing the steps of the hikers who had passed earlier that morning, ensuring that each crampon spike was embedded with precision in the snow. Time stood still while perched above the drop-off. Using my ice axe to brace into the mountain, I peered below. One slip and I would find myself right back where I had started in a fraction of the time it took to get here – if I missed the boulder fields. Fortunately for me that day, my crampons never gave way, and a short Class 3 scramble later, I found myself atop the highest point on the 2,650-mile trail.

Such days were the best and the worst. Often during such challenges, and even more so on the long, lonely stretches, I would think about Mikey. I would think about all that he had to endure and the bravery with which he faced it. On that particular day in May, I found myself repeating a phrase that was a mutual favorite of Mikey’s and mine: “Just keep swimming; just keep swimming.”

What day stands out as the best?

That’s a tough one. I would say my best day has to be when I hiked roughly 48 miles in northern Oregon. Not only do I adore the scenery in this region, but this particular day epitomized the state of flow you can fall into while hiking – where the sense of time slips away as your focus is sharpened by the challenge at hand. My hiking friends and I refer to it as mental buzz, but it can also be experienced in other sports, studying, or working in the lab.

The day began at Olallie Lake, looking across at the magnificent Mount Jefferson. I had initially planned to wake up before dawn, but one of the challenges of hiking alone is the lack of accountability to a partner. Of course, I slept through my alarm that morning and got off to a late start. The projected total elevation gain for the day was a manageable 6,000 feet, and I was excited to test the mettle of my legs, which were in tiptop shape after three months of walking.

The landscape that day was quintessential Oregon – dense green forest, trickling creeks, and cerulean alpine lakes, with intermittent views of the magnificent volcanic mountains. For the first eight hours, I maintained a brisk 3½-mph clip, walking without a break until 2:30 p.m. The grade of the trail was kind, but it still was a shock when my GPS device read 29 miles already for the day.

After chatting with some local day hikers – which was a treat for me at this point since I had been hiking mostly alone since the Sierra – I was off and pushing to make it to Mount Hood’s Timberline Lodge. As the day carried on and the sun fell below the horizon, the pine forest finally gave way to sandy slopes and numbing winds at the base of Mount Hood. Two steps forward were seemingly always followed by one step back.

Finally, well after losing feeling in my hands and feet, the brilliant spire adorning the brick facade of the Civilian Conservation Corps-era lodge came into view, and I trudged directly into the lodge restaurant for a meal, smelly hiker gear and all. I can still remember the first warm bites. 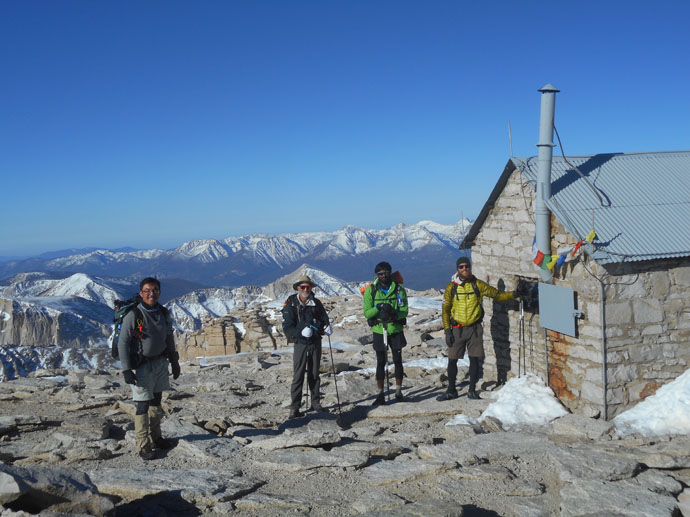 Eric stands on top of Mt. Whitney with a group of hiking companions.

Looking back, was it worth it?

Without a doubt. Hike 4 Pennies generated an immense, and humbling, amount of support. Most importantly, kids with incurable diffuse intrinsic pontine glioma (DIPG) will benefit from a new clinical trial paid for in part with money raised through the hike.

The lessons of the trail will forever guide my path in medicine and beyond. Much of my time alone was spent thinking about life and what makes it meaningful. Ultimately, I arrived at the conclusion that a fulfilling life for me would include treating pediatric brain tumor patients and helping to find cures for cancers that currently have none, such as DIPG.

That has led me to my current plan of becoming a pediatric neurosurgeon.

Back to main story 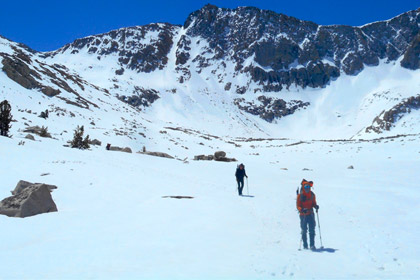