One of the most challenging complications of kidney cancer is tumor thrombus, which impacts 15% of patients. It occurs when the tumor grows beyond the kidney into the body’s largest vein, sometimes extending all the way into the heart.

Surgery is the only treatment. But as a highly complex and challenging procedure, surgery comes with significant risk. Further, half of patients who survive go on to develop metastatic disease.

A team from the Kidney Cancer Program (KCP) at UT Southwestern’s Harold C. Simmons Comprehensive Cancer Center set out to change that. UTSW researchers pioneered the use of stereotactic ablative radiation (SAbR), reporting the first case in the literature in 2015. “This involves deploying highly targeted radiation to the tumor inside the vein,” explained Raquibul Hannan, M.D., Ph.D., Associate Professor of Radiation Oncology and Immunology and co-leader of the KCP. The results were quite promising, and other institutions started to incorporate SAbR for tumor thrombi, in particular for inoperable cases. The team has also embarked on a prospective clinical trial to more rigorously assess the safety and potential of SAbR for tumor thrombus.

“There have been no improvements in outcomes for these patients in the past 50 years. This new combination of radiation with surgery could offer new hope.” 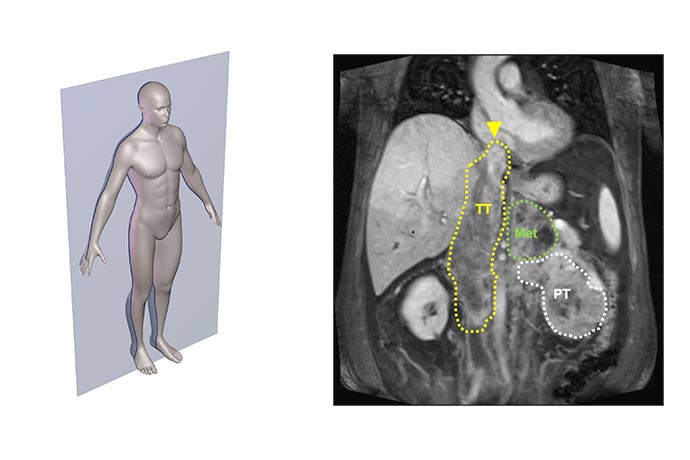 “When kidney cancer expands into the venous system and reaches the heart, it becomes quite challenging to treat,” said Vitaly Margulis, M.D., Professor of Urology. “Surgery requires not only opening the abdomen but often the chest as well and placing patients on cardiopulmonary bypass circulation.”

A tough cancer to beat

Kidney cancer is the No. 8 cancer in the United States. Each year, more than 75,000 cases are diagnosed, with nearly 14,000 deaths. Many cases are caught early, but in about 40% of cases, kidney cancer has invaded or spread at the time of diagnosis.

The KCP is one of two programs in the country developing new treatment strategies recognized by a Specialized Program of Research Excellence (SPORE) award from the National Cancer Institute.

“The first thing to do was to establish that SAbR was safe,” said Robert Timmerman, M.D., Professor of Radiation Oncology and Neurosurgery and a pioneer of SAbR for many cancers.

Involving half a dozen patients, the initial stage of the clinical trial established that SAbR didn’t increase complication rates. Each patient received five SAbR treatments to the tumor extension in the vein prior to surgery. Not one patient had serious complications, and at a median follow-up of two years, all patients were alive.

“There have been no improvements in outcomes for these patients in the past 50 years,” said Dr. Margulis. “This new combination of radiation with surgery could offer new hope.”

By irradiating the tumor inside the vein, SAbR has the potential to reduce metastases from fragments that break off during surgery, Dr. Hannan added.

KCP investigators weren’t content with just exploring new treatments, however. They also wanted to unravel its biology. Because of its unique ability to invade large veins, tumor thrombus can easily lead to metastatic disease. Yet, it doesn’t always metastasize. Recent findings published in Nature Communications from a decadelong prospective study examined the mechanisms that drive tumor thrombus invasion, providing new insights on how the disease spreads.

Led by Srinivas Malladi, Ph.D., Assistant Professor of Pathology, researchers assembled a cohort of 83 ethnically diverse patients diagnosed with tumor thrombus, of whom 41 developed metastatic disease. To dissect the factors contributing to invasion, they performed next-generation sequencing from different areas of the tumor and thrombus, including the thrombus-leading edge. Results showed that invasion involves the transient activation of a gene program that enables cancer cells to survive within blood vessels. Unexpectedly, this was not always accomplished by the most aggressive cells within the tumor.

“We found that less aggressive cancer cells could invade and travel along the vein,” said Dr. Malladi. “These data explain why not all tumors that invade go on to metastasize. While some cells may have the ability to invade, they haven’t yet acquired the ability to survive in the bloodstream or thrive in other organs.”

According to Payal Kapur, M.D., Professor of Pathology and Urology and co-leader of the KCP, more attention should be paid to grading tumor extensions, as they may give patients a more accurate assessment of their likelihood to develop metastases. “If validated, this could change clinical practice,” Dr. Kapur added.

Dr. Malladi hopes these findings will one day help patients. “By defining determinants of invasion and metastatic competence, we might be able to prevent tumor cells from invading in the first place and from initiating metastasis,” he said.

“Going from the biology to new treatment paradigms, the KCP has developed one of the most advanced programs for tumor thrombus patients globally,” said James Brugarolas, M.D., Ph.D., Director of the Kidney Cancer Program. “This was only possible by assembling a team of experts across different disciplines.”