Legg-Calvé-Perthes disease, also known as juvenile osteonecrosis of the femoral head, causes debilitating osteoarthritis in half of the children it affects. Intervention aims to help the bone heal, but current treatments are inadequate in this regard. Several years ago, UT Southwestern orthopedic surgeon Harry Kim, M.D., discovered that the microenvironment of the necrotic femoral head contains pro-inflammatory molecules that hinder bone regeneration. With the aid of a R01 grant from the National Institutes of Health and a large animal model of the disease, Dr. Kim and his team will develop and test minimally invasive tissue-engineering methods to transform the inflammatory environment into a regenerative one. 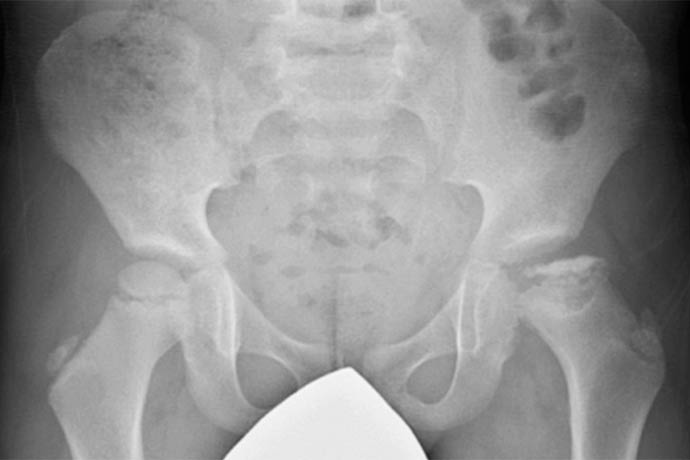 X-ray from a patient with Legg-Calvé-Perthes disease

Legg-Calvé-Perthes is initiated by disruption of blood flow to the femoral head, leading to extensive cell death, the accumulation of necrotic cellular debris, and the release of damage-associated molecular patterns (DAMPs). It affects children ages 2 to 15, most commonly those 4 to 8, causing hip pain and mobility issues in about 1 in 740 boys and 1 in 3,500 girls. The cause of the disease is unknown.

“Some Perthes patients do well without much treatment – activity and weight-bearing restrictions are sufficient for good outcomes,” said Dr. Kim, Professor of Orthopaedic Surgery at UT Southwestern, who has led clinical and basic research on the condition for more than 20 years. Dr. Kim is also Director of the Center for Excellence in Hip at Scottish Rite for Children in Dallas. “For others, they need a femoral or pelvic osteotomy to prevent the collapse of the femoral head,” he said. “Even with surgery, many of these patients develop osteoarthritis. We hope to find a better solution for them.”

On July 1, 2021, the National Institute of Arthritis and Musculoskeletal and Skin Diseases (NIAMS) awarded Dr. Kim and his research team $2.96 million over five years to test a potential clinical solution in an animal model. His project seeks to break the disease’s vicious cycle of chronic inflammation in which macrophages cause further tissue damage and fibrosis in response to the secreted inflammatory molecules and the necrotic debris in the environment. Dr. Kim and his team will begin by simply washing away the necrotic material in the femoral head using a minimally invasive technique developed and patented at Scottish Rite for Children. Next, they will test the effects of the application of bone morphogenetic protein-2 (BMP-2) in a controlled-release hydrogel to the diseased site. Finally, they will test the effect of the application of the anti-inflammatory cytokine interleukin-4 to the site via hydrogel. After each intervention, the team will test the resident macrophages and bone repair responses to see if they have successfully created a regenerative environment in which the bone can heal.