“Understanding the interactions between our resident bacteria and host immunity could have untold consequences for human health.”

Virtually all life on Earth follows cycles tied to sunrise and sunset that allow organisms to anticipate and prepare for environmental changes. Disrupting these circadian rhythms can have serious health consequences; for example, chronic sleep disruption is related to intestinal infection in humans. But why this occurs has been unclear.

Work over the last five years led by John Brooks II, Ph.D., a former postdoctoral fellow in the lab of Lora Hooper, Ph.D., suggests that the answer at least partly lies in a unique collaboration between the human innate immune system and the gut microbiome. This research recently earned Dr. Brooks the Brown-Goldstein Award, given by the UT Southwestern Graduate School of Biomedical Sciences to honor the contributions of Nobel Laureates Michael Brown, M.D., and Joseph Goldstein, M.D., to training future scientists.

Accompanied by a $4,000 prize and opportunity to present a University Lecture, the award represents the highest recognition the Graduate School bestows on postdoctoral trainees.

“I am extremely proud of John for receiving this well-deserved recognition,” said Dr. Hooper. “John is an absolutely stellar scientist – creative, persistent, and completely fearless. He has opened up a fascinating new window on how the microbiome and the circadian clock come together to regulate immunity. I was lucky to recruit him as a postdoc to my lab, and I’m sure he will do great things as a faculty member at Princeton University.”

Dr. Brooks, today an Assistant Professor of Molecular Biology at Princeton, got his start in microbial research as an undergrad at the University of Michigan. He always had a strong interest in science. With science camps and fairs a family affair, his parents encouraged him to apply to the University of Michigan’s Health Sciences Scholars Program, a pre-professional learning community that introduces freshmen to key issues and the breadth of careers in the health care field by bringing together students and faculty from a broad range of backgrounds.

Originally intending to pursue medical school, Dr. Brooks began working in the University of Michigan lab of Janine Maddock, Ph.D., to gain some research experience. There, he not only made contributions to understanding how bacteria localize specific proteins within their cells, but also discovered a love of research that overtook his original desire to study medicine.

After earning a Bachelor of Science degree, Dr. Brooks began graduate school at Northwestern University. Working in the lab of Mark Mandel, Ph.D., he used the bacterial genetics techniques he’d learned at the University of Michigan to study the relationship between the Hawaiian bobtail squid and Vibrio fischeri, a bioluminescent bacterium that uniquely colonizes the squid’s light-producing organ within hours of hatching despite competition from thousands of other bacterial species in its environment.

Following five years in the Mandel lab, Dr. Brooks searched for a postdoctoral mentor who could help him combine his knowledge of bacterial genetics with a growing curiosity about how resident microbes affect their hosts. He found the perfect match in Dr. Hooper, Chair of Immunology, a Howard Hughes Medical Institute (HHMI) Investigator, and a Professor of Microbiology with an additional appointment in the Center for Genetics of Host Defense.

“Lora provided the space and guidance necessary for me to grow and become successful,” he said. “She had this incredible ability to pair my skill sets with an interesting question, so I could really soar.”

After encouraging Dr. Brooks to apply for the HHMI’s Hanna H. Gray Fellowship, which he received the year after he started working in Dr. Hooper’s lab, the pair sought to understand the role of gut microbes in innate immunity. Working in mouse models, the researchers suspected that antibacterial immunity might change in the intestines on a circadian cycle. To investigate, the researchers looked for rhythms in the genetic activation of natural antimicrobial agents produced in the gut of mice to fight foodborne illness.

They found that an antimicrobial molecule in the intestines called REG3G cycled from being more abundant at night – when mice are awake and active – to less abundant during the day – when they’re sleep. Further study tied this cycling to segmented filamentous bacteria – microbes typically present in the intestines of rodents and primates – that have an ability to attach to the intestinal lining and change their hosts’ gene activity. When these bacteria latched onto intestinal cells, REG3G production ramped up.

This cycling had significant consequences for the ability of mice to fight off infection. When the researchers infected mice with disease-causing bacteria, the animals had higher bacterial numbers and rates of death when exposed at sunset vs. sunrise. Mice unable to make antimicrobial proteins, including REG3G, had similarly high rates of bacterial burden and death regardless of when they were infected.

If research shows this phenomenon also occurs in humans, Dr. Brooks said, scientists may eventually be able to capitalize on it by either timing the administration of synthetic antibiotics for intestinal infections and oral vaccines, or by finding new ways to avoid intestinal infections altogether. At Princeton, Dr. Brooks continues to study how microbes impact innate immunity in the gut.

“Understanding the interactions between our resident bacteria and host immunity,” he said, “could have untold consequences for human health.”

Dr. Hooper holds the Jonathan W. Uhr, M.D. Distinguished Chair in Immunology and is a Nancy Cain and Jeffrey A. Marcus Scholar in Medical Research, in Honor of Dr. Bill S. Vowell 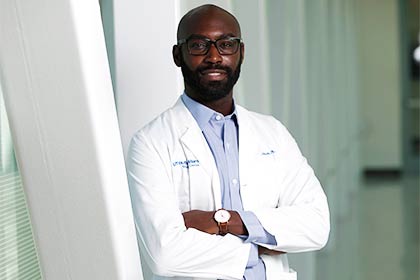