Fellowships help physicians hone their skills in specific specialties or subspecialties. For pediatric cardiology, fellowships typically last three years, with 12 months dedicated to research. Because fellowships are dominated by clinical work, making significant advances in science during that year of research can be difficult, if not impossible, explained Dr. Spurgin, who’s currently in the second year of his fellowship.

“Clinical work is so demanding that being able to train as a scientist usually takes a back seat,” he said. “Consequently, becoming a physician-scientist who is proficient in both the lab and the clinic is a tough path in which few succeed.”

Dr. Spurgin said he’s hoping to beat the odds with the support from PSDP. Founded in the mid-1980s, the program provides mentorship and financial support to aspiring physician-scientists in pediatric fellowships. Program fellows are nominated by their department chairs, with only seven accepted each year from across the country. Six other fellows from UTSW have been part of this program over the past three decades.

The grant includes support for two years of dedicated research on an ongoing project. His study seeks to discover why children born with a single functioning ventricle develop pulmonary arteriovenous malformations (PAVMs) – abnormal tangles of arteries and veins in the lungs that disrupt normal blood flow and oxygen circulation.

Most people have two ventricles in their hearts – large chambers that first receive and then pump out blood. The right ventricle pumps blood toward the lungs to pick up oxygen, and the left ventricle pumps that oxygenated blood into the body’s systemic circulation. However, a small fraction of babies are born with just a single ventricle that must do the work of two, inevitably leading to heart failure. 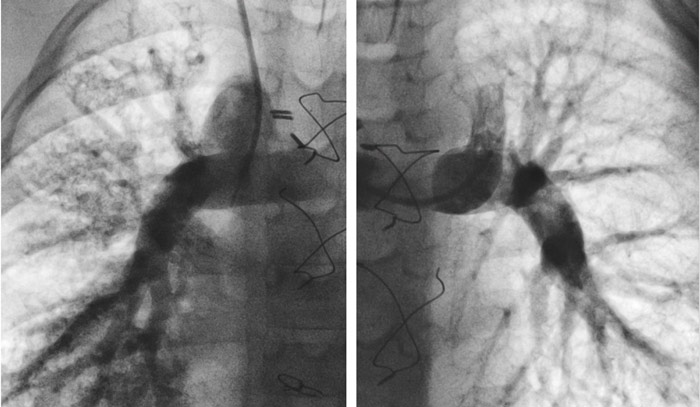 Over the past few decades, surgeons have established a series of three procedures performed between the first week of life and 4 to 6 years of age that is considered the gold standard for treating children born with a single ventricle. The gradual pace of these operations gives time for the lungs to adjust as they passively receive deoxygenated blood from circulation instead of requiring work from a second ventricle. After the middle operation – in which blood coming from the liver bypasses the lungs and goes directly to the systemic circulation – most patients develop PAVMs to some degree, explained Dr. Spurgin.

Although these PAVMs reverse after the third surgery, they can significantly decrease the amount of blood oxygen available to these children, leading to serious consequences that often hasten the pace at which they must receive the third and final surgery.

Researchers have long hypothesized that these PAVMs form when the lungs no longer receive some critical protective protein or small molecule factor made in the liver, Dr. Spurgin said. However, the identity of this mysterious molecule has been unknown.

With the PSDP grant, Dr. Spurgin aims to identify this substance. One part of his work involves animal models that he and his colleagues will genetically manipulate, shutting down genes they suspect may be involved in producing this factor. Other parts of the study will involve sampling blood from different areas of circulation in patients with single ventricles – including those that supply or exit the lungs, liver, and heart – looking for key differences in its molecular makeup.

If his team is successful at identifying this factor, he said, it could have implications for adult medicine too. Patients with liver damage from hepatitis B or C, liver cancer, and alcohol-related cirrhosis also can develop PAVMs, likely from a lack of the same substance.

“It’s scary, but exciting,” Dr. Spurgin said of the research, the first major project he has led. “Being able to really focus on this research could lead to important discoveries and give me valuable experience as I begin my physician-scientist career.”