Many of us lean heavily on the rhythms of daily life: waking, working, eating, and sleeping at roughly the same times every 24 hours. This pattern of biological processes – known as circadian rhythms – can have a substantial impact on the health of humans and other species.

For the past five years, postdoctoral researcher Dr. Filipa Rijo-Ferreira has been immersed in this intriguing line of investigation, focusing on the circadian clocks of the human parasites Trypanosoma brucei and Plasmodium. For her efforts, she has received the Brown-Goldstein Award for Excellence in Postdoctoral Research, the highest honor bestowed by the UT Southwestern Graduate School of Biomedical Sciences. The award honors the contributions of Nobel Laureates Drs. Michael Brown and Joseph Goldstein to training future scientists. 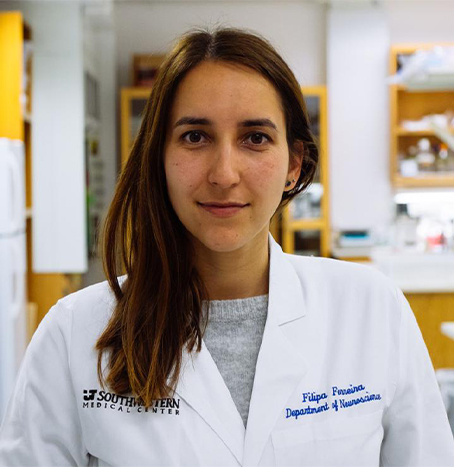 Dr. Rijo-Ferreira began working in the laboratory of world-renowned circadian rhythm researcher Dr. Joseph Takahashi as a doctoral student – not at UT Southwestern, but through a unique graduate program in biology at the University of Porto in Portugal. The program provides students with a stipend to study at a laboratory anywhere in the world.

Before that, she had worked as a technician in a laboratory that studies how T. brucei, the sleeping sickness parasite, infects its victims – including the role of its circadian rhythms. She reached out to Dr. Takahashi, Chair and Professor of Neuroscience at UT Southwestern, whose three-decade-long career has focused on circadian rhythms in mammals.

“It’s not just about aligning interests,” Dr. Rijo-Ferreira said. “Joe is a very curious person who’s willing to explore other directions of research, but he’s also extremely generous, providing mentorship and the space for me to explore my own interests. I really hit the bull’s-eye when I joined his lab.”

Working with Dr. Takahashi and her University of Porto mentor Dr. Luisa Figueiredo, Dr. Rijo-Ferreira showed that T. brucei’s metabolism is controlled by circadian rhythms. The researchers learned that sleeping sickness is a circadian disorder, with the parasite’s clock impacting the host’s circadian rhythm.

After Dr. Rijo-Ferreira finished her doctoral program in 2016, she stayed in Dr. Takahashi’s lab as a postdoctoral fellow, turning her attention to a different fatal parasite: Plasmodium, a group of single-celled eukaryotes that cause malaria. One of malaria’s key symptoms is rhythmic fevers that typically come and go in variants of 24 hours, such as every day or every two days. Drs. Rijo-Ferreira and Takahashi suspected that the parasite had its own rhythmicity, just like T. brucei.

The researchers confirmed this hypothesis using mice with altered circadian rhythms. Some mouse lines bred to study circadian rhythms have cycles that are longer or shorter than 24 hours. When the researchers infected animals with a 26-hour cycle with Plasmodium, they saw that the parasites’ own patterns of gene activity did not adjust right away – although they seemed to be taking cues from the host, Plasmodium had their own independent rhythm. They then infected mice with no circadian rhythms and found about 60 percent of Plasmodium’s genes continued to cycle every 24 hours, suggesting that these parasites have an inherent clock that functions independently of the host’s patterns.

Understanding parasites’ clocks could lead to more effective treatments for humans, Dr. Rijo-Ferreira said. In fact, her research with Dr. Takahashi showed that T. brucei can be effectively killed in culture with 2.5 times less suramin – a medication frequently used to treat sleeping sickness – when delivered at a certain time of day. Because treatment for sleeping sickness can be extremely toxic, being able to deliver less medicine with the same efficacy could save more lives.

Dr. Rijo-Ferreira noted that although all life on Earth appears to have circadian cycles, these cycles can differ significantly – for example, bacteria circadian clocks use different molecular mechanisms than human ones. Capitalizing on this effect could lead to drugs that effectively target parasites while sparing treatment side effects.

The Brown-Goldstein Award includes a monetary prize as well as the opportunity to present a University Lecture. Dr. Rijo-Ferreira’s virtual seminar, “Circadian Rhythms in Parasitic Diseases: An Underlying Clock of Malaria Parasites,” is at 4 p.m. on Thursday, April 29.