Anyone who took high school biology probably remembers drawings of the human cell, with its round nucleus toward the center and bean-shaped mitochondria nearby. What they probably don’t recall – because scientists didn’t know much about this until the last decade – is that the tiny human cell, about the width of a human hair, also contains numerous smaller structures that can almost magically move from one place to another to perform a variety of cellular functions.

Dr. Michael Rosen, Chair of the Department of Biophysics, will share his research about these newly described cellular structures with the campus community in an upcoming President’s Lecture Series. Titled “Like Oil From Water: How the Cell Interior is Organized by Phase Separation,” the virtual event will be presented at 4 p.m. Thursday, March 11. Register below. 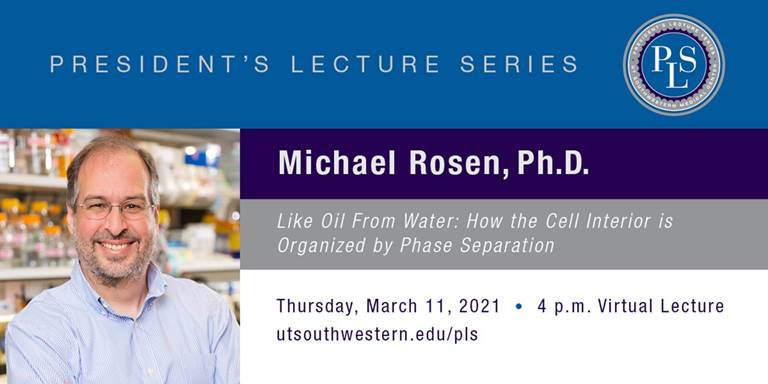 Dr. Rosen’s lab was one of the earliest to study how these membraneless structures – called biomolecular condensates – form by separating into a distinct area, or phase, within the cellular material around them. He became UT Southwestern’s first Allen Distinguished Investigator in 2018 when he was awarded $1.5 million over three years to fund research into how these tiny chemical-filled droplets behave as they separate from other fluids within the cell.

In 2009, a group of German researchers reported that a structure in the worm embryos they were studying could dissolve and then re-form on the other side of the cell.

This structure is now understood to be a biomolecular condensate. Dr. Rosen compares it with the droplets one might see after mixing oil and vinegar to create a salad dressing. Inside the cell, the condensates – just like droplets of oil – separate into their own phase from the surrounding materials. The molecules that form them are held together by multiple sticky elements and flexible tethers, he said.

In plant cells, a biomolecular condensate provides a safe space where enzymes can interact with carbon dioxide to create needed chemicals without coming into contact with oxygen, which would produce wasteful side-products, Dr. Rosen said, citing one example of how cells use these free-floating compartments.

In humans, if DNA inside the nucleus gets damaged, a biomolecular condensate forms where it’s needed – then disappears once the repair is done, he said. In yet another example, discovered by Dr. Zhijian “James” Chen, Professor of Molecular Biology and in the Center for the Genetics of Host Defense, a biomolecular condensate plays an important role in the innate immune response to invading pathogens.

Using modern fluorescence microscopes, it is now possible to see these biomolecular condensates form, then go away, Dr. Rosen said.

Changes in biomolecular condensates have been implicated in human diseases – particularly in neurodegenerative diseases such as amyotrophic lateral sclerosis (ALS), commonly known as Lou Gehrig’s disease, and frontal temporal lobe dementia. It is thought that genetic mutations cause the condensates to become more solid, killing the cells they are in, he said.

A member of the prestigious National Academy of Sciences, Dr. Rosen has co-founded a new biotech startup called Faze Medicines in collaboration with UT Southwestern to research biomolecular condensates to better understand and eventually treat ALS and other diseases.

Dr. Rosen is also a Professor in the Cecil H. and Ida Green Comprehensive Center for Molecular, Computational, and Systems Biology.