UT Southwestern has expanded its Movement Disorders Clinic in the Peter O’Donnell Jr. Brain Institute to become a hub for research and care for patients with cerebellar ataxia, a disorder that causes uncoordinated movements and imbalance due to damage in a part of the brain called the cerebellum.

“Our goal is to understand the major symptoms of the disease, how they localize to specific parts of the brain, and how they progress over time,” said Vikram Shakkottai, M.D., Ph.D., Associate Professor and Vice Chair for Basic Research in the Department of Neurology. “We are then using that knowledge in mouse models to discover the underlying physiology and develop novel therapies.” 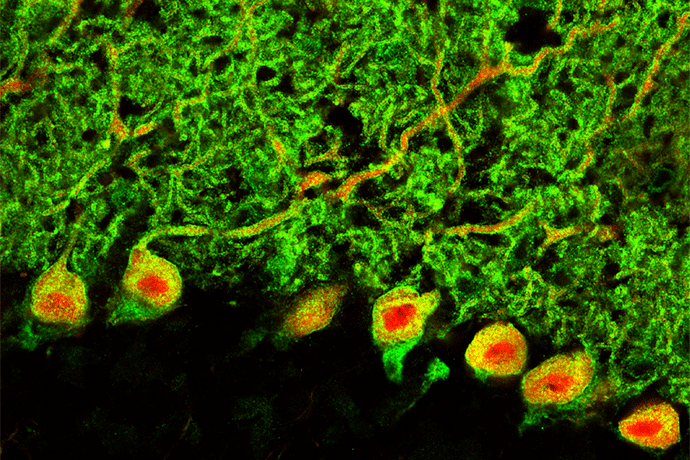 Dr. Shakkottai, who joined UT Southwestern in March, is leading research to determine whether alterations in neuronal physiology contribute to motor dysfunction. In addition to collaborating in the diagnosis of those with balance difficulties, Dr. Shakkottai will add UT Southwestern to a multi-institutional, longitudinal, observational study of participants with inherited ataxia that he previously led at the University of Michigan. He is also continuing his basic research on mouse models of the disease, also known as spinocerebellar ataxia (SCA).

Although the damage that causes SCA can come from several sources, Dr. Shakkottai focuses on inherited forms because the rigor of the models is better. “Sporadic and immune ataxias are hard to recreate in the lab, but hopefully what we learn from the genetic forms will apply more broadly,” he said, noting that SCA affects about 150,000 people in the U.S.

What is known so far is that the four most common types of the disease (SCA1, 2, 3, and 6) are autosomal dominant disorders caused by an extra number of glutamine codon repeats (CAGn) in genes that code for ion channels in neurons. These polyglutamine mutations dysregulate transcription, and work in Dr. Shakkottai’s laboratory has suggested that the transcriptional dysregulation in these disorders affects the number of ion channels in neurons, which prevents them from generating action potentials. Purkinje cells, which play the biggest role in the cerebellum in integrating motor signals that are ultimately directed to the motor cortex, are particularly affected. “In autopsy samples, Purkinje cells are missing,” said Dr. Shakkottai, “but in mouse models we can see that they become dysfunctional before they die. The loss of ion channels seems to make them vulnerable to death.”

There are currently no treatments for SCA, but Dr. Shakkottai is hopeful that a drug can be developed that would alleviate symptoms and slow disease progression.

“Ion channels are a tractable target for new therapies,” he said. “They’re on the cell membrane so they’re easily accessible to drugs (once they cross the blood-brain barrier), and the majority of FDA-approved agents for neurological disorders target ion channels, so it’s a well-established path for drug development.” His long-term goal is to change SCA from a debilitating neurodegenerative disease into a chronic disorder that can be managed, more like hypertension.