In March, Erica Ogwumike, then a senior at Rice University, had an important decision to make about her future.

Erica, who was a star basketball player and named Conference USA Player of the Year twice, had been accepted at eight medical schools. UT Southwestern was one of her top choices – not only because of its strong academic reputation, but because the admissions committee made her feel like her background as a student athlete was an asset, she said.

“I took that into account because it shows the diversity that the school wants and I felt very welcomed because of it,” she said.

“After everything that’s happened this year, I have become super passionate about wanting to become credentialed in many areas and own a seat at the table at organizations that have traditionally left out people who look like me. I also want to help amplify the voices of people who have made it their life’s mission to correct racial disparities in medicine and elsewhere.”

Then, in April, her career planning process grew more complicated with some unexpected but exciting news. She was drafted into the WNBA by the New York Liberty, before being traded to the Minnesota Lynx the same day.

“I was planning my life as if basketball was going to be done,” she said. “I was applying to medical school and interviewing all throughout my basketball season. So when I got drafted in April, it was surprising.”

Erica was surrounded by her parents and three older sisters as her name was called on TV. The draft announcement was made all the more special because her two oldest sisters, Nneka and Chiney Ogwumike, are WNBA players for the Los Angeles Sparks.

As the initial excitement settled, Erica now had a unique decision to make – choosing between medical school, which she had been working toward since her sophomore year of college, or joining her sisters as a professional basketball player.

She hadn’t committed to any medical school yet, so she had to break the draft news to the admissions committees at the schools she was considering. She said UTSW made doing so easy.

“UT Southwestern was so supportive. They were the first school to congratulate me on getting into the WNBA, encouraged me to consider my options, and they were like, ‘We’re going to work it out.’ So I knew this was the place for me,” she said.

Owning a seat at the table

While it was always her intention to go to medical school, after being drafted Erica said she still wanted to know if she could make the Lynx’s roster. A typical WNBA season runs from late spring to late summer, so potentially she could have competed for one season before beginning her first year of medical school. But the COVID-19 pandemic delayed training camp and the 2020 season. Essentially, that made the decision of opting out of the WNBA for her.

Now as she trains for a much different professional future, Erica said the years spent training as a basketball player helped affirm her choice. In college, she shadowed doctors at Texas Medical Center and discovered some parallels between sports and medicine.

“I think I just love the multidimensionality of medicine. When I shadowed doctors, I saw how they are involved in policy, education, correcting health disparities, and improving social issues – all these things I want to do. And they all have to work together and with other professionals as a team and have to communicate well. I was like, ‘Wow, this is one big basketball team. I’ve been doing this my whole life.’”

Growing up in Cypress, near Houston, Erica started playing basketball as a preteen alongside her third oldest sister, Olivia, who is now working toward her MBA at Rice. The two youngest Ogwumike daughters were first influenced by big sisters Nneka and Chiney, who started the family tradition in the sport. 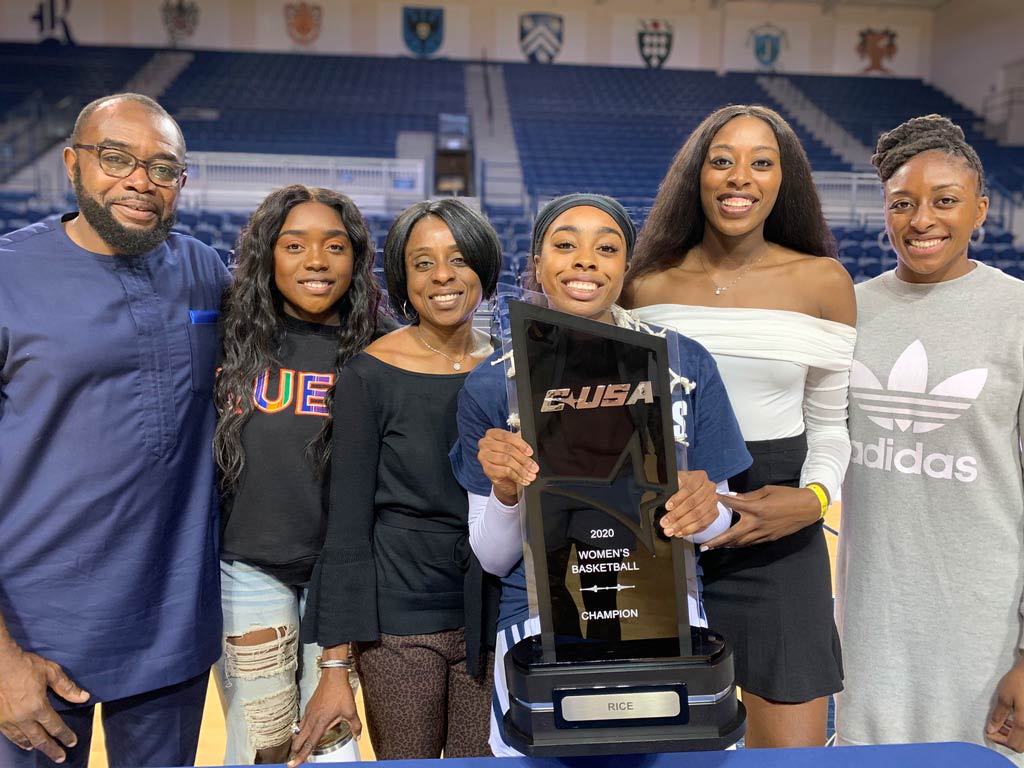 Once in high school, Erica said it became important for her to be good at the sport so she could earn a college scholarship as her siblings had done. Nneka and Chiney were teammates at Stanford University, while Erica and Olivia were teammates at Rice.

“Our love of basketball came from us doing it as sisters. I think we felt like our best selves doing it, and we’ve been able to use it as a platform to become more versatile human beings,” Erica said.

Now as a medical student, Erica continues to use her sisters as role models. Nneka and Chiney serve as president and vice president of the WNBA players’ union, and Erica said she admires how they use the platform to address issues surrounding racial injustice, which the players of the WNBA have been collectively vocal about and have dedicated this season to social justice initiatives. As a Black woman and aspiring physician, Erica hopes to use her career to improve racial disparities in health care.

Erica, who’s considering dermatology or sports medicine as a specialty, also wants to earn her MBA through UTSW’s M.D./MBA program, a joint effort with UT Dallas’ Naveen Jindal School of Management. While at Rice, she interned in the President’s office and developed an interest in executive leadership as well.

“I am hoping that an MBA will help me figure out how to incorporate those skills as a doctor,” she said. “After everything that’s happened this year, I have become super passionate about wanting to become credentialed in many areas and own a seat at the table at organizations that have traditionally left out people who look like me. I also want to help amplify the voices of people who have made it their life’s mission to correct racial disparities in medicine and elsewhere.”

Erica, a self-described extrovert, said she likes to keep busy. As an undergrad she triple-majored in health science, policy studies, and Spanish. Although she found a way to be successfully busy as an undergrad, she said in just a short time she has noticed the stark difference between college and medical school. “So far the toughest part has probably been learning that you can’t learn everything in a day. The volume of information is immense, and I think I’ve had to learn that you can only do so much in a day.”

Yet, she remains committed to finding a way to balance all her passions, including basketball. Erica has been invited to try out for the Nigerian national team, which will compete in the postponed 2021 Summer Olympics in Tokyo. While she was born in Texas, Erica is eligible to join the team since her parents are natives of Nigeria. 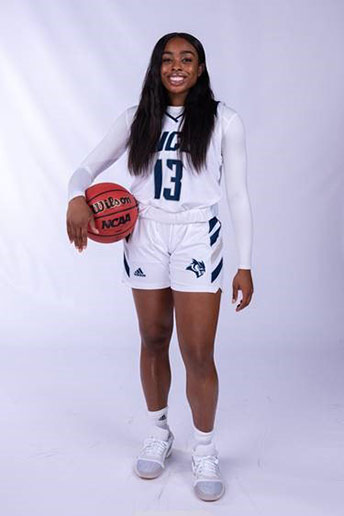 Erica is continuing her basketball training while in medical school and hopes to try out for the Nigerian national team with the goal to play in the 2021 Summer Olympics. Photo courtesy: Rice Athletics

Since starting medical school, she has continued 5 a.m. workouts and trains with a WNBA trainer up to twice a week.

“I’ve always had a dream to play for the Nigerian national team one day, so the timing of this opportunity worked out well with medical school, which remains my No. 1 priority,” she said. “It will be hard to balance both, but I intend to stay in shape and continue my workouts with the goal to compete next summer.”

Meanwhile as she continues her journey toward becoming a doctor, Erica said she hopes her experiences can provide inspiration to others who aspire to take on the challenge of medical school.

“If I am one small example to other athletes who don’t know if they can balance school and sports, women or kids who look like me, or maybe as someone who has entered medical school in an unconventional way, that would really be an accomplishment to me.”