For several days, restlessness overwhelmed UT Southwestern medical student Louise Atadja. Outside of the normal stresses of student life, she was anxious as protests broke out in dozens of cities across the nation, including Dallas, following the police-involved killing of George Floyd on May 25.

Ms. Atadja said she had been frustrated at her inability to participate in demonstrations related to Mr. Floyd’s death because she was heavily focused on preparing for the crucial Step 1 exam. But on June 5, just a week before her test, she halted her practice exam and rushed to McDermott Plaza to take part in the White Coats for Black Lives rally, joining more than 100 UT Southwestern faculty, trainees, students, and staff who knelt for 8 minutes and 46 seconds in tribute to Mr. Floyd. That’s the amount of time a Minneapolis police officer kept his knee on Mr. Floyd’s neck before he died.

“During the eight minutes of kneeling, one thing that I was thinking about was the fact that it was Breonna Taylor’s birthday,” Ms. Atadja said, referring to the black woman shot and killed by Louisville, Kentucky, police in March after they used a battering ram to enter her apartment and execute a no-knock search warrant.

“Focusing both on her death and George Floyd, along with the physical action of kneeling, made me think of the weight many African Americans carry on our backs. As my knee was hurting, it just intensified my frustration and desire for progress,” Ms. Atadja said. 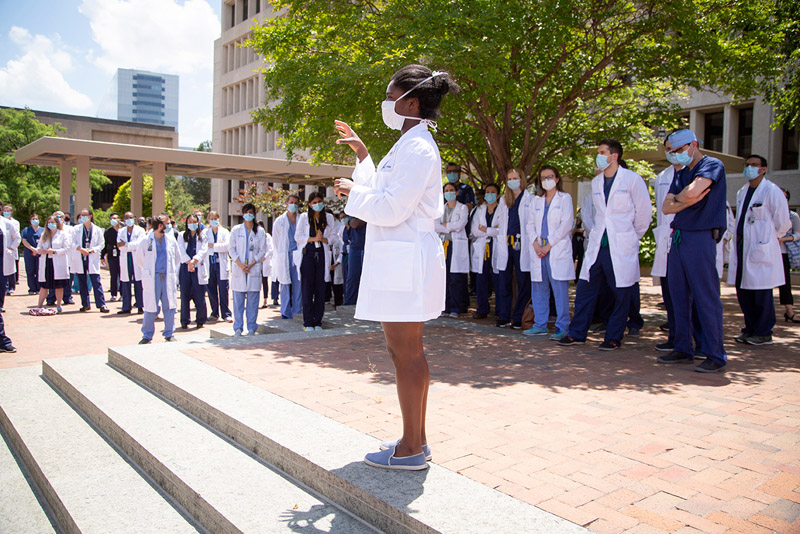 Medical student Louise Atadja gave an impromptu speech to attendees during the rally.

Speaking to the attendees, Dr. Nivet recalled the words of Dr. Martin Luther King Jr., who said that the arc of the moral universe is long, but it bends toward justice.

“But it takes a collective effort to bend that arc and we have to work on it together,” he said. “I am proud of all of us and all of the people around the country who are leveraging their voices.” 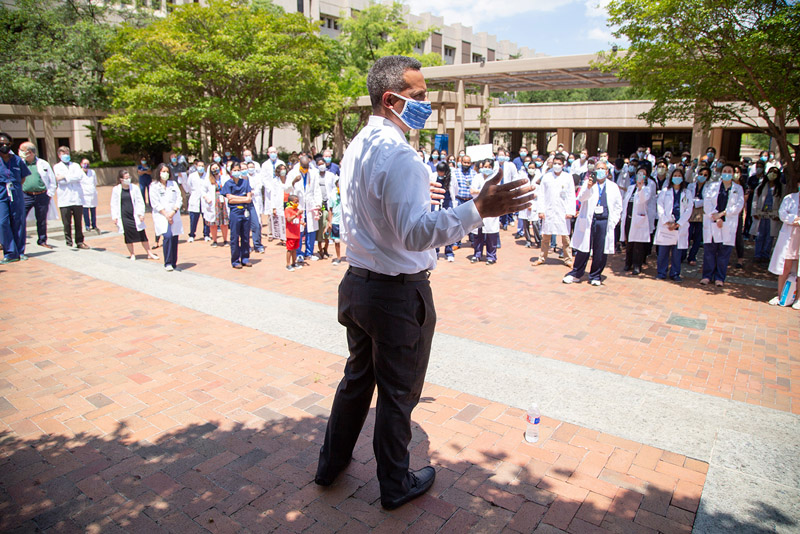 Ms. Atadja, who hadn’t arrived at the rally planning to speak, said her feet moved faster than her brain as she moved to address the crowd. She spoke about the isolation she feels because of racism, thanked the crowd for their support, and said she felt hopeful that improvements in racial health inequities could be made.

“Even though I wasn’t prepared, I just felt it important that as a black female medical student that I said something,” Ms. Atadja said.

“Because I have been indoors studying, I’ve felt frustrated that people around me have not been engaged in the movement. But the collective unity of that moment of seeing people in white coats from different backgrounds who were also kneeling was powerful,” she added.

Dr. Dale Okorodudu, Assistant Professor of Internal Medicine, works to increase the number of black doctors through his initiative Black Men in White Coats and was invited by organizers to address the rally. He encouraged his colleagues to push for change.

“As physicians, we have a powerful role and a strong voice in society where people listen to us because of our profession. So we should do the right thing to influence other people,” he said. 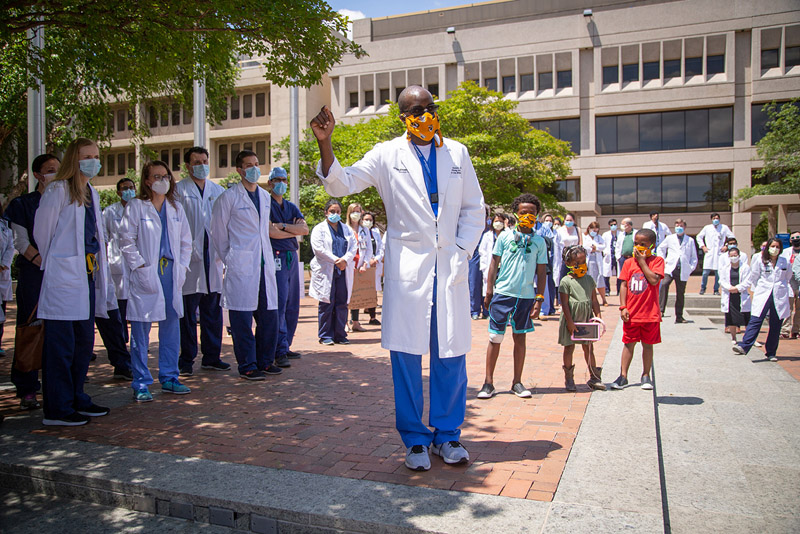 Dr. Dale Okorodudu, Assistant Professor of Internal Medicine, encouraged colleagues to use their influence as physicians to speak up about issues surrounding racial injustice.

Because health impacts every area of a person’s life, addressing inequalities in medical care is essential, Dr. Okorodudu said.

“My end goal is getting increased representation among physicians,” he said. “If you’re not familiar with the inequalities other people suffer or people don’t tell you about those things, you might be less inclined to identify them and act on them. So, I want to make sure that people and communities that suffer from health care inequalities have adequate representation in the medical field.”

Dr. Shreya Rao, a cardiology fellow who helped organize the rally, acknowledged that kneeling is only a symbolic show of solidarity. But she hopes physicians had some time to reflect about how they can better combat structural racism in health care that leads to disproportionate levels of chronic diseases such as diabetes, heart disease, and cancer in communities of color. 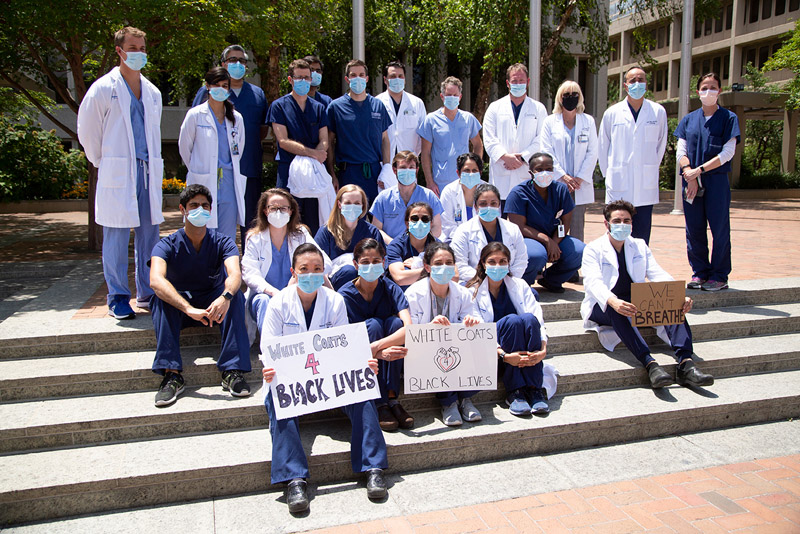 A group of cardiology fellows, who helped organize the rally at McDermott Plaza, posed with faculty mentors.

“That’s something I am trying to be more direct about, naming the manifestations of racism within our practice of health care,” she said. “We use a lot of euphemisms such as ‘disparities’ or ‘inequity,’ but these are really just examples of how racism operates against our patients.”

Many health care providers said there is a correlation among unjustified police brutality, systemic racism, and health care inequality that makes raising the issue at the Medical Center relevant. 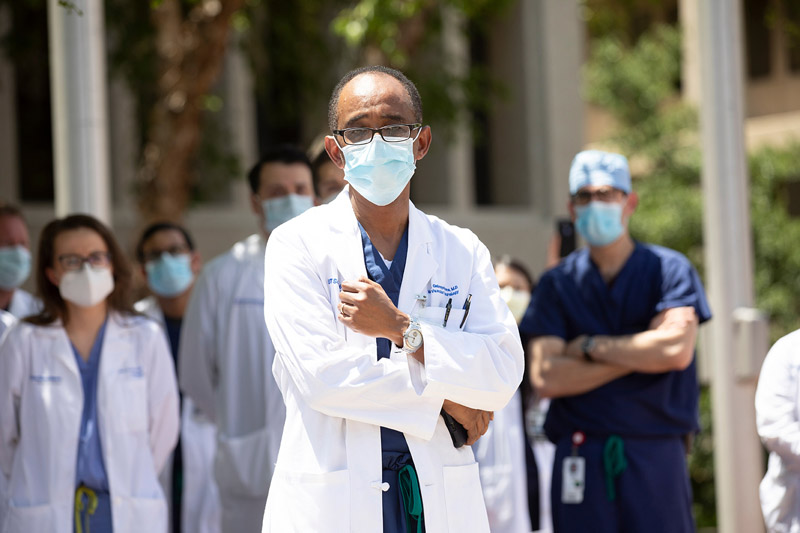 Dr. Mehari Gebreyohanns, Assistant Professor of Neurology and Neurotherapeutics, said addressing racial inequities in other areas of society is relevant at medical institutions because health care and social issues are connected.

“The medical community is intimately involved with health and social issues that affect people of color disproportionately,” said Dr. Mehari Gebreyohanns, Assistant Professor of Neurology and Neurotherapeutics, who also spoke at the rally. “Advocating for health equity, including mental health that is often indirectly dealt with in the criminal justice system, is the right thing for the long-term solution of having a healthy community everywhere in the country.”

Although rally attendees appreciated that the event allowed the community to come together and share in the somber moment, many said they want to see UTSW do more to eliminate racial bias and discrimination in health care. Dr. Podolsky said the Medical Center is committed to doing so. 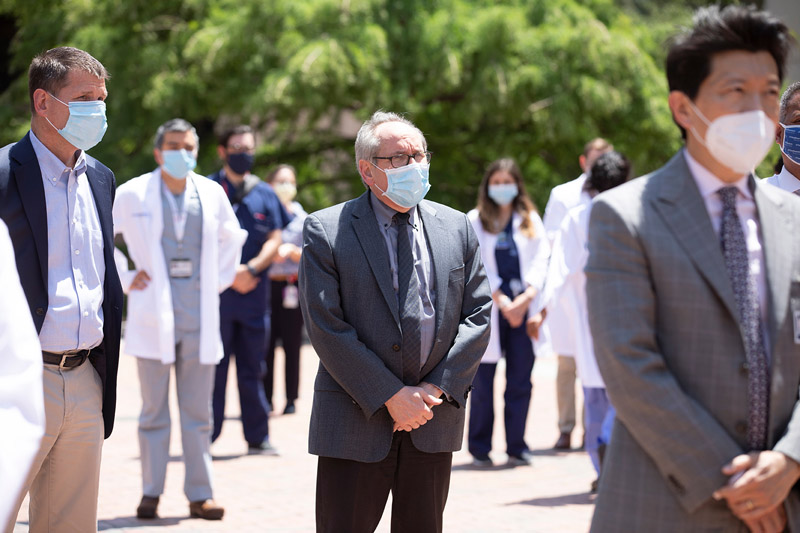 On June 10, during the President’s weekly briefing to the UTSW community that is typically focused on COVID-19 issues, Dr. Podolsky began by talking about “the need for us at UT Southwestern to confront the scourge of racism and inequality which continues to plague every institution in this country.”

“We cannot assume that we at UT Southwestern are immune from that and therefore are obligated to identify where it exists – even in its more insidious forms – and do everything that we can to address it,” Dr. Podolsky said.

The Medical Center is working with the President’s Council on Diversity and Inclusion to identify areas where the institution can improve and devise active measures to address racial inequality. 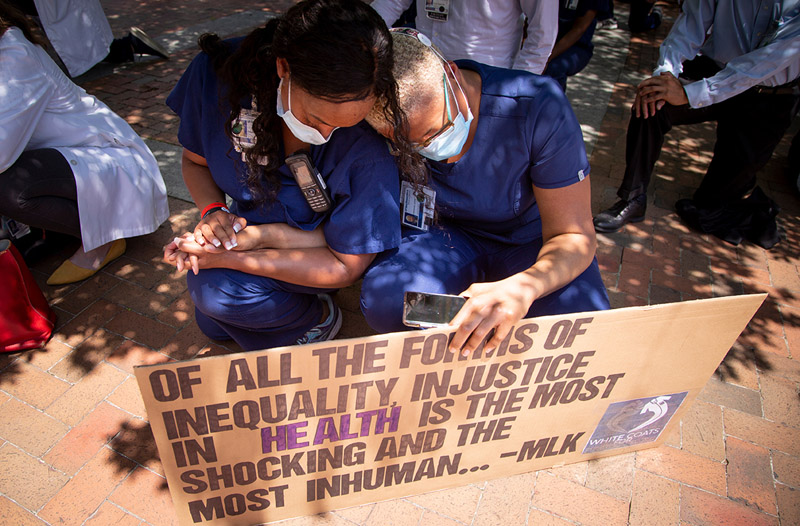 Registered Nurses Filoshia Barrow (left) and Adrianne Johnson comforted each other during the kneeling demonstration.

“I felt sadness, grief, anguish, pain, and peace in the moment being surrounded by those that acknowledge what it means to be oppressed, to be segregated, to be racially profiled – that’s what it felt like.”

“It was very, very emotional. It wasn’t just the pause, but every person that’s been oppressed that I know or whose name has appeared in the media was running through my mind. I felt pain during that quiet moment because I was thinking about the pain of their families.” 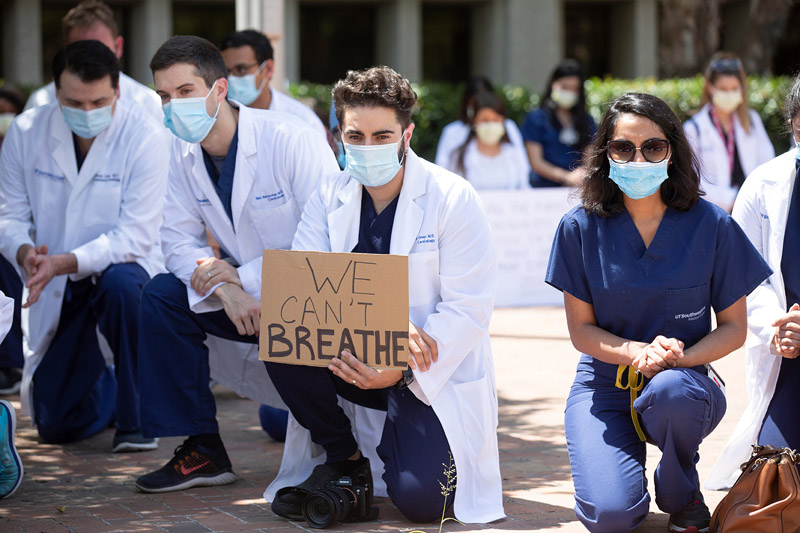 Cardiology fellow Dr. Wally Omar (center) said it's important for health care providers to understand how black patients are marginalized in order to understand how health disparities arise and to be better patient advocates.

“It was incredibly emotional. I kept putting myself in the position of George Floyd or the people who were watching him. We’re in the Texas heat in the middle of the day, so kneeling is obviously uncomfortable. So imagine someone kneeling on your neck for 8 minutes and 46 seconds.”

“While kneeling, I looked around and I saw colleagues and friends in tears. It showed me how important it is that we not just feel support for the protests and for the anti-racism movement in our hearts, but that we agree to stand with the black members of our community who are suffering and express our support out loud.”

Dr. Warner holds the Nancy and Jeremy Halbreich, Susan and Theodore Strauss Professorship in Cardiology, and the Jim and Norma Smith Distinguished Chair for Interventional Cardiology. 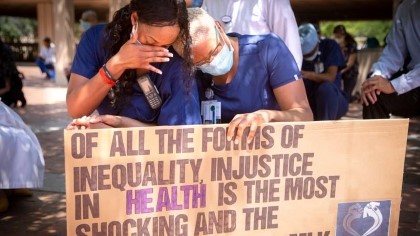 Letter from the President

Dr. Daniel K. Podolsky: This is a place where you belong