When Dr. Robin Jacoby touched down in Texas for the first time in July 2009, she never seriously considered it would become her home for the next decade. Or that she would culminate her 48-year career here. Especially after she stepped outside.

“It was 105 degrees at DFW Airport,” Dr. Jacoby recalled. “And my first thought was, ‘What is this oven I’m walking into?’”

But she had received a flattering invitation from Dr. Daniel K. Podolsky, with whom she had worked closely for almost four years at Partners HealthCare System, the umbrella organization for Massachusetts General and Brigham and Women’s, both teaching hospitals for Harvard Medical School.

“Dr. Robin Jacoby contributed in immeasurable ways to help advance UT Southwestern over the last 11 years. She has been a valued adviser and friend to me. As Chief of Staff, she has been involved in virtually all of our most significant efforts.”

Come for a visit, he said. See the campus, meet some of our people, and consider the possibilities.

A year earlier, Dr. Podolsky had left Boston, where he was Chief Academic Officer at Partners and Chief of Gastroenterology at Massachusetts General Hospital, to become President of UT Southwestern Medical Center in Dallas. In lengthy emails, Dr. Podolsky had shared his bold, ambitious plan for the institution with Dr. Jacoby, who was Chief of Staff to Partners’ CEO.

“Ultimately, I was persuaded by his vision for UT Southwestern, which was brilliant; the people, who were all very warm and welcoming; and my belief in the mission of academic medical centers,” she said. “I left that July visit thinking that Dr. Podolsky was offering me a very special opportunity to make a difference, and after coming back in August for a second visit, I decided to take the leap of leaving Partners and Boston family and friends to come to Dallas.”

Her three-year commitment to serve as Vice President and Chief of Staff to Dr. Podolsky grew to 11, during which time UT Southwestern has been transformed physically, academically, and clinically. This past January, well before COVID-19 completely enveloped 2020, Dr. Jacoby decided that she would retire in September, capping a distinguished career that had been devoted initially to history and then to academic health care.

“Dr. Robin Jacoby contributed in immeasurable ways to help advance UT Southwestern over the last 11 years,” said Dr. Podolsky. “She has been a valued adviser and friend to me. As Chief of Staff, she has been involved in virtually all of our most significant efforts.”

During her time at UT Southwestern, Dr. Jacoby played a vital role in communicating Dr. Podolsky’s vision to the campus and beyond, and her superb editorial skills have enhanced Center Times and the institution’s Annual Review.

In 2010, Dr. Podolsky tapped her to establish the Policy Office, an enormous undertaking that involved collaborating with stakeholders and the Office of Legal Affairs in reviewing and updating more than 500 campus policies and making them accessible to the UTSW community online. She was also the driving force behind the Sources of Truth, a digital resource for accurate information about key aspects of UT Southwestern.

“I’m a big believer that what makes an institution great is not only its excellence in patient care, scientific research, and education, but in everything that goes on in every department at that institution,” she said. “That includes the written word and the accuracy and precision of institutional communications.”

Her impeccably high standards helped forge a connection with Dr. Podolsky in 2005, when they first began working together at Partners HealthCare, now Mass General Brigham.

“Quality and integrity have always been the foundation of our working relationship,” said Dr. Podolsky. “I trust Dr. Jacoby implicitly because I know her work and her advice are always rooted in what’s best for UT Southwestern.”

Among her most cherished experiences during her time at UT Southwestern are her involvement with key milestones such as the opening of William P. Clements Jr. University Hospital and UT Southwestern’s yearlong 75th anniversary celebration.

She was involved in the planning process for Clements and remembers vividly the hospital’s opening in late 2014. 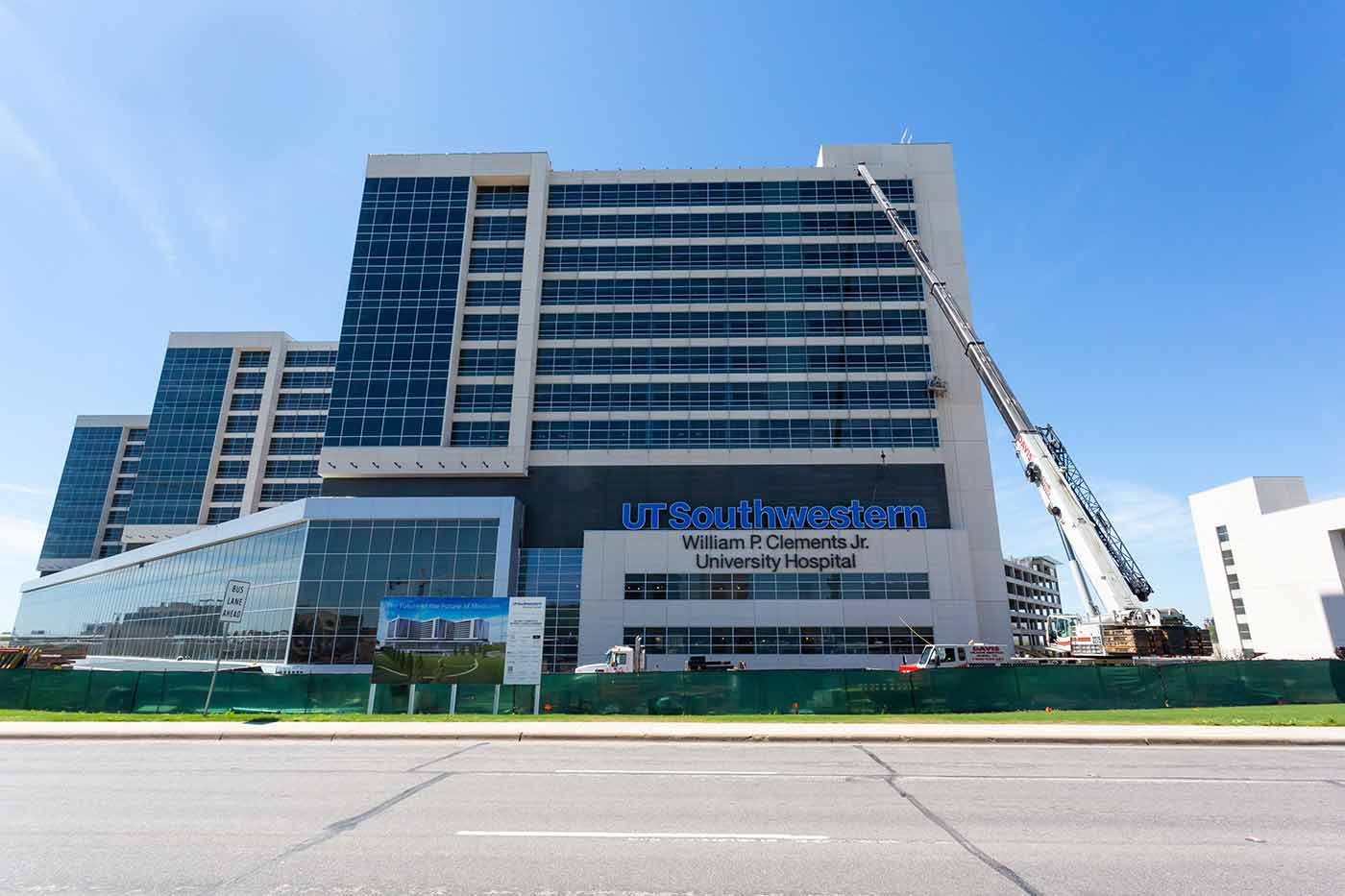 In March, construction crews added new signage to William P. Clements Jr. University Hospital. Since opening in 2014, the hospital has continued to expand and will open a third tower later this year. CUH’s opening was one of Dr. Jacoby's fondest experiences during her tenure at UT Southwestern.

“It was a perfect Dallas day – bright blue sky and warm weather for December. The move from St. Paul University Hospital went flawlessly. The doors at Clements opened at 6 a.m. and by 6:30 there were ambulances at the ER. By 9, the first baby had been born,” she recalled.

“It was a very exciting day for everyone,” she added. “Dr. Podolsky was visibly thrilled, and I was thrilled for him.”

Dr. Jacoby also took particular joy in working on UT Southwestern’s 75th anniversary celebration in 2018 as a member of the planning committee, in part because of her background and training as a historian. She earned her Ph.D. in history from Harvard and spent 18 years as a faculty member in the Department of History at the University of Michigan, although she served primarily in administrative positions in the Provost’s Office and the President’s Office for half of that time. In 1990, she moved to Boston to become Vice President of Radcliffe College.

“As a historian, pulling together the pieces for the 75th anniversary was very gratifying,” she said. “We spend so much time looking forward here, and rightly so, but it can also benefit us to look back, honor the past, and analyze how UT Southwestern got to be the institution it is today.”

Dr. John Warner, Executive Vice President for Health System Affairs, said Dr. Jacoby contributed to many achievements at UT Southwestern over the past decade. “She has been an amazing mentor to me and to the entire UT Southwestern leadership team. She has a real gift for helping us communicate our thinking about institutional priorities in a way that is understandable to stakeholders. I am grateful for her guidance and counsel over her tenure, and appreciate the pivotal role she has played in the advancement of all of UT Southwestern’s core missions.”

In her retirement years, Dr. Jacoby said she is looking forward to living life at a different pace – spending time reading, traveling, volunteering, and doting on grandchildren. She is moving back to Boston, where she will be near her son and his family, and plans to spend time in Denver with her daughter and her family.

But UT Southwestern will always occupy a special place in the Robin Jacoby story.

“In many ways, coming to Dallas was a totally unexpected move for me,” she said. “But it gave me one last big chapter. Participating in the evolution of this institution has truly been a wonderful experience, and I look forward to keeping in touch with Dallas friends and colleagues in the years ahead.”

Dr. Warner holds the Jim and Norma Smith Distinguished Chair for Interventional Cardiology, and the Nancy and Jeremy Halbreich, Susan and Theodore Strauss Professorship in Cardiology.