In his dreams Don Winspear can still slow dance with his wife, just as gracefully as when he met her in high school four decades ago.

But when he awakens, his legs are numb and immobile. A wheelchair is at his bedside. Mr. Winspear is paralyzed from the chest down, a victim of the severest form of a rare neurological illness that struck suddenly in late 2012. He has shown no improvement since being diagnosed with transverse myelitis, yet he still dreams of walking – maybe even dancing again.

“It’s amazing how much you miss just being able to stand and hold your spouse close to you,” said Mr. Winspear, 59. “A nice, long slow dance is the best way to do that.” An innovative treatment being tested at UT Southwestern’s Peter O’Donnell Jr. Brain Institute by Dr. Benjamin Greenberg, Associate Professor of Neurology and Neurotherapeutics, and of Pediatrics, may help Mr. Winspear achieve his dream. By injecting patients with stem cells engineered to repair the central nervous system – called progenitor cells – scientists are working to establish the first treatment that can repair spinal cords inflamed by transverse myelitis.

If successful, the clinical trial could lead to similar therapies for more common conditions such as multiple sclerosis.

“The trial has been 15 years in the making with a huge number of hurdles,” said Dr. Greenberg, explaining the challenges of developing cells that could both find the damaged area and fix the problem. “It offers real hope to people like Don.”

Transverse myelitis is caused by an inflammation in the spinal cord that damages myelin, a protective coating around neurons. The damage inhibits communication between nerve fibers in the spinal cord and the rest of the body, resulting in partial or total paralysis. Most patients at least moderately recover within a few months, while a slim minority face permanent paralysis.

UT Southwestern’s clinical trial will study the safety and effectiveness of implanting these cells into the spinal cord. Ultimately, the hope is to reverse paralysis in patients like Mr. Winspear.

The trial will begin with nine participants with the most severe form of transverse myelitis. Each will receive a one-time injection of progenitor cells designed to produce myelin along the damaged area and re-establish critical nerve signaling.

The cells have successfully repaired the central nervous system in animals and could establish new treatments for other disorders involving damaged myelin. This includes multiple sclerosis and an array of brain and spinal cord conditions such as neuromyelitis optica.

The chance of enduring a transverse myelitis attack in any given year is as little as 1 in a million – less likely than getting struck by lightning. But it did strike Mr. Winspear, in the worst of ways and during one of the happiest times of his life.

Mr. Winspear and his wife Ellen were in North Carolina for their older son’s wedding when he started feeling lower-back pain and intense tingling in his feet.

“I was uncomfortable but just wanted to focus on the beauty of the occasion,” said Mr. Winspear, a longtime Dallas resident. “I took some pain killers, but it only got worse.”

The night after the wedding, he went to a hospital where doctors ordered imaging and noticed a lesion on his spinal cord. While walking back to the gurney he struggled to keep his balance, and within the hour he could no longer uncross his legs as numbness crept up his body.

After learning the diagnosis, Mr. Winspear’s son did a quick internet search and saw that UT Southwestern is one of only two places in the country focused on transverse myelitis.

Mr. Winspear was flown by air ambulance back to Dallas and admitted to an intensive care unit at UT Southwestern where he soon met with Dr. Greenberg, one of the nation’s leading experts on the disorder.

Dr. Greenberg described it as a “whopper of a case” of spinal cord inflammation that forced Mr. Winspear to make long-term, drastic lifestyle changes. Some of his favorite hobbies – from hiking and canoeing to skydiving and scuba diving – were replaced with months of adapting to life as a paraplegic and learning to maneuver in his wheelchair.

“I was frustrated,” Mr. Winspear said. “Moreover I had an incredible sense of guilt because of what this would impose on my wife. She didn’t sign up for this.”

Mr. Winspear had cared for his wife through two bouts of cancer and knew firsthand the challenges of being a caregiver under such difficult circumstances.

“As a caregiver you feel so helpless,” Mrs. Winspear said. “You do the necessary things to get through the day, but all you can give is your support. Sometimes that didn’t feel like it was enough.”

Mr. Winspear disagrees. He said his wife’s support helped him weather one of the toughest stretches of his life, both physically and emotionally. Despite his challenges, he still works as a marketing research consultant and stays physically active, using an elliptical-type glider for cardio exercise and a neuromuscular electrical stimulator. Mr. Winspear is cautiously optimistic that UT Southwestern’s stem cell therapy can help in some way; even the ability to use a walker would be gratifying, he said.

Dr. Greenberg is similarly hopeful the treatment can provide some benefit.

“There’s nothing worse than having a sense of hopelessness,” said Dr. Greenberg. “It’s exquisitely meaningful to show patients with these rare diseases that science is paying attention.”

Mrs. Winspear is more than hoping for the best – she’s expecting it. And besides a slow dance with her husband, she’s already looking forward to a leisurely walk down the street while holding hands.

“His wheelchair is fast,” she joked. “I’ve needed my jogging shoes to keep up with him.”

Dr. Greenberg is a Cain Denius Scholar in Mobility Disorders. 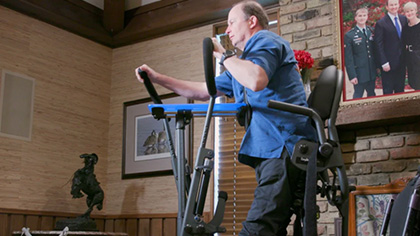 About the clinical trial:

Q Therapeutics, a developer of clinical-stage cell therapies for central nervous system diseases, is providing the progenitor cells and trial support. The Transverse Myelitis Association, a nonprofit advocacy organization dedicated to rare neuro-immune disorders, will help locate participants and facilitate their travel to Dallas. The trial is funded in part by Q Therapeutics, the Transverse Myelitis Association, the Lyda Hill Foundation, and the M.R. and Evelyn Hudson Foundation.

The trial is overseen by Dr. Benjamin Greenberg, who leads the Conquer programs at UT Southwestern, including the Transverse Myelitis and Neuromyelitis Optics Program and the Pediatric Conquer Program at Children’s Medical Center Dallas. For more information about the trial, contact Jan Cameron Watts at jan.cameronwatts@utsouthwestern.edu or 214-648-0363.

Disclosure statement: Dr. Greenberg serves (unpaid) on the board of the Transverse Myelitis Association.