Dr. Rody Cox is known for his crisp signature bow tie, his pressed white coat, and his memory that holds over 90 years of life experiences. After 31 “wonderful” years at UT Southwestern, and 67 years as an attending physician, Dr. Cox has stopped making rounds and retired. 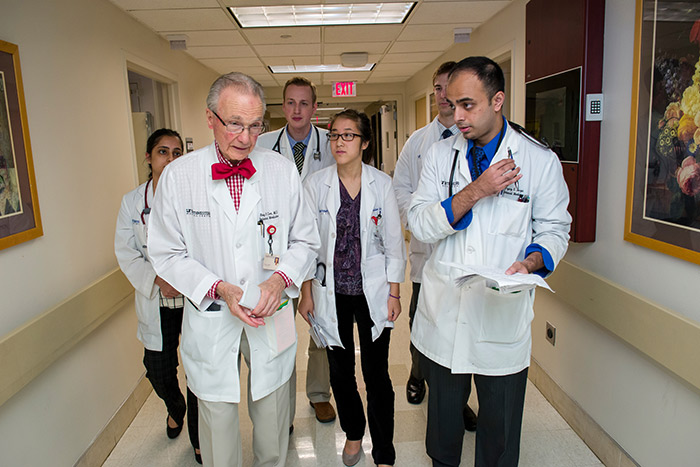 In honor of his longtime dedication to UT Southwestern and accomplishments, Dr. Cox, 93, has been named Professor Emeritus of Internal Medicine.

In 1988, Dr. Cox joined UT Southwestern as Dean of the Medical School. Through his career, Dr. Cox admits his affinity has been for medical education and studying genetics. Because the deanship role limited opportunities for these passions, he resigned after a year and a half.

“I found that being a dean, you have to be available,” Dr. Cox said. “I couldn’t do the things I really liked to do, which was teach medical students and residents and run my laboratory.”

Dr. Cox has enjoyed the multiple roles of clinician, researcher, and educator only available at an academic medical center such as UT Southwestern. His accomplishments include participating in study sections for metabolic biology at the National Science Foundation and serving with the National Institutes of Health as a member of the Metabolism Study Section, Chairman of the Genetics Study Section, and Chairman of the Mammalian Genetics Studies Section. He also served as a member of a panel on clinical sciences for the National Research Council.

Among his many honors, Dr. Cox has received outstanding teaching awards from both UT Southwestern and Case Western Reserve University Medical School. Of particular note was his receipt of a Distinguished Clinical Science Educator Award from UT Southwestern’s Nobel Laureate and former Dean, the late Dr. Alfred Gilman.

The impetus for his illustrious career began at a young age. As a boy, Dr. Cox knew he wanted to be a doctor. He lived next door to a physician whose work impressed and influenced him. This was the era of the Depression and prohibition, so oftentimes patients paid that doctor with chickens, corn, and tomatoes. The doctor enjoyed his practice and knew his patients well.

Related Video: Dr. Cox reflects on his 60-plus years in medicine

A microscope that Dr. Cox’s parents bought him when he turned 7 years old opened his eyes to a new world. He investigated the microscopic appearance of insects and tadpoles found outside his home. These experiences stimulated a lifelong interest in biology and in the complexities of life.

Another passion for him growing up was reading books on medicine and biology. One in particular made a great impression on him, The Microbe Hunters, featuring short stories of leading scientists in bacteriology and microbiology such as Louis Pasteur, Robert Koch, and Élie Metchnikoff.

As a sophomore in high school, Dr. Cox took a course in parasitology at a nearby college. (Little did he know that decision would play an important role in his World War II military service.) Upon enlisting in the Army at age 17, Dr. Cox trained as a combat medic. His unit was destined to go to Iwo Jima as replacement medics for the invasion. Instead, the Army sent Dr. Cox to the Egyptian Department of Medical Affairs in Cairo, Egypt. His experience in microscopy made him an ideal candidate as laboratory technician for Dr. Claude Barlow, who investigated schistosomiasis, a disease caused by parasitic worms that affected troops in the South Pacific and Asia. Dr. Cox worked with Dr. Barlow for about a year. They investigated snails that could serve as intermediate hosts for the complex lifecycle of the schistosomes in the United States.

He then worked for Guido Pontecorvo in Scotland, studying mitotic recombination in the fungus Aspergillus, before being recruited to New York University School of Medicine and becoming Director of the Medical Scientist Training Program and Director of the Division of Human Genetics. 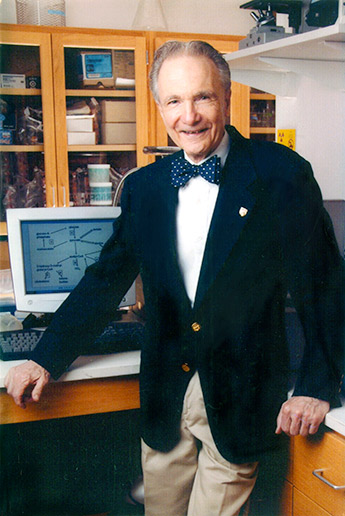 Dr. Cox, at his desk in 2007, the same year he was named Master of the Medical School’s Estabrook College.

Dr. Cox next joined Case Western Reserve University Medical School in 1978 as Vice Chairman of the Department of Internal Medicine and Chief of the Medical Service at the Cleveland VA Medical Center. There, he developed a strong program in gene activation and epigenetic mechanisms of gene control. He also began a 40-year collaboration with Dr. David Chuang, Professor of Biochemistry and Internal Medicine at UT Southwestern, on errors of mitochondrial amino acid metabolism. He then came to UT Southwestern in 1988, where he stayed until retirement.

“I think one of my talents has been my ability to relate basic science principles to clinical medicine,” Dr. Cox said. “I have thoroughly enjoyed my three decades of working at UT Southwestern.”