Judy Danielson, 61, is a Parkinson’s disease patient and she’s a boxer.

When she was diagnosed three years ago, she couldn’t imagine that these two descriptors could fit together.

The first thing I thought of [after being diagnosed] was: This is not the plan I had for my life. This is not what my retirement was going to be. I’m not in a relationship, I’m single –what’s going to happen to me? Who’s going to take care of me? Ms. Danielson said.

As Parkinson’s progresses, it burdens patients with tremors and makes it difficult for them to walk or control their balance and movements, among other symptoms.

Ms. Danielson, a patient at UT Southwestern, had experienced a series of falls, so when her physical therapist recommended she participate in a research program studying the effects boxing has on the symptoms of Parkinson’s patients, she feared falling again.

But Ms. Danielson decided to give the class a try anyway.

On the first day she experienced a discouraging moment when she was unable to do an exercise that required patients to walk around a row of traffic cones.

That experience made her cry. And it wouldn’t be the last time navigating those cones would make her cry.

Creating a ‘new sense of hope’

The boxing research study began as a passion project for Dr. Michael Braitsch, a physical therapist and 2016 graduate of the UT Southwestern School of Health Professions. It was intended as a 10-week program, but it received such positive feedback that some faculty members encouraged him to continue the course beyond his graduation.

Thanks to that encouragement, Dr. Braitsch focused on opening a rehabilitation clinic that also offered the boxing course to interested Parkinson’s patients. He teamed up with Dr. Staci Shearin, Assistant Professor of Physical Therapy and a clinician who primarily works with patients with neurological disorders, so they could launch a study to determine the larger impact of the exercise.

What’s gotten better for our fighters [is that] I’ve seen a lot of them gain a new sense of hope that a diagnosis of Parkinson’s does not mean a death sentence – that they can still take positive action and live well, Dr. Braitsch said. I’ve seen people with a whole new sense of confidence. I’ve had people who have told me before they started boxing with us that they were falling on a regular basis, and now they can take the trash out on their own without an assisted device. 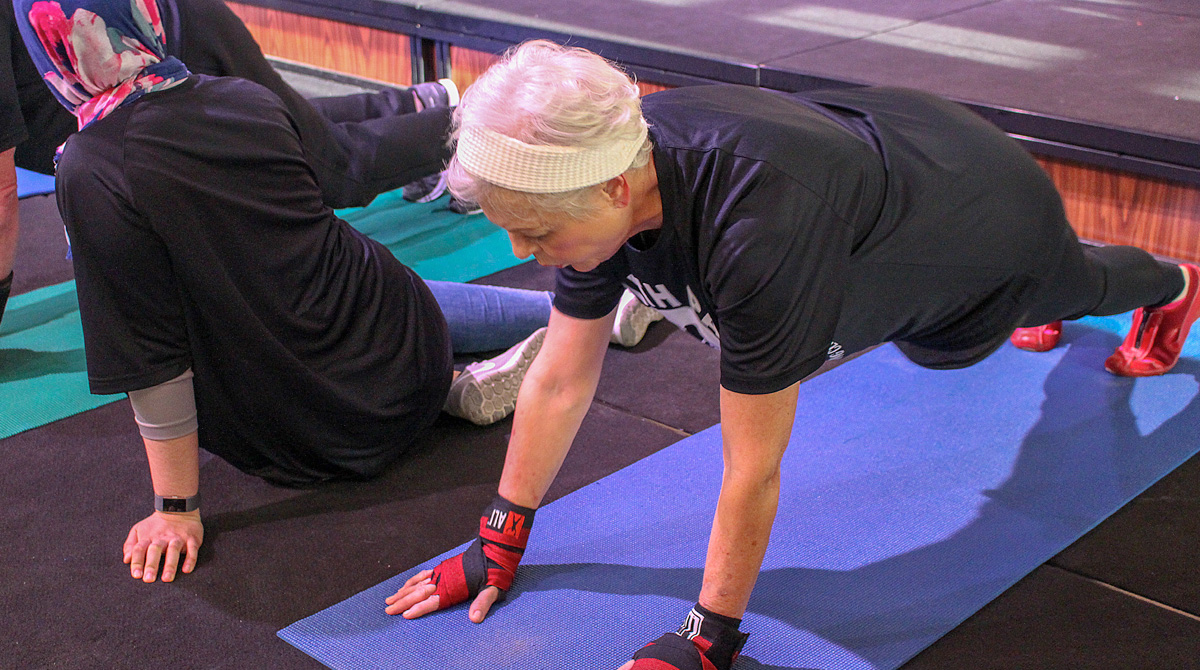 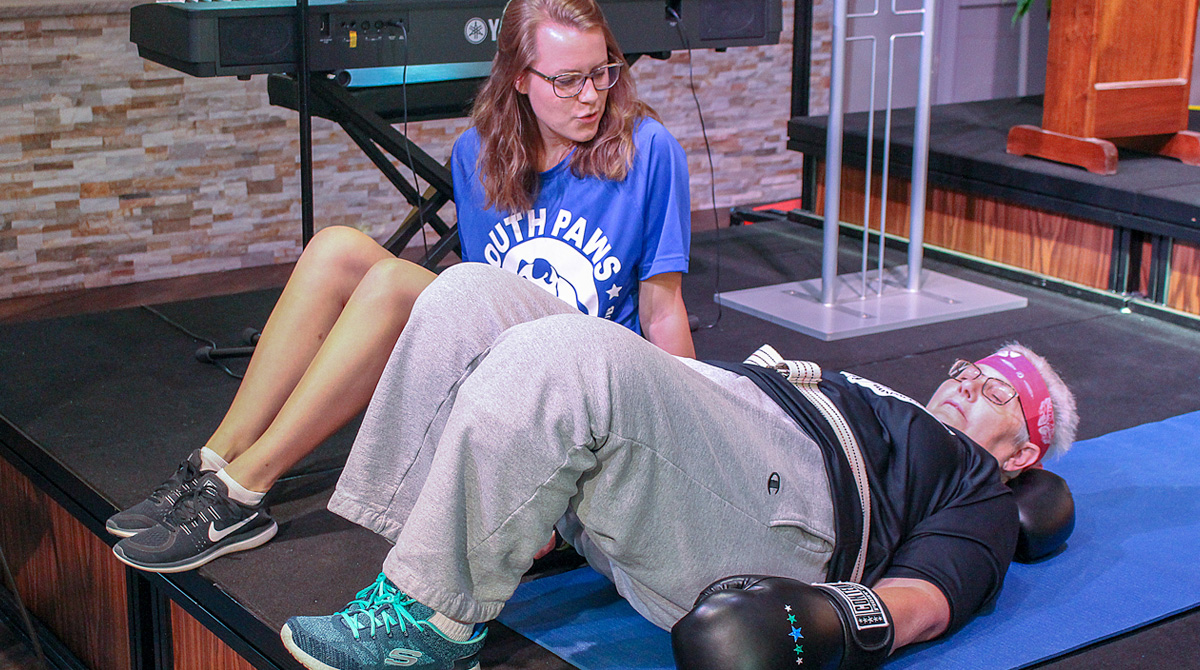 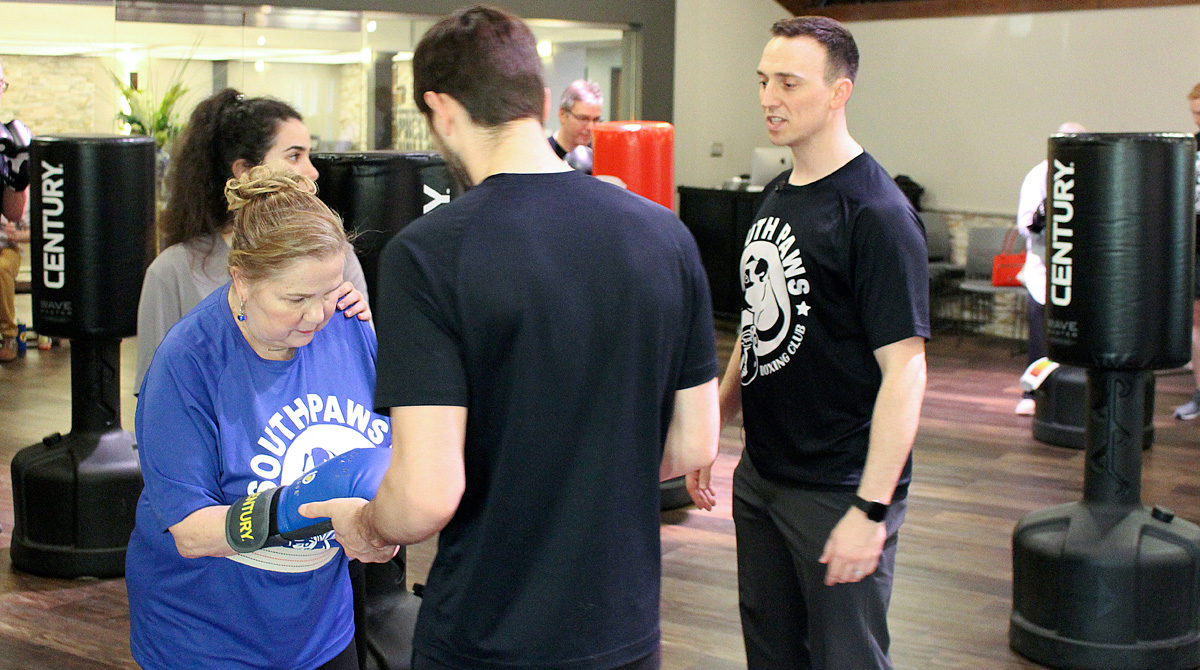 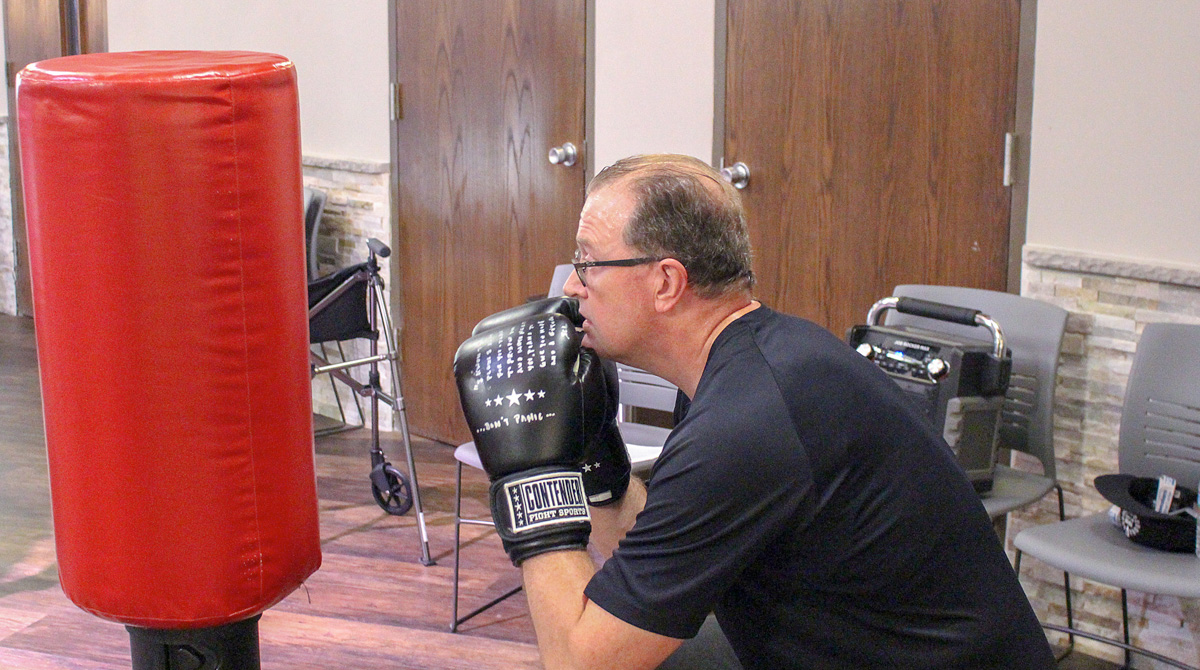 A class participant performs squats during his boxing workout. 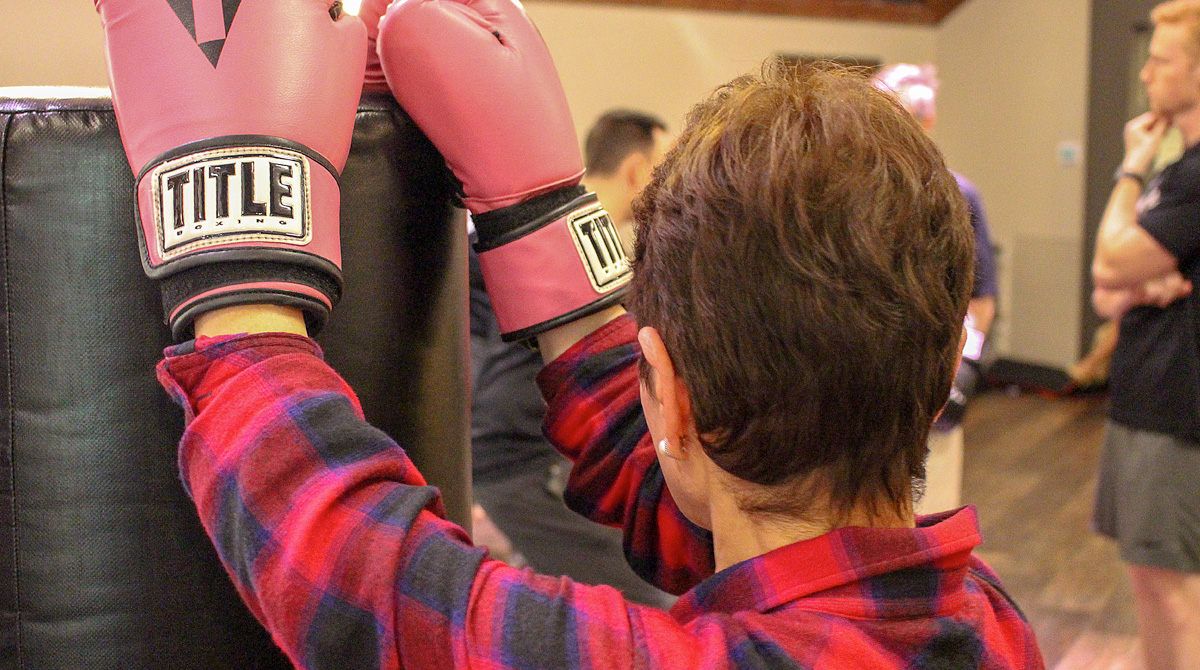 A class participant keeps her balance during class warmup.

One of those patients is Ms. Danielson, who had been in tears when she first tried the exercise involving the traffic cones. However, three weeks before she completed her participation in the research study, she cried again – but those were happy tears: She did the exercise perfectly.

Parkinson’s robs you of so many stupid things, Ms. Danielson said. Like I can’t cut meat. That’s pretty common in Parkinson’s. I can’t push a chair up to the table. But I can walk around the cones,she said with a laugh.

She said the course has given her a new boost of confidence and helps her focus on the things that she can do.

When the course was still a pilot program, Dr. Braitsch led just two classes a week at Preston Hollow United Methodist Church in Dallas. He started his company Tribe Wellness in February 2017, soon after passing his board exams, and that September was able to move the classes to his own leased space in Richardson. The name Tribe Wellness comes from the idea that a tribe is a supportive community.

Throughout the week, the clinic offers 17 group exercise classes specifically geared to Parkinson’s patients, including no-contact boxing, kung fu, tai chi, and boot camp style fitness classes. All these classes serve as an additional aid to those patients’ physical therapy.

Because it’s a group program, there’s no way something like this should be a replacement for physical therapy, Dr. Braitsch said, but I think it can really nicely complement what people are doing in one-on-one therapy and offer them a way to continue beyond the scope of their normal plan of care.

Many of the participants in the daily boxing classes at his rehab clinic first participated in the research study.

Dr. Shearin, the study’s Principal Investigator, said boxing is an ideal discipline to investigate how Parkinson’s patients respond to exercise because of its level of intensity and because it incorporates strength, endurance, and flexibility training – which are all important areas to work on with this patient population.

When we look at the literature for what exercise does for Parkinson’s patients, it’s really amazing. Of all the things [researchers] found that can affect the progression of Parkinson’s, they think exercise is probably one of the most important. And so what we find is that the higher the intensity of exercise, the better the benefits, she said.

In our data, we’ve seen it improve patients’ cardiovascular endurance. We’ve seen some really cool results in functional mobility, in dual tasks – which is a really important thing for balance and safety for individuals with Parkinson’s and their ability to do two things at once, Dr. Shearin added.

Dr. Braitsch has continued his relationship with Preston Hollow United Methodist Church, where the research courses are held two nights a week during a 12-week term. The study is funded by the Parkinson’s Foundation and began its third trial period in May.

As the study continues, the researchers hope they can extend the trial periods from three months to a year to better examine the long-term effects on patients. Their ultimate goal is to develop guidelines for other physical therapists to be able to use boxing as part of their rehabilitation practices as well.

The research course also provides practical clinical training for UT Southwestern students pursuing their doctorates in physical therapy by allowing them to work closely with the patients during workouts.

It’s been really awesome to be part of this program, said UTSW School of Health Professions student Brandon Newsom, who started working with Dr. Braitsch’s classes in 2017 while he was a first-year physical therapy student.

At that point, I didn’t know a whole lot about Parkinson’s or how it affects people, but getting that hands-on experience, I started seeing some of the normal things in the population and then I started gaining skills. So, when we actually got into the classwork where we learned all about Parkinson’s disease, I was able to pull experiences from the program and relate it to all that.

I think the biggest thing I’ve taken from this class is not necessarily how to treat somebody with any specific pathology, but just the importance of the community involvement with people, he said.

Dr. Braitsch agreed that having a community to share the challenges they experience because of Parkinson’s contributes to patients’ successes.

People with Parkinson’s are more inclined to have anxiety or depression and that can lead to isolation, and if they’re isolating themselves, they’re probably not getting the physical work they need – and then the symptoms just worsen, Dr. Braitsch said. However, when a community is supporting each other – even if you’re having a rough day, you’re still more likely to show up to class and find a way to participate and have a good time.

Ms. Danielson said she never imagined she’d be a fan of boxing before taking the course, but now she clearly sees that the class has had both physical and emotional benefits. Plus, she’s also enjoyed the bond it’s provided with other Parkinson’s patients and even physical therapists.