This story was originally posted on Center Times Plus on April 10.

When deadly diseases emerge around the world, UT Southwestern’s top infectious disease specialist is often called in due to her expertise in preventing disease transmission, particularly in health care settings.

Dr. Trish Perl flew to Africa to train health care workers battling the 2014-16 Ebola epidemic. She traveled to Saudi Arabia when Middle East respiratory syndrome (MERS) broke out there, and to Toronto to help with an earlier respiratory illness called SARS.

On May 2, Dr. Perl, Chief of the Division of Infectious Diseases and Geographic Medicine, will talk about “Emerging Infections: The Good, the Bad, and the Ugly” at 4 p.m. in the Tom and Lula Gooch Auditorium on South Campus.

Dr. Perl has published research on the best ways to keep workers from getting an infection from patients, and last year led the effort to draft World Health Organization (WHO) guidelines for protective gear worn by those treating or coming in contact with Ebola patients.

She will share lessons learned while fighting Ebola, a disease that causes internal and external bleeding and is now active again in Africa, as well as the two serious respiratory illnesses she helped deal with: MERS, found to be linked to camels, and severe acute respiratory syndrome (SARS), traced to the catlike Asian civet. Oftentimes, because of her expertise, Dr. Perl is called in when these infectious diseases – new or old – escalate to epidemic proportions.

Such deadly infectious diseases can have a devastating impact on not just the population but also on those who treat the sick, Dr. Perl said, since nurses and doctors can suffer high mortality rates due to their close contact with patients. Health care workers sometimes develop post-traumatic stress disorder (PTSD) as they watch colleagues die and fear for their own lives, said Dr. Perl, who is also Professor of Internal Medicine.

One doesn’t have to go to the other side of the world to find infectious diseases, she added. Dallas, with the U.S.’s fourth-busiest airport, receives travelers from around the globe, and is becoming increasingly hospitable to disease-carrying vectors due to climate warming.

In 2012, Dallas was the epicenter of the largest West Nile outbreak in the country. Mosquitoes carry the virus involved, which sometimes affects the central nervous system and can lead to death.

Two years ago, Dallas reported the nation’s first sexually transmitted case of Zika, another viral infection most often seen in South America and also spread by mosquitoes. It can cause a serious birth defect in which the baby’s brain and head are smaller than normal.

As more and more infectious diseases emerge, and reemerge, academic institutions like UT Southwestern will need to play an increasingly important role in helping with investigations, Dr. Perl said. For example, she noted that an academic institution identified the virus involved in MERS.

As the range for vectors like mosquitoes expands, and world travel increases, Dr. Perl thinks we’ll see more and more infectious agents that are new to our area. For example, she speculated, “We may start seeing yellow fever, which has been primarily in South America.”

Dr. Perl came to UT Southwestern from the faculty of Johns Hopkins University School of Medicine, one of the nation’s first Centers of Excellence for health care-associated infections.

For Dr. Perl, this is an exciting time to be at UT Southwestern. Its long-standing strengths as a research, clinical, and education center create the opportunity for the Medical Center to play a leading role in researching outbreaks of infectious diseases.

“We have a lot of expertise here at UT Southwestern and in Dallas,” Dr. Perl said. “I look forward to being involved in the effort to reduce the human toll of infectious diseases here in Dallas, Texas, and worldwide.” 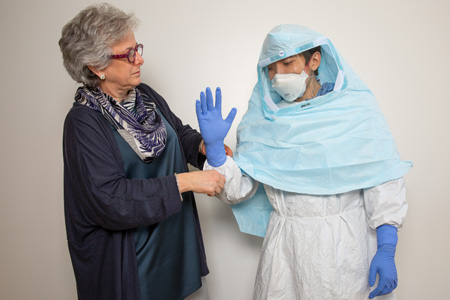 Thursday, May 2
4-5 p.m., with a reception immediately following
Tom and Lula Gooch Auditorium on South Campus
Presentation: “Emerging infections: The Good, the Bad, and the Ugly”