Brain power to the max

Whole brain microscopy allows researchers to peer inside neurons at the deepest cellular levels – and faster than ever before.

Inside a small room on the North Campus sit the Whole Brain Microscopy Facility’s most prized possessions – the only TissueCyte microscopes known to exist in Texas, two of perhaps a couple dozen in all the world. The black 3-by-3-foot cubes issue a faint whir as, within a plexiglass box just inside the open front, a razor blade patiently makes its way across what looks like a small chickpea, skimming off a paper-thin slice before returning to its perch to start the process again.

“That’s a mouse brain,” says Dr. Denise Ramirez, Manager of the Facility, nodding toward the chickpea-shaped orb. And that thin slice now curling down its side? “That’s a little slice of brain.”

Eight to 12 hours and about 190 blade trips later, all that remains is a pile of tiny translucent slices, as well as the images inside the TissueCyte’s computers that were taken of the mouse brain as each layer was cut away. High-powered computers will piece together the electronic images from the TissueVision TissueCyte 1000 to construct a full brain of neurons with their dendrites and axons into something that looks very much like a fishing net dotted with tiny buoys.

The TissueCyte, along with the Facility’s other powerful high-throughput microscopes that can take images from hundreds of samples at once, has accelerated brain research at UT Southwestern. Bought with state tax dollars, the instruments are available to other researchers in Texas and elsewhere – although at a higher fee than that paid by UT Southwestern researchers.

The two microscopes cost $1.2 million when purchased, using most of the $1.5 million allocated through UT Southwestern’s Texas Institute for Brain Injury and Repair (TIBIR) to found the Facility, says Dr. Julian Meeks, Associate Professor of Neuroscience and Neurology and Neurotherapeutics and Director of the Facility. The Facility opened in 2014 and is part of the Peter O’Donnell Jr. Brain Institute.

The TissueCyte allows simultaneous investigation of pathology in three dimensions. Dr. Marc Diamond, Director of the Center for Alzheimer’s and Neurodegenerative Diseases, researches how tau protein accumulates in brains, using mouse models of Alzheimer’s disease to better understand its progression. Specifically, he wants to understand the speed and territory the tau protein covers as it moves through the brain.

Dr. Mark Goldberg, Professor of Neurology and Neurotherapeutics, studies how the brain rebuilds and reroutes neuron pathways after an injury. Before the TissueCytes became available on campus, Dr. Goldberg’s students had the painstaking task of counting by hand each neuron within a mouse brain that was involved in certain movements … literally millions of cells. With the TissueCyte, work to map the neurons linked to a particular movement that once took a year can be done in a few weeks, he says.

Dr. Bhavya R. Shah, Assistant Professor of Radiology in the Division of Neuroradiology and in the Advanced Imaging Research Center and Neurological Surgery, uses the TissueCyte to examine small sections of human cadaver brains to find the precise location to treat movement-related disorders with high intensity focused ultrasound. HIFU is a non-invasive, image-guided procedure that can treat areas of the brain across an intact skull.

The Facility also offers the Hamamatsu NanoZoomer and Zeiss Axio Scan.Z1 microscopes, each of which can convert stained tissue slices mounted on glass slides into high-resolution digital data via high-speed scanning. The NanoZoomer is for examining traditional dye-stained slides, while the Axio Scan can be used to see inside cells highlighted by methods that create fluorescent signals, says Dr. Ramirez, Assistant Professor of Neurology and Neurotherapeutics. 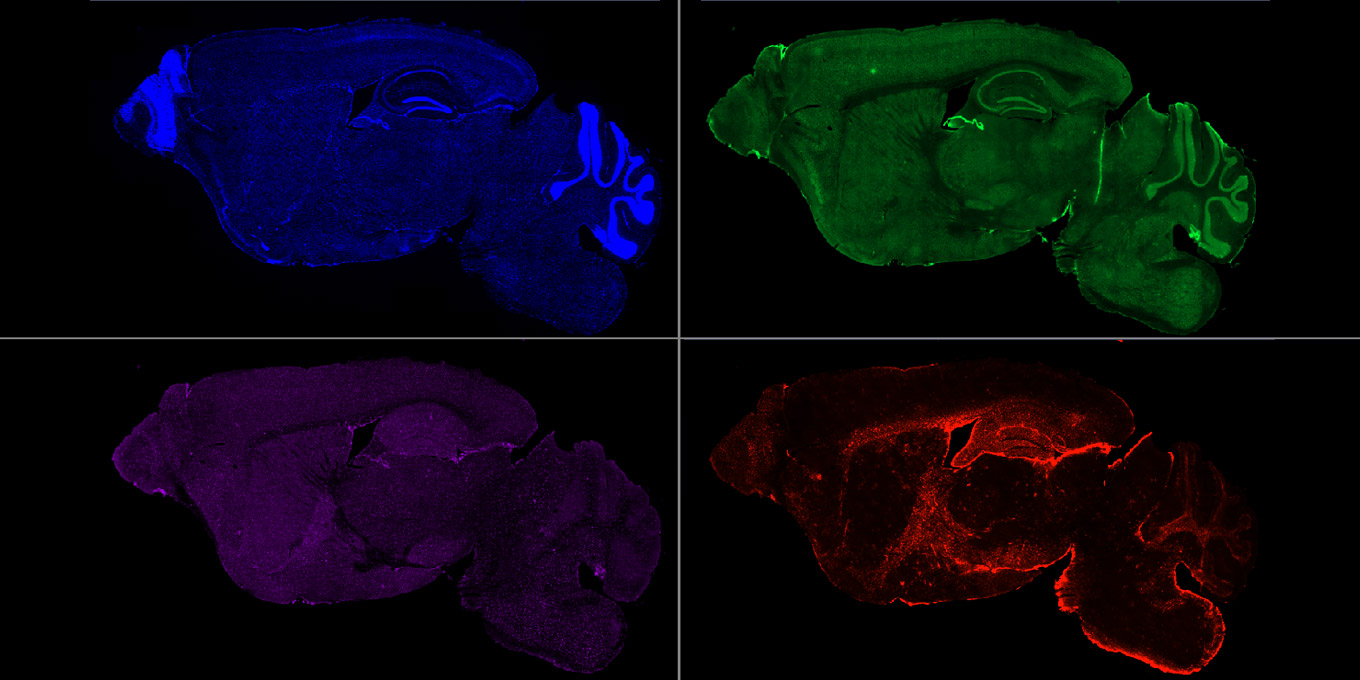 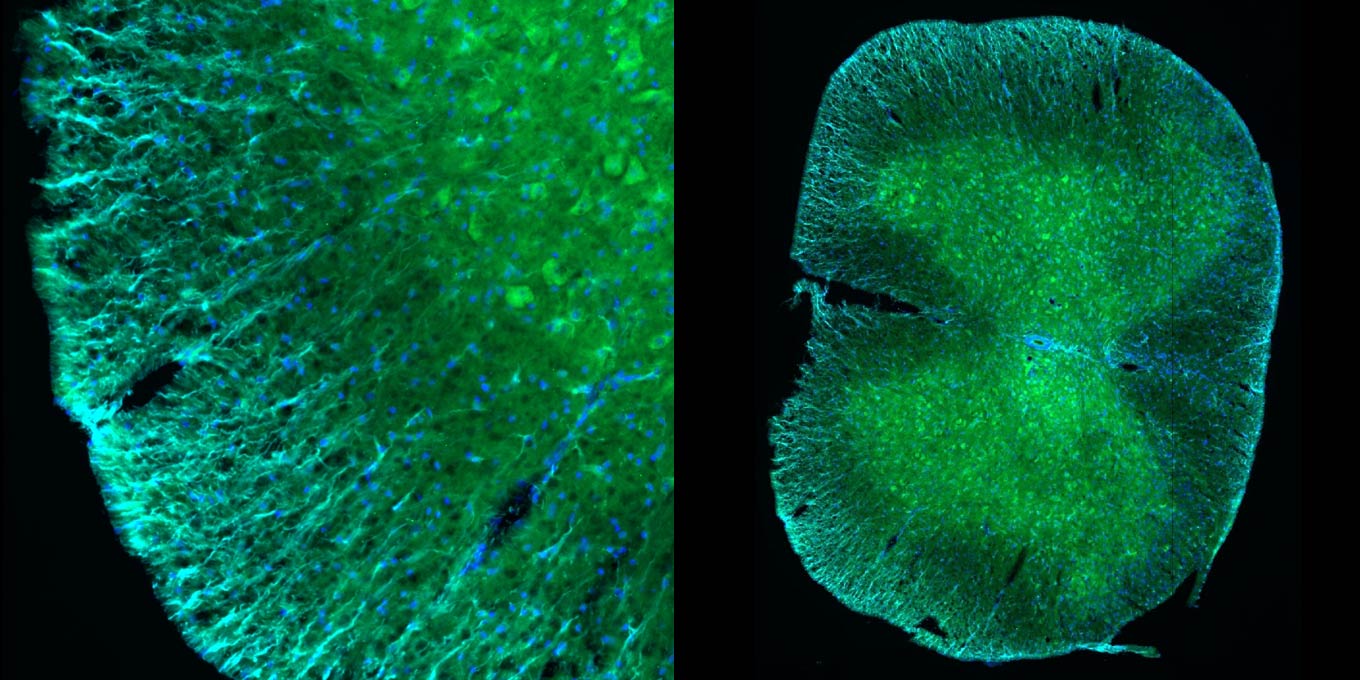 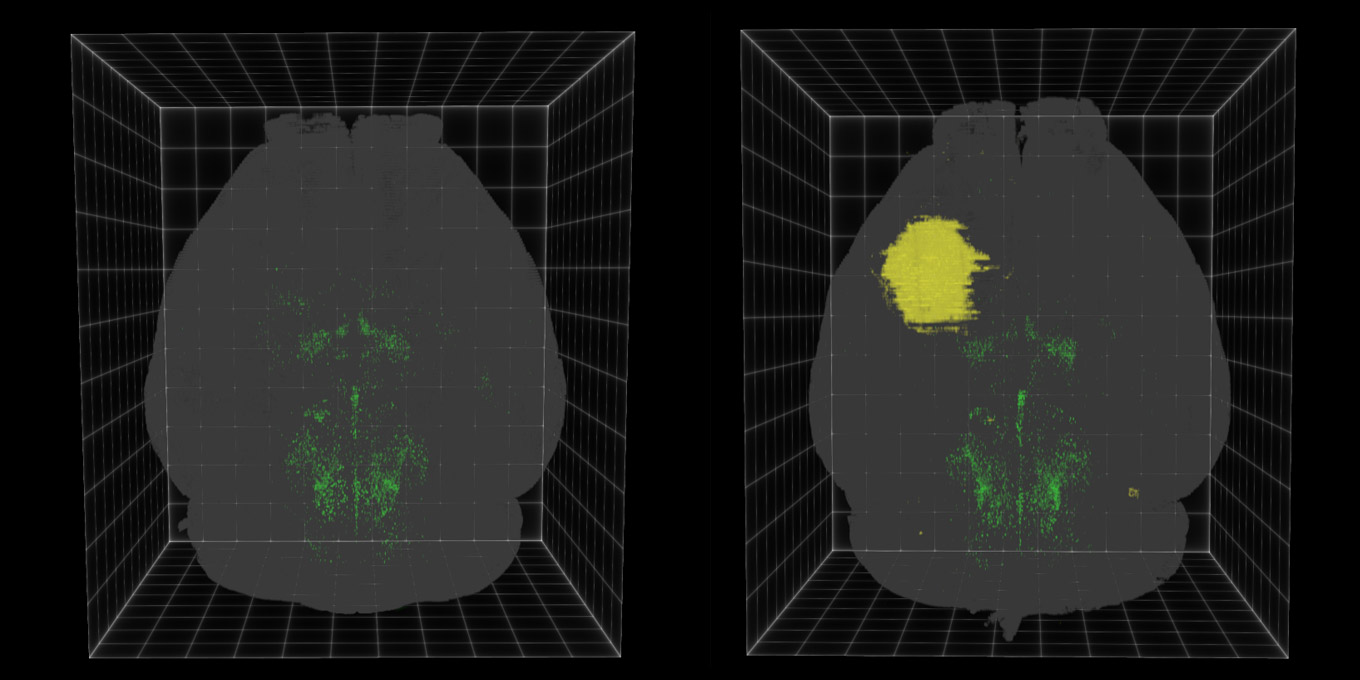 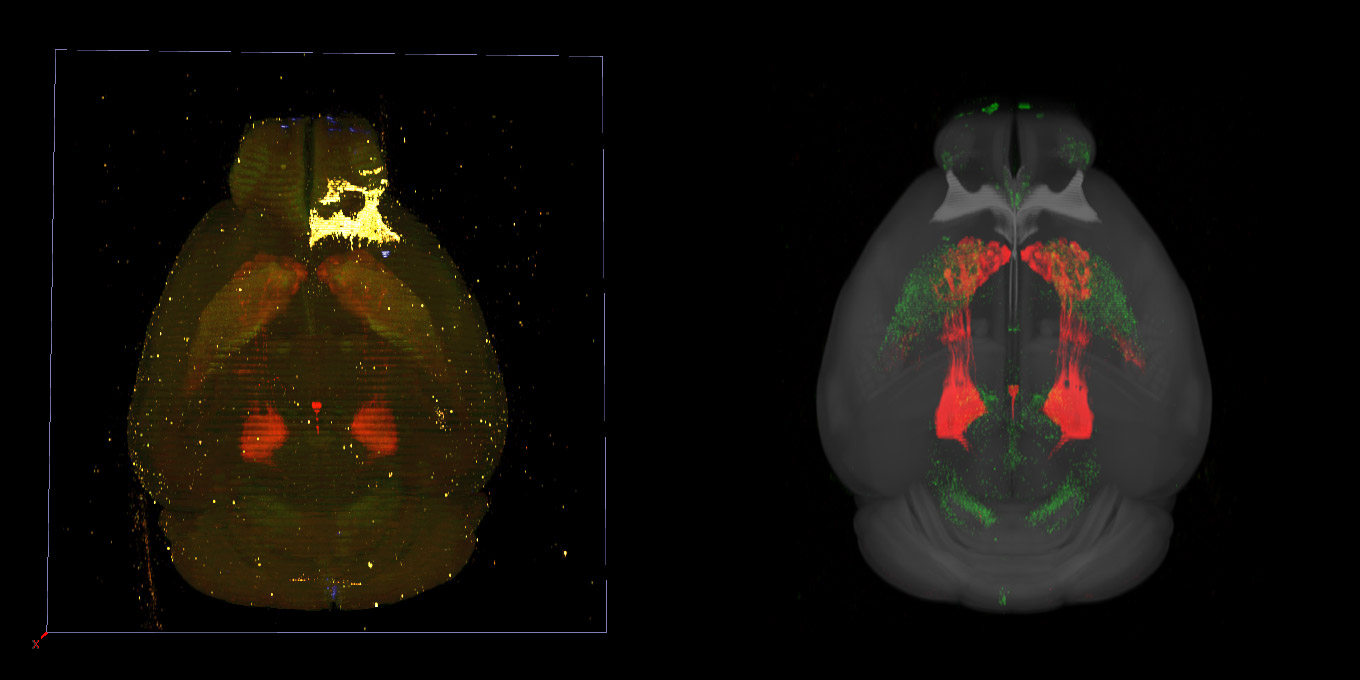 Neurons involved in neuropsychiatric conditions such as autism are labeled with red or green fluorescence in this 3D reconstruction of a mouse brain (left). Right image shows results of applying machine learning-based computational methods to emphasize those neurons.

Due to the brain’s complexity and the interest in better understanding conditions like depression, Parkinson’s disease, and Alzheimer’s disease, researchers are constantly pushing the engineering of microscopes to the next level, Dr. Meeks says.

With the new equipment, maps outlining all the regions of a normal mouse brain have become available in digital 3D atlases that researchers can use for comparison as they look for signs of damage or disease.

Even as UT Southwestern provides access to TissueCyte technology, Dr. Meeks evaluates new technology for researchers using his Facility. Light sheet microscopy, which offers the potential for massive increases in processing speed and optical resolution, looks like an attractive next step, he says.

Meanwhile, investigators inside and outside UT Southwestern line up to use the TissueCyte, Dr. Ramirez says.

Researchers who would like to use the Facility’s instruments can find information on its website or by contacting Dr. Ramirez by Denise.Ramirez@UTSouthwestern.edu.

Dr. Diamond, a Professor of Neurology and Neurotherapeutics and Neuroscience, holds the Distinguished Chair in Basic Brain Injury and Repair.

Dr. Goldberg is also Associate Vice President for Institutional Advancement at UT Southwestern with a focus on the O’Donnell Brain Institute.

Stay up to date