Leading the state in HHMI Investigators

UT Southwestern – which leads the state in the number of Howard Hughes Medical Institute (HHMI) Investigators – recently added its 15th with the selection of Dr. Ralph DeBerardinis.

Dr. DeBerardinis, Professor at the Children’s Medical Center Research Institute at UT Southwestern (CRI) and Chief of the Division of Pediatric Genetics and Metabolism, is also a member of the University’s Eugene McDermott Center for Human Growth and Development. The HHMI – a philanthropic organization created to advance basic biomedical research and science education – named a select group of 19 distinguished biomedical scientists as Investigators this year. Each new investigator will receive roughly $8 million over a seven-year term.

“We are delighted that the Howard Hughes Medical Institute has recognized the significance of Dr. DeBerardinis’ research accomplishments and his promise to make important advances in the future. His efforts have already led to important new insights into distinctive alterations in the metabolic pathways in cancer cells,” says Dr. Daniel K. Podolsky, President of UT Southwestern. “We are confident that his laboratory will build on this foundation with the opportunity it offers to establish new paradigms for therapeutic strategies.”

Notably, the DeBerardinis laboratory found that lactate provides fuel for growing lung tumors, a finding that challenges a nearly century-old observation known as the Warburg effect, which had called lactate a waste product of tumor metabolism. That finding provides a novel perspective on cancer metabolism and opens new avenues for the study of potential therapeutics, as well as new imaging techniques in lung cancer, the world’s leading cause of cancer deaths.

Dr. DeBerardinis, holder of the Joel B. Steinberg, M.D. Chair in Pediatrics and a Sowell Family Scholar in Medical Research, earned his M.D. and Ph.D. from the University of Pennsylvania. He was the first trainee in the combined Pediatrics and Medical Genetics residency program at the Children’s Hospital of Philadelphia, where he received several awards for teaching and clinical care. He joined the UT Southwestern faculty in 2008 and then CRI at UTSW, soon after its founding in 2012. He became Director of CRI at UTSW's Genetic and Metabolic Disease Program in 2014.

That study, by Dr. Ryan Hibbs’ laboratory, used specific antibodies to distinguish different subunit assemblies of the most abundant class of the brain’s nicotinic acetylcholine receptors. That work could lead to new ways to treat nicotine addiction from smoking or vaping. Dr. Hibbs is Assistant Professor of Neuroscience and Biophysics with the Peter O’Donnell Jr. Brain Institute at UT Southwestern as well as an Effie Marie Cain Scholar in Medical Research.

Drs. Youxing Jiang and Xiaochen Bai – who were profiled in the March issue of In Pursuit, have now published three structures in Nature. Dr. Jiang, Professor of Physiology and Biophysics and an HHMI Investigator, is a W.W. Caruth, Jr. Scholar in Biomedical Research. Dr. Bai, Assistant Professor of Biophysics and Cell Biology, is a Virginia Murchison Linthicum Scholar in Medical Research.

Additionally, Dr. Daniela Nicastro – Director of the CEMF and an Associate Professor of Cell Biology and Biophysics – recently published a study in Science on sea urchin sperm. That study used cryo-electron tomography to investigate how the action of thousands of motor proteins, called dyneins, are coordinated to produce the undulating motion of cilia and flagella. Her lab found that force imbalance is generated by inhibiting dyneins on alternating sides of the flagellum, the whip-like tail of a sperm cell, as demonstrated in this video.

The motility of cilia and flagella are critical for embryonic development and organ function, including clearing pathogens from the lungs. Problems in their assembly or function lead to a range of diseases termed ciliopathies.

UT Southwestern Professor Dr. Zhijian “James” Chen has been awarded the 2018 Lurie Prize in Biomedical Sciences for his discovery of the cGAS enzyme, a sensor of innate immunity.

The prestigious award was presented by the Foundation for the National Institutes of Health on May 16 in Washington, D.C., in recognition of Dr. Chen’s discovery of the cGAS enzyme and its DNA-sensing pathway and their impact on immune defense and autoimmune disease. The prize includes a $100,000 honorarium made possible through a donation by philanthropist Ann Lurie.

“This huge honor is a testament to the talented students, postdocs, and staff scientists in my lab at UT Southwestern, whose dedication and hard work led to several discoveries,” says Dr. Chen, a Professor of Molecular Biology with a secondary appointment in the Center for the Genetics of Host Defense. “It has been a privilege to work at such a great institution, where scientists are nurtured, discoveries are highly valued, and the leadership support is outstanding,” he adds.

When the cGAS enzyme senses DNA in the cell’s cytoplasm, it alerts the immune system by producing a small molecule called cyclic GMP-AMP (cGAMP), which functions as the messenger to the body’s first line of defense, the innate immune system.

“cGAS is like a burglar alarm, and cGAMP is like the electric signal generated by the burglar alarm,” says Dr. Chen, who is also an HHMI Investigator, Director of the Center for Inflammation Research, and holder of the George L. MacGregor Distinguished Chair in Biomedical Science. "This burglar alarm system is turned on when a danger is detected.” 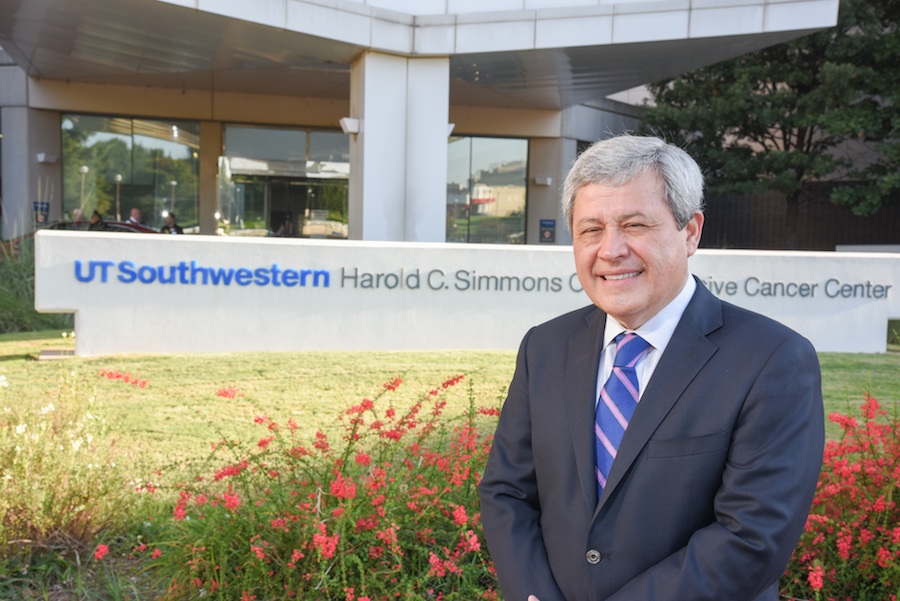 More than a dozen UT Southwestern Simmons Cancer Center researchers have received $16 million in awards from the Cancer Prevention and Research Institute of Texas (CPRIT) for research into breast, prostate, brain, kidney, liver, and pediatric cancers.

The grants are part of more than $27 million CPRIT recently awarded UT Southwestern to support research for innovative ways to restore immunity against cancer, to combat cancer therapy resistance, and to develop nanosensor technologies to illuminate cancer tissues to improve cancer staging, along with outreach cancer screening programs to underserved communities.

Among other efforts, these grants fund research on the role played by extra chromosomes in the development of liver cancer, continue work on a way to illuminate cancer, and support hepatitis C screening among baby boomers, says Dr. Arteaga, Associate Dean for Oncology Programs, who holds The Lisa K. Simmons Distinguished Chair in Comprehensive Oncology.

Stay up to date