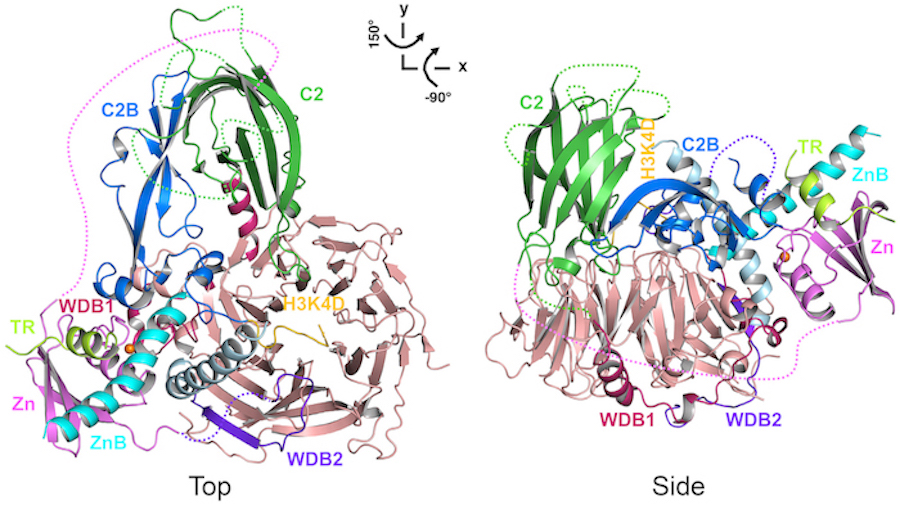 A team of researchers from the Departments of Obstetrics and Gynecology and of Biophysics have furthered fundamental knowledge into how the gene regulation-connected enzyme complex PRC2 is structured, changes forms, and is recruited to chromatin during development. Illustration courtesy of Dr. Xin Liu

DALLAS – April. 18, 2018 – A team of UT Southwestern researchers is making headway in unlocking the function of an enzyme complex that, when dysregulated in humans, is widely associated with developmental disorders and cancers, such as blood, prostate, and breast cancers, as well as childhood glioblastoma.

A research team from the Departments of Obstetrics and Gynecology, and Biophysics, led by Dr. Xin Liu, investigated the structure and function of polycomb repressive complex 2 (PRC2), an enzyme complex that plays a central role in gene regulation. The complex regulates gene expression during development by altering chromatin structure, which is the way DNA is packaged with proteins inside cells. The study reveals two unique structural platforms that control complex formation and chromatin binding by PRC2.

“The cellular regulation of PRC2 is extremely intricate, which is at least in part due to the components of PRC2 that vary during development. Interestingly, some components are known to be overexpressed in a variety of cancers,” said Dr. Liu, an Assistant Professor of Obstetrics and Gynecology, and Biophysics. “This study provides fundamental knowledge into how PRC2 is structured, changes forms, and is recruited to chromatin during development. Deeper understanding of these topics may someday lead to therapies that target dysregulated PRC2.”

In findings reported in a recent issue of Molecular Cell, the team reconstituted the chromatin binding activity of PRC2 with purified components. Notably, it is well-known that loss of two specific components, JARID2 and AEBP2, causes severe developmental defects in animal models; however, the structures of these two components of PRC2 have eluded scientists so far. 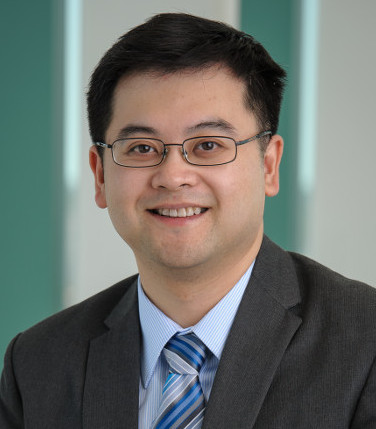 “The crystal structure determined by X-ray crystallography represents one of the most direct and accurate pieces of evidence that describes how the ordered atoms of an enzyme complex are arranged to achieve a specific cellular function,” said Dr. Liu, a member of the Cecil H. and Ida Green Center for Reproductive Biology Sciences and a W.W. Caruth, Jr. Scholar in Biomedical Research at UTSW. “In this case, the crystal structure shows how multiple components of PRC2 mediate gene silencing, a process that turns off expression of specific genes during development. This work also provides a structural basis for analyzing disease mutations that may disrupt proper PRC2 function in individual patients."

The current investigation, together with the crystal structure of an enzymatically active PRC2 previously published in Science by the Liu lab, provides a clear structural framework to understanding PRC2 function in development. The team cautioned that the understanding of PRC2 function is far from complete, and some important cellular regulators not included in the crystal structure still need to be investigated. But given the widespread correlation between the dysregulation of PRC2 function and cancers, the group believes that future studies of PRC2 may identify new targets for drug development.

“A few small-molecule inhibitors of PRC2 developed by different pharmaceutical companies are currently in clinical trials to treat cancers,” Dr. Liu said. “However, these drugs are known to induce mutations of PRC2 that quickly diminish the drug efficacy in cancer cells. Our study opens an avenue for the development of new categories of PRC2 inhibitors – non-enzymatic ones, for example, which may eventually be able to block the function of dysregulated PRC2.”

The investigation received support from The Welch Foundation, the Cancer Prevention and Research Institute of Texas, the Rita Allen Foundation, the National Institutes of Health, and the Cecil H. and Ida Green Center Training Program in Reproductive Biology Sciences.