DALLAS – March 15, 2018 – Songbirds are providing insight into how a specific set of neurons may guide the learning of vocal behaviors in humans.

A study from UT Southwestern’s Peter O’Donnell Jr. Brain Institute demonstrates that a bird’s song can be altered – to the syllable – by activating and deactivating a neuronal pathway responsible for helping the brain determine whether a vocalization is performed correctly.

Previous research has shown that when a song is performed without perceived error, certain neurons release dopamine to brain areas involved in motor control. The new study shows that by activating and suppressing these neurons, scientists can prompt the birds to change specific syllables in future performances. 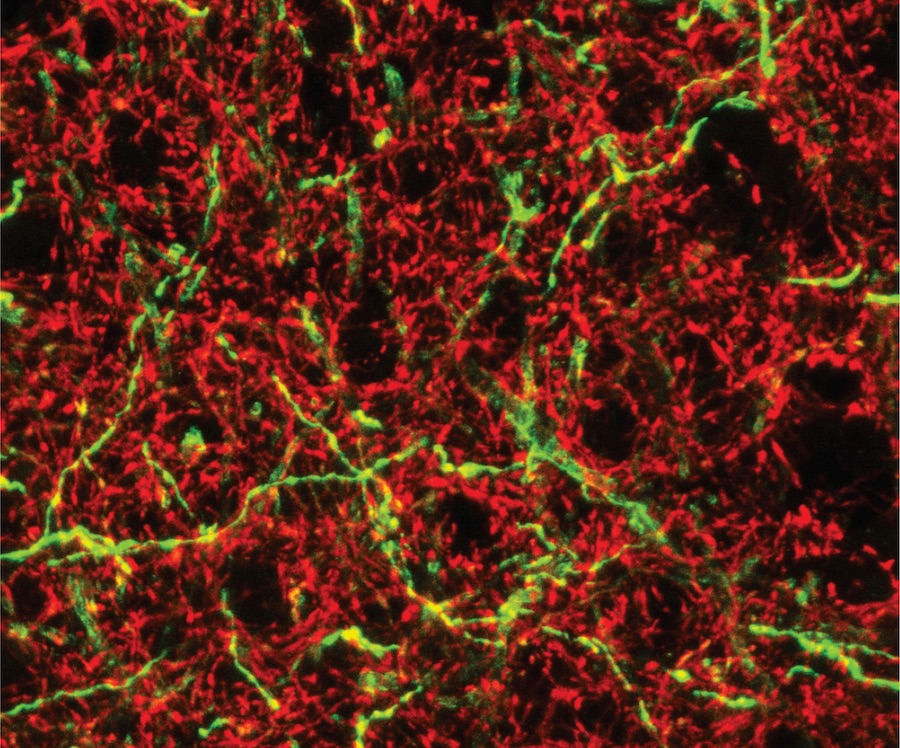 Dopamine neurons that project to the brain’s basal ganglia reinforce a zebra finch’s song. The red axons of neurons express dopamine and green axons are genetically modified to express optogenetic channels that allow their activity to be controlled with light.

“The results show unexpected precision in how these signals can guide the refinement of vocalizations. We expect this pathway plays a similar role in how people learn and adjust their speech,” said Dr. Todd Roberts, Assistant Professor of Neuroscience and a Thomas O. Hicks Scholar in Medical Research.

The study published in Neuron focused on the ventral tegmental area (VTA), an integral part of the brain’s reward system that reinforces behaviors. Scientists in the Roberts laboratory used optogenetic methods to control the VTA neurons in zebra finches as they practiced their song.

The discovery is the latest in a string of findings from Dr. Roberts’ lab, which specializes in understanding how the brain functions during vocal learning. By mapping the neural processes involved as birds learn mating songs, scientists hope to someday use that knowledge to target specific genes disrupting speech in patients with autism or other neurodevelopmental conditions. 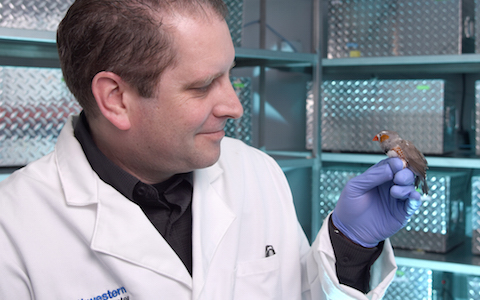 Among other recent projects, Dr. Roberts’ team last year identified a network of neurons that plays a vital role in learning vocalizations by aiding communication between motor and auditory regions of the brain. His lab is also leading an ongoing study funded by the federal BRAIN Initiative research program.

The Neuron study received support from the National Institutes of Health, the National Science Foundation, the University of Texas BRAIN Initiative, the Klingenstein-Simons Fellowship, and the Brain & Behavior Research Foundation.