BAHIR DAR, Ethiopia – Dec. 20, 2018 – Local healers suspected Bisrat Sisay was possessed by evil spirits. They could offer no other explanation for the boy’s violent convulsions that would throw him to the ground and turn his eyes ghostly white. 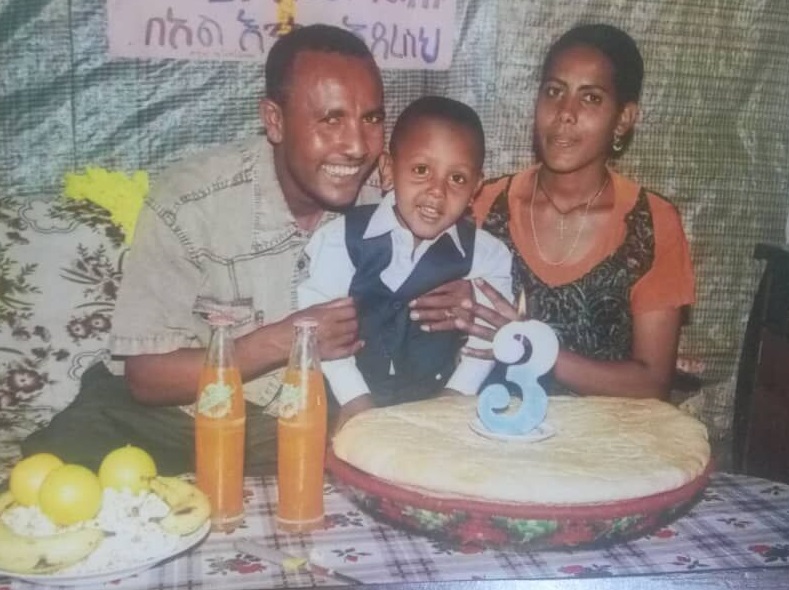 Bisrat Sisay was 3 years old when he started having violent seizures that local healers suspected were caused by evil spirits. He was diagnosed with epilepsy several years later.

Since age 3 he was shunned by many in his largely impoverished neighborhood where superstitions and myth are still shared in the shacks and hovels silhouetted against the forested landscape near Lake Tana. His parents moved Bisrat from school to school, each stay abruptly ending when frightened classmates and teachers witnessed the mysterious shaking and demanded that he leave.

Now 13 years old, Bisrat is beginning a new stage of his life, one where he can logically explain to others that epilepsy – not an evil spirit – causes his convulsions. Although he was diagnosed with the condition several years ago, his parents didn’t know how to manage the seizures until UT Southwestern recently started a medical outreach program here that is elevating the care provided by the local hospital.

Bisrat is now focused on catching up on his education, a challenging mission for a fifth-grade teenager whose stuttering is among the cognitive scars left by a decade of poor treatment.

“I just want to better my life,” Bisrat said with a shy smile, his words coming haltingly in his native tongue of Amharic.

Bisrat’s story is disturbingly common in Ethiopia, where a shortage of neurologists leaves large swaths of the country without doctors to treat common brain conditions such as epilepsy and autism. But a recent groundswell of international collaborations between developing countries and U.S. medical centers is helping to address the scarcity, in particular in several sub-Saharan Africa nations where the situation is most dire.

UT Southwestern has established one of the newest efforts, a partnership in this northern Ethiopian city where a hospital serving a region of several million people has no neurologist and lacks basic brain-scanning equipment. The medical center headquartered in Dallas is teaching local medical personnel the basics of neurology and each summer is sending its own doctors and doctors-in-training to help with patients like Bisrat.

“This is how we develop a new breed of doctors,” said Dr. Mehari Gebreyohanns, a UT Southwestern neurologist from Ethiopia who is spearheading the collaboration endorsed by Bahir Dar University and the local government. “We are training the next generation of leaders who believe they can improve the quality of life, not just in the U.S. but in countries thousands of miles away.” 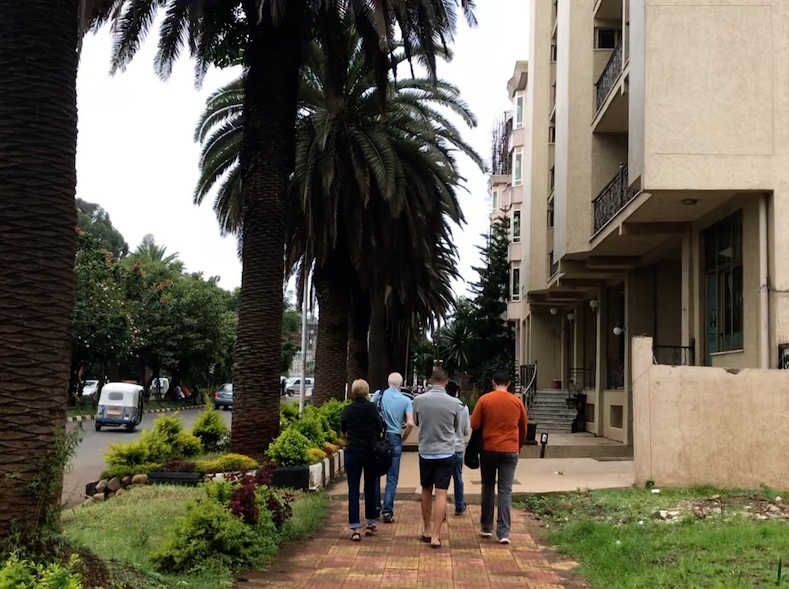 The city of Bahir Dar in northern Ethiopia has a population of about a quarter million people but has no neurologists to handle brain conditions such as epilepsy, autism and stroke. 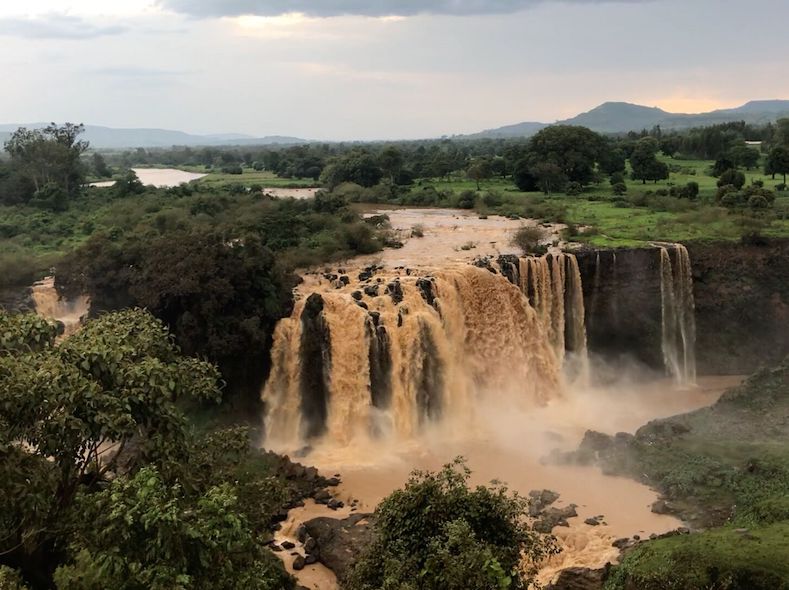 UT Southwestern Medical Center doctors visited Bahir Dar last summer in an effort to establish a neurology program in the city, which boasts a successful tourism industry near the source of the Blue Nile River but is burdened with a severe shortage of medical care. 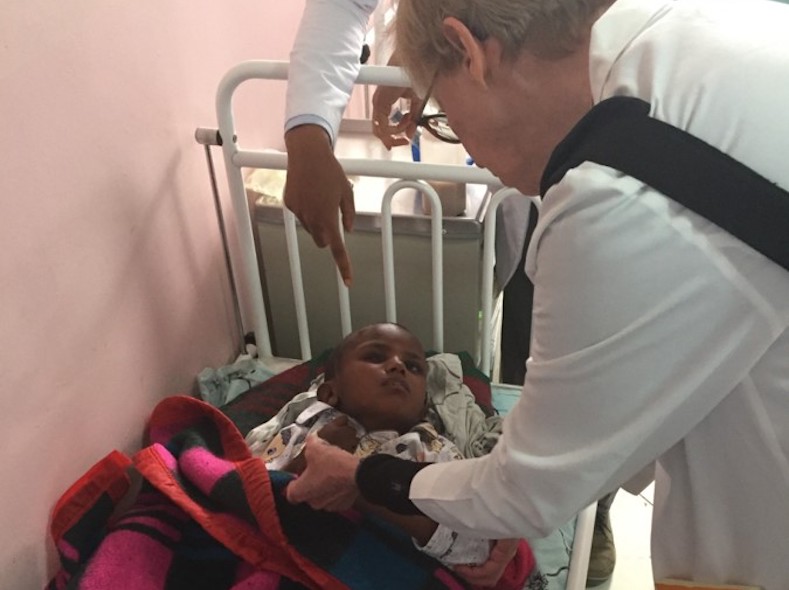 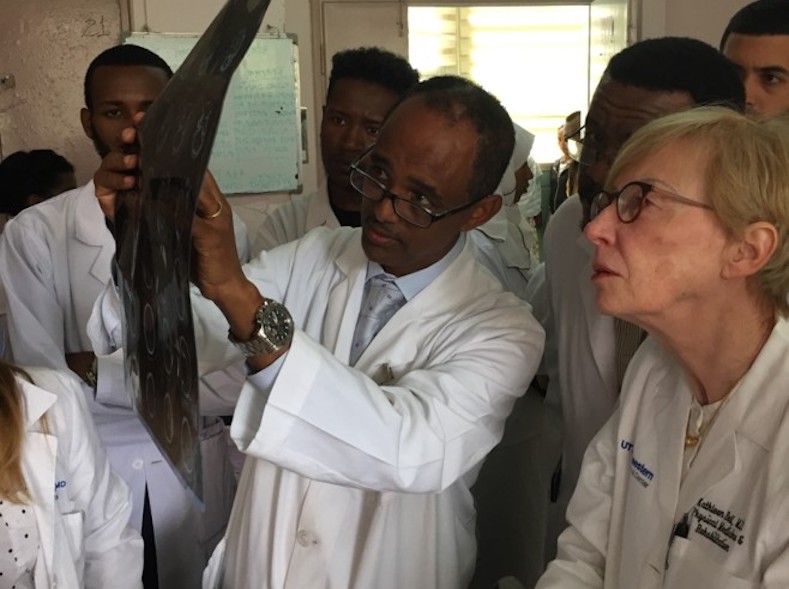 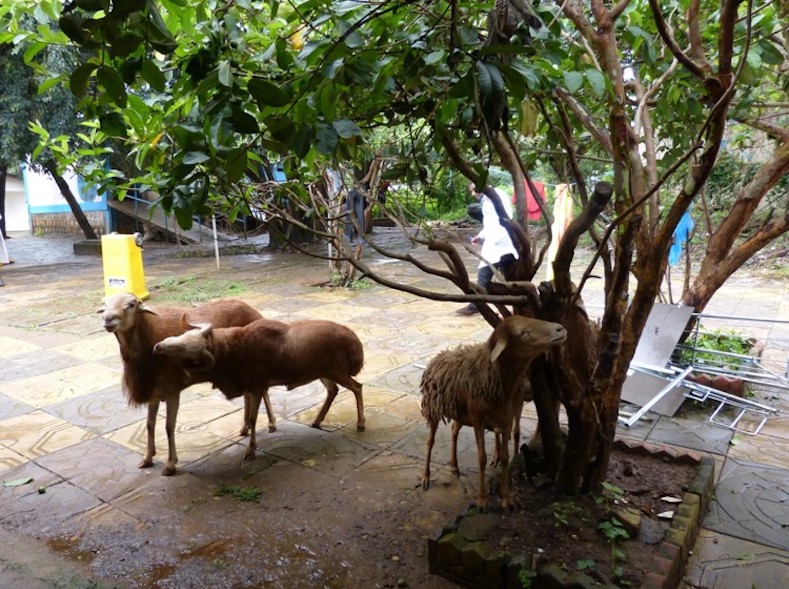 Sheep roam a courtyard in Bahir Dar’s Felege Hiwot Hospital where UT Southwestern Medical Center has established a neurology outreach program. Medical personnel use the sheeps’ blood for a type of bacteria testing. 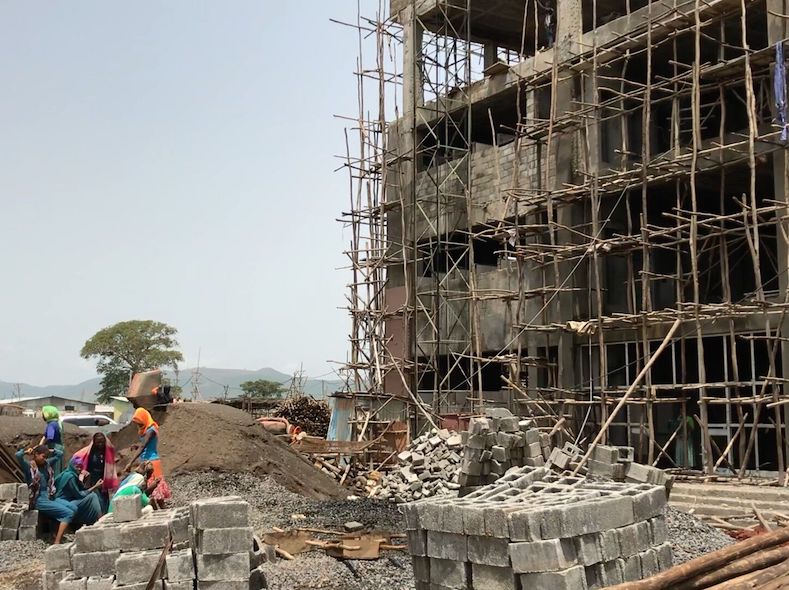 A research building is being constructed in Bahir Dar to help expand medical education opportunities for local physicians.

Medical collaborations have been popping up across the globe through the years, evidenced by a review estimating that nearly a quarter of U.S. medical schools offer a structured global health program.

Yet specifically with neurology, the outreach remains far from meeting the vast need, as noted in one survey that found 23 African nations averaging 1 neurologist per 5 million people and 12 nations without any neurologists.

Harvard University in 2013 began devoting funds to a neurology collaboration in the southern African country of Zambia, which previously had one neurologist to serve its population of more than 17 million. That venture has resulted in the development of various neurology laboratories and ongoing efforts to mentor Zambian medical and graduate students on neuroscience research projects. Other collaborations have been established in countries such as Uganda and Malawi.

“Over time, our Global Health Initiative will enable UT Southwestern faculty members to sustain additional programs around the world to promote research and education that addresses some of the most challenging health issues of our time,” said Dr. J. Gregory Fitz, who’s overseeing plans to expand UT Southwestern’s global health programs. “We will all be enriched by these relationships with our partners around the world.”

Peddlers, chickens, and an occasional sheep roam the dirt streets in poorer areas of this community, a mostly dilapidated urban setting not far from the picturesque forests that encircle the source of the Blue Nile River.

Although Bahir Dar boasts a successful tourism industry a day’s drive north of Ethiopia’s capital, UT Southwestern doctors were inundated with scenes of poverty and hardship as they recently toured the city’s hospital and surrounding neighborhoods.

On one occasion a resident doctor visiting from Dallas pointed out a man walking with an unstable gait. “What condition do you think he has?” Dr. Gebreyohanns asked. The resident doctor suggested cerebral palsy, a neurological disease commonly accompanied by difficulty in mobility.

He explained that Ethiopian families with little means often resort to eating a legume abundantly found in the area called grass pea, which contains a harmful amino acid. Eating too much grass pea causes lathyrism, a tropical disease marked by muscular weakness, stiffness, and an abnormal gait.

Conversely, UT Southwestern’s doctors have enlightened local physicians on diseases that are often misdiagnosed. In one case, a patient believed to have multiple sclerosis was set on a new treatment plan after a visiting physician diagnosed the person with neuromyelitis optica, an autoimmune condition rarely seen in Ethiopia but is familiar to neurologists practicing in the U.S.

These examples epitomize the exchange of knowledge occurring as American medical centers expand their presence in developing countries. Each project presents its own cultural idiosyncrasies in which even physicians from the U.S. learn from the local communities.

“Not only are we helping an impoverished community, we’re creating better doctors,” Dr. Gebreyohanns said.

Mission from the heart 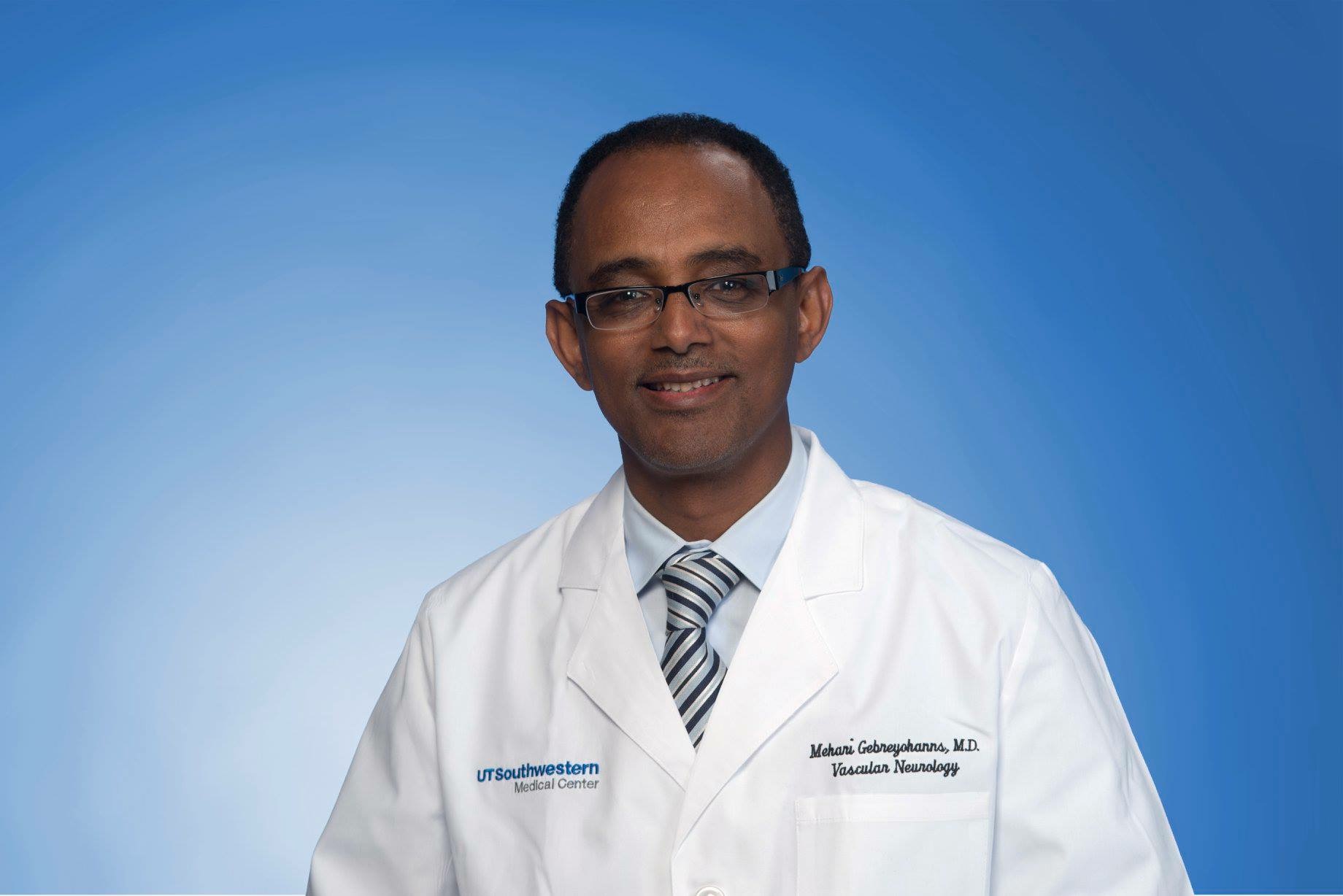 Dr. Gebreyohanns was 19 when he left his native Ethiopia in 1986 amid a reign of persecution and terror by a communist military regime that prompted an exodus of families seeking refuge in other countries. Among the five siblings, he was the only one to receive a student visa that allowed him into the United States, while the others made a grueling trek into neighboring Sudan.

His parents stayed behind and weren’t able to visit him until several years later. By then, his father had an advanced case of Parkinson’s disease that made it difficult to walk. His physical demise was accelerated due to a late diagnosis and lack of proper medications in his country.

“I was so distressed to see him hobble around, knowing how he was suffering. But there was really nothing we could do at that point,” Dr. Gebreyohanns said. “I wish times were different; I wish my dad could have gotten the help he needed.”

His father died a few years later, the pain of his passing not subsiding as Dr. Gebreyohanns completed medical school and began his career. But it wasn’t until a trip he made in 2016 to Bahir Dar that he formed the idea to organize a program to benefit people like his father whose neurological conditions are often misunderstood and left untreated.

Touring the city’s hospital during that trip, he saw old metal beds crammed into small rooms where a dozen patients lay, most of them having to bring their own linens. He noted the outdated equipment, no hand sanitizer, and an absence of a single neurologist to treat stroke patients and others in need of urgent care.

“It was shocking to me,” he said. “But I didn’t see this as a hopeless case. I looked at this like a blank canvas to paint a great vision for these people.”

‘Thinking outside the box’

Dr. Gebreyohanns gathered support at UT Southwestern to create a global neurology elective for doctors-in-training to spend up to a month in Bahir Dar.

But the collaboration established last summer has a much broader scope that includes training local doctors and nurses to be neurology practitioners with core skills in diagnosing and treating brain disorders. A planned telemedicine program will allow the hospital real-time feedback from UT Southwestern neurologists in the U.S.

In addition, Dr. Gebreyohanns’ team is helping to organize specialized care units where patients with similar cases are located in the same areas for better patient outcomes.

Longer-term goals include establishing a resource center for autism, which Dr. Gebreyohanns said appears to be unusually common in this city. The center would provide care for autistic children and help UT Southwestern enhance its genetic and clinical research into the condition.

“Every day we’re thinking outside the box to overcome the barriers in the community,” Dr. Gebreyohanns said. “It has changed me and it will change others, especially the residents who come here and experience some very different situations.” 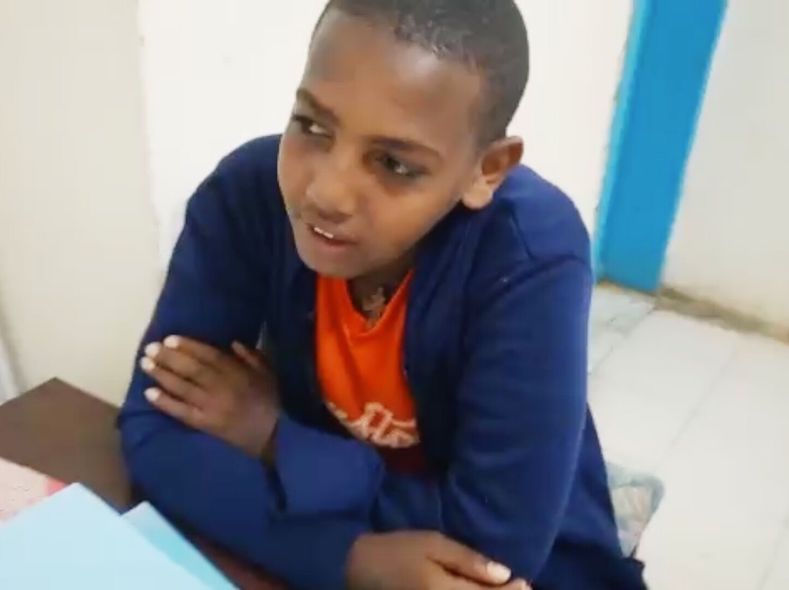 Bisrat Sisay, a 13-year-old fifth grader in Bahir Dar, is trying to catch up on his education after years of poorly treated epilepsy have affected his cognition.

Bisrat, the 13-year-old with epilepsy, still has seizures. His parents still struggle to get access to the best medications. And the stigma attached to Bisrat’s condition continues to prevent him from attending the higher-performing schools in the area.

His father works long hours in construction to provide for his wife and four children, who like most families in their neighborhood don’t have many of the luxuries common in American households, such as toilets and running water in the home.

But in many ways Bisrat is like any other youngster. He loves to play outside with his brothers, especially soccer. He likes planes. One day he hopes to be a pilot, though his condition may prevent him from ever obtaining a license.

Bisrat will always remember the dark chapters of his childhood, being maligned by his peers and neighbors, feeling isolated and unsure of what was wrong with him. However, he expresses no hatred for the people who have spurned him. He instead shows gratitude for the UT Southwestern doctors who showed him kindness and hope for a better future.

He finds such positive attitudes contagious.

“When people are happy,” he said in Amharic, “that makes me happy.”

Dr. Gebreyohanns is an Assistant Professor of Neurology & Neurotherapeutics who specializes in stroke care and telemedicine. His project, called the BORNE Initiative (Bahir Dar Outreach for Neurology Education), is supported by gifts from Serena and Tom Connelly and Betsy and Dan Healy.

Dr. Fitz is a Professor of Internal Medicine and holder of the Nadine and Tom Craddick Distinguished Chair in Medical Science.