If the life of UT Southwestern Medical Center were a movie, it might open with a flashback to a sepia-toned beginning as a dilapidated Army barracks in 1943. Jumping forward to present day, the screen bursts into Technicolor. The camera zooms in on a real-life scene that played out on May 10, 2018, on a breezy, sunny day on McDermott Plaza.

The heart of the campus was electric with the energy and palpable joy of thousands of staff, faculty, students, and friends – many clad in cheery, bright blue T-shirts commemorating UT Southwestern’s 75th anniversary.

Over a soundtrack of rock ’n’ roll, attendees were greeted with tropical fruit stand displays of bananas, apples, pears, and oranges.

There were other signs that the South Campus plaza had been transformed into Party Central: Hands clutching ice cream treats or waving in the air. Raucous singalongs and air guitar solos. An outbreak (or several) of the Electric Slide. A conga line of dancers merrily snaking its way through the plaza.

The celebration created a microcosm of the institution’s faculty members doing The Twist – shoulder-to-shoulder with members of the Facilities team. Students rubbed elbows with nurses and researchers.

President Daniel K. Podolsky, M.D., opened the formal part of the celebration by telling the crowd – students, researchers, nurses, physicians, and administrative and support staff – that the day was meant to celebrate them. “The essential work that you do makes it possible for us collectively to deliver on our mission to improve the health of our community and the community worldwide,” Dr. Podolsky said.

He noted that 75 years ago in May, UT Southwestern “was launched as a small school in somewhat shabby circumstances, in a borrowed barracks. In this short time, we have arrived at a campus that thrives and brings to bear the very best of facilities to support the work of the people on the campus.” 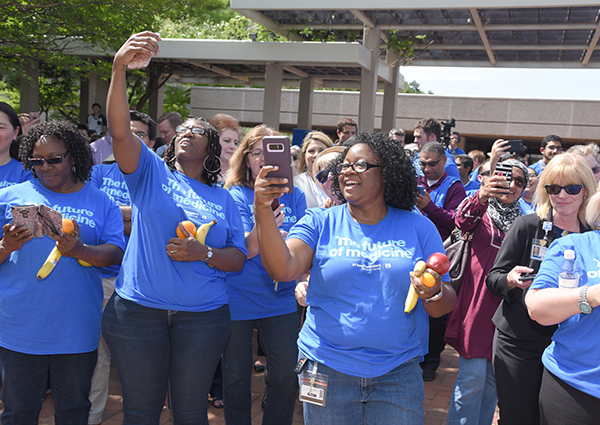 Partygoers snapped selfies during the celebration. 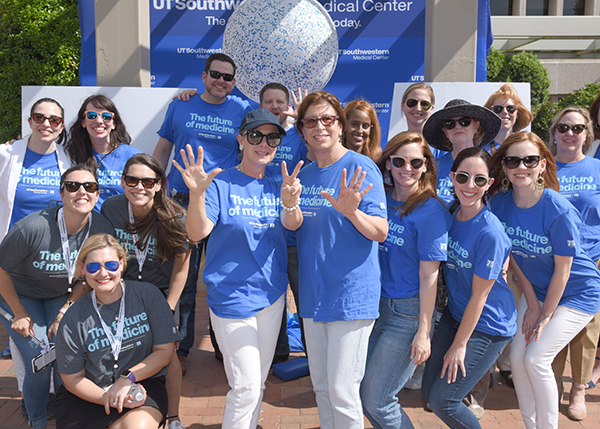 The huge "75" was another great selfie spot on the plaza.

“Having spoken to both of them in their last days, I know they would be thrilled to see the energy represented by all of us who are here gathered today to celebrate the 75 years behind, and the 75 years ahead,” Dr. Podolsky said.

The President introduced Texas Sen. Royce West and Rep. Rafael Anchia, who both spoke of the Texas Legislature’s bipartisan support and admiration for UT Southwestern.

Other speakers were graduating fourth-year medical student Paul Rizk, who represented the student population, and Ebony Coleman-Glenn, who spoke on behalf of employees as a representative of the Employee Advisory Council. 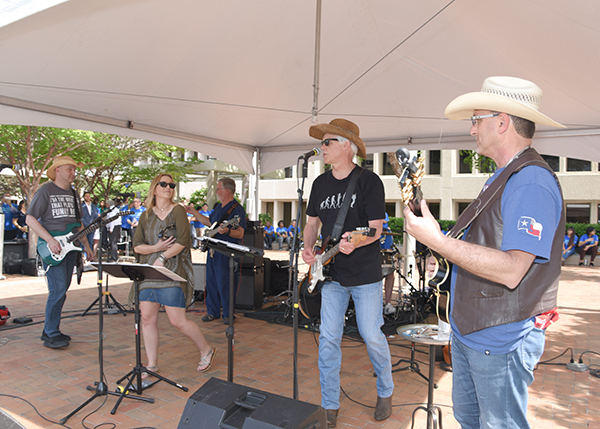 Marc A. Nivet, Ed.D., MBA, Executive Vice President for Institutional Advancement, told the crowd to watch for news of more 75th anniversary-themed activities planned for the fall. He added that the May 10 celebration was being livestreamed for hospital and clinic colleagues who couldn’t attend in person. Before he kicked off the party in earnest, Dr. Nivet asked each person on the plaza to take out their smartphone, snap a selfie, and post it on their favorite social media platform. (You can find many of them by searching for #utsw75.)

With that, he introduced the Transactivators, a band that includes UTSW’s Dr. Eric Olson, Professor and Chair of Molecular Biology and Director of the Hamon Center for Regenerative Science and Medicine; Dr. Jay Schneider, Associate Professor of Internal Medicine (Cardiology) and Associate Director of the Hamon Center; Dr. David Rogers, Associate Professor of Obstetrics and Gynecology; and Stephen Johnson, Software Systems Supervisor in Molecular Biology.

Earlier in the day, Dr. Olson gave the event an enthusiastic thumbs-up. “This is awesome – such a positive vibe. The Transactivators are thrilled to bring some coolness to UT Southwestern today,” he said, grinning. “Who says science can’t be cool?”

The band launched its set with Tom Petty’s Runnin’ Down a Dream, with its fitting opening lyrics: “It was a beautiful day, the sun beat down/I had the radio on …”

Ulysses Johnson, an employee in Facilities Management who was attending with his supervisor, Manny Soomro, marveled over the décor and food displays and said he enjoyed the speakers. 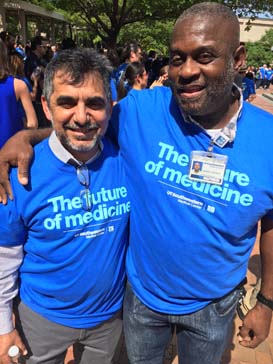 Manny Soomro (left) and Ulysses Johnson of Facilities Management soaked up the atmosphere.

“I think the party is fantastic,” Mr. Johnson said. “I’ve been with UT Southwestern for 30 years, and I’ve never seen anything like this before. In Facilities, we try to support the work and research that’s done here – in every way we can. I feel honored to be a part of this day.”

As the Transactivators ripped into The Beatles’ Birthday, one fan could be spied bending his body into a joyful twist. It was Stuart Ravnik, Ph.D., Associate Dean of the UT Southwestern Graduate School of Biomedical Sciences.

At one point, the crowd on the plaza was also mesmerized by two employees ballroom dancing to the band’s version of How Sweet It Is (To Be Loved By You).

The couple was husband-and-wife Tom Donohue and Angela Brodrick-Donohue, who work in Urology and Academic Affairs, respectively.

After that song ended and a Steve Miller cover began, the couple took a reluctant pause from the rug-cutting, just long enough for Mrs. Brodrick-Donohue to shout over the music: “This is an awesome event. It really brings out everybody across campus.” 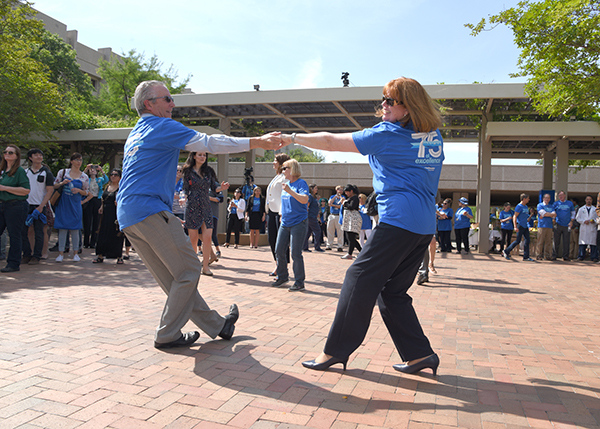 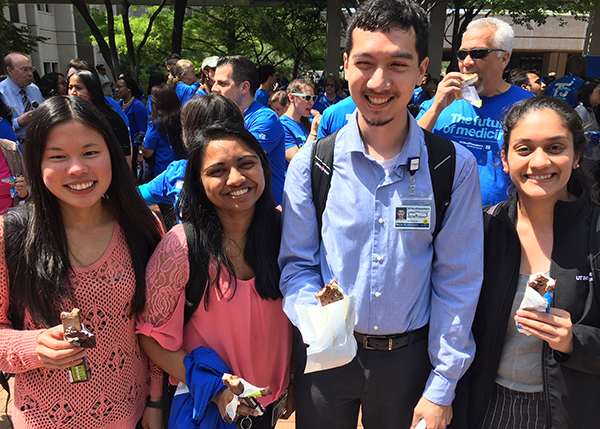 The band played on and even commanded a post-5 p.m. encore: the Rolling Stones’ Honky Tonk Woman.

The song drew a few guests up on stage for the occasion: Christy Garner, Director of Special Events, on tambourine and, playing a mean cowbell, Rebecca S. Gruchalla, M.D., Ph.D., Director of the Division of Allergy and Immunology.

Earlier in the celebration, medical students Eva Wu, Shailavi Jain, and Max McColloster were enjoying some of the prerecorded tunes with their peer, Sona Manjunath, who brandished a T-shirt in one hand and an ice cream sandwich in the other. 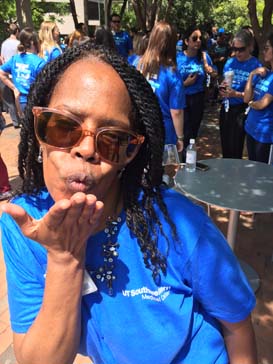 “This is very uplifting,” Ms. Manjunath said. “I’m in my first clinical rotation right now, which is interesting, but it can also be exhausting. So this is an extremely welcome break, because I got some ice cream and got to hear some good music. It’s such a huge honor to be a student here and to be a part of this day. UT Southwestern contributes so much to medicine and research worldwide, so this is really amazing.”

Stephanie Harper, a Patient Services Representative, was one of a gaggle of employees dancing the Electric Slide near the stage. During a dance break, Ms. Harper applauded the party. “I think we’re having a great celebration here,” she said. “They’ve provided water, they’ve provided ice cream, there’s dancing, we’re having a wonderful time, and I’m proud to be a part of this organization.”

Dhruba Deb, Ph.D., a postdoctoral researcher, said he loved that the event brought together the whole institution.

“We have so many diverse groups of people, and sometimes we don’t even meet them,” he said. “Postdoctoral researchers in the labs might not know people in the different departments, so it’s our chance to meet those people from every corner of UT Southwestern.” 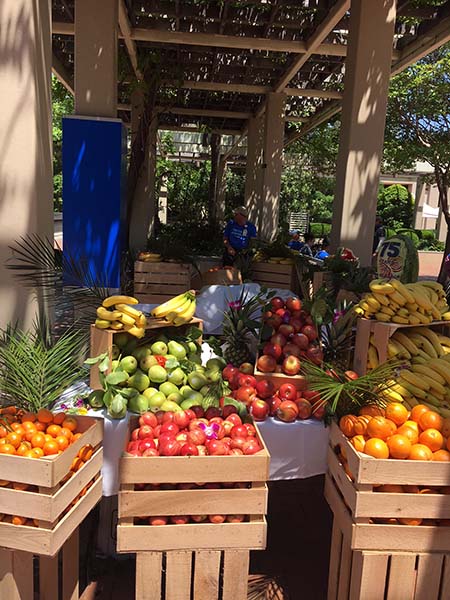 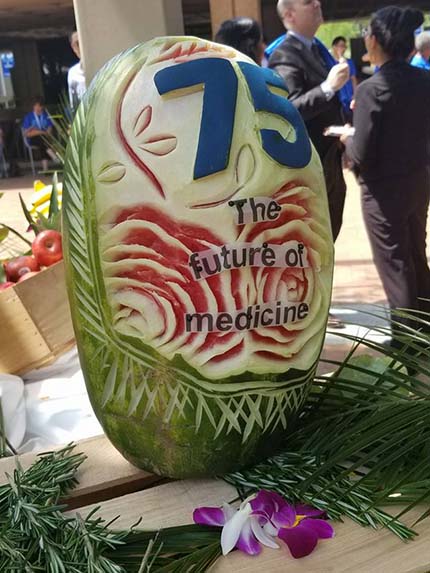