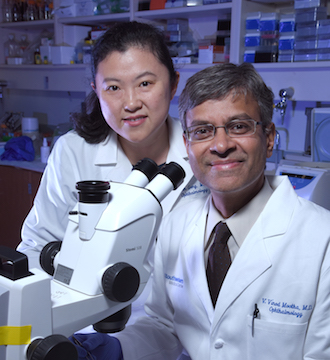 Fuchs’ endothelial corneal dystrophy (FECD) is an age-associated degeneration of the cornea that is the leading cause for corneal transplantation in the United States. A study by a multidisciplinary team of UT Southwestern researchers finds that patients with a genetic, adult-onset muscular dystrophy face increased risk for FECD.

“This investigation is important from the standpoint of understanding disease pathogenesis,” said Dr. V. Vinod Mootha, Professor of Ophthalmology and a member of the Eugene McDermott Center for Human Growth and Development. “We now have two distinct triplet repeats that converge on RNA foci and FECD. We believe that the foci are not bystanders, but rather more likely play a causal role for corneal dystrophy.”

Dr. Mootha, senior corresponding author of the study published in Investigative Ophthalmology & Visual Science, previously published studies showing that the most common genetic cause of FECD is an expansion of an intronic CTG repeat in the TCF4 gene. Expanded repeats associate with a specific splicing factor (muscleblind-like 1, or MBNL1) to form nuclear foci that are a molecular hallmark for this corneal disease. In all, 70 percent of FECD cases are associated with this repeat polymorphism.

“As such, FECD is now considered to be the most common repeat-expansion human disease,” Dr. Mootha said, adding that there is increasing attention to disease-causing mutations in RNA that affect ribonucleoprotein complexes.

“There is tremendous interest in the role of RNA foci in the pathogenesis of a number of degenerative diseases,” he said, adding that identification of disease-causing RNA mutations and the growing understanding of RNA biology and chemistry is expected to provide tools for the development of new therapeutics.

The study, which involved scientists from Internal Medicine, Bioinformatics, and Clinical Sciences, began with a pair of rejected corneas, he said.

“We obtained a pair of corneas from our eye bank in 2016 and found them to be unsuitable for transplantation due to findings of FECD,” Dr. Mootha said. “We found numerous nuclear RNA and MBNL1 foci in the corneal endothelial cells from this donor but were surprised that the subject did not harbor (the expected) TCF4 triplet repeat expansion.”

Dr. Mootha wondered if the donor harbored a CTG repeat expansion in the DMPK gene, which underlies myotonic dystrophy type 1 (DM1). His hypothesis of DM1 involvement was subsequently confirmed by requesting additional past medical history from the donor’s family.

“Strikingly, six out of the 13 had FECD, whereas the prevalence in the general population is only 4 percent,” Dr. Mootha said. “Hence, it appears that the DMPK repeat expansion can serve as a risk factor for FECD.” 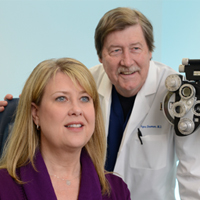 Mrs. Diou says she couldn’t have overseen fun summertime events without the two donated corneas that allowed her physicians at UT Southwestern Medical Center to maintain her sight.