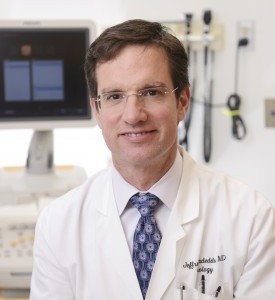 DALLAS – Feb. 26, 2016 – Researchers at UT Southwestern Medical Center have determined that light reflectance spectroscopy can differentiate between malignant and benign prostate tissue with 85 percent accuracy, a finding that may lead to real-time tissue analysis during prostate cancer surgery.

Benefits of this procedure include highly accurate surgical removal of all cancerous tissue and the ability to spare more healthy tissue, minimizing the likelihood of cancer recurrence or additional treatment. Follow-up study is needed before this procedure could be implemented, however.

“We used a novel light reflectance spectroscopy probe to evaluate surgical margins on radical prostatectomy tissue specimens and correlated the findings with pathological examination,” said Dr. Jeffrey Cadeddu, Professor of Urology and Radiology at UT Southwestern and lead author of the study, which was published recently in the The Journal of Urology.

Light reflectance spectroscopy measures light intensity reflected or backscattered from tissues. When someone has prostate cancer, a radical prostatectomy is often called for in which the prostate gland and some of the surrounding tissue is surgically removed. Due to the amount of time involved with traditional techniques and the lack of proven clinical usefulness, analysis to determine removal of all cancer surrounding the visible tumor’s edges is not routinely performed during surgery. As such, undetectable cancer cells can be left behind and are termed “positive surgical margins.”

Patients with intermediate- to high-risk disease requiring radical prostatectomy were enrolled in the study. Immediately after the prostate gland was removed, light reflectance spectroscopy was performed on suspected malignant and benign prostate margins. Each sample was analyzed and correlated with pathological samples, which were analyzed post-surgery. Light reflectance spectroscopy analysis was performed on 17 prostate gland specimens, on which a total of 11 histologically positive and 22 negative surgical margins were measured. The optical probe predicted positive surgical margins with 85 percent sensitivity, 86 percent specificity, and 86 percent accuracy.

“This study highlights one of a growing number of technology platforms that aim to improve the outcomes of cancer surgery,” said Dr. Cadeddu, who holds the Ralph C. Smith, M.D., Distinguished Chair in Minimally Invasive Urologic Surgery. “Further study is required to determine whether such analysis may be used in real time to improve surgical decision-making and decrease the amount of tissue surgeons need to remove.”

Other UT Southwestern researchers who contributed to the study were Dr. Aaron Lay, Assistant Instructor of Urology; Dr. Payal Kapur, Associate Professor of Pathology and Urology; and Dr. Claus Roehrborn, Chairman of Urology and holder of the E.E. Fogelson and Greer Garson Fogelson Distinguished Chair in Urology, and the S.T. Harris Family Chair in Medical Science, in Honor of John D. McConnell, M.D. Researchers from UT Arlington also assisted.

UT Southwestern researchers have discovered a mechanism that cells use to degrade microRNAs (miRNAs), genetic molecules that regulate the amounts of proteins in cells. 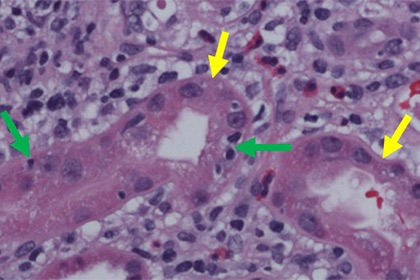 Immunotherapy side effect could be a sign for kidney cancer

An autoimmune side effect of immune checkpoint inhibitor (ICI) drugs could signal improved control of kidney cancer, according to a new study by researchers in UT Southwestern’s Kidney Cancer Program (KCP).