The findings, published in the online journal eLife, could aid in the search for new or improved treatments for patients with AIDS, or to the development of preventive strategies. 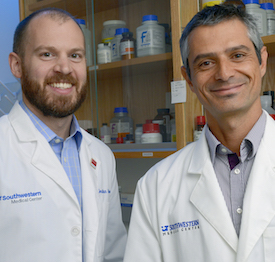 "We have identified the molecular mechanisms by which the Tat protein made by HIV interacts with the host cell to activate or repress several hundred human genes,” said Dr. Iván D’Orso, Assistant Professor of Microbiology at UT Southwestern and senior author of the study. “The findings clearly suggest that blocking Tat activity may be of therapeutic value to HIV patients.”

It has long been known that HIV causes AIDS by hijacking the body’s immune cells, transforming them into HIV factories and killing other immune cells that normally fight disease. HIV also hides in cells and continues to undermine the host’s immune system despite antiretroviral therapy that has improved the outlook of those with AIDS.

The latest data from the Centers for Disease Control and Prevention (CDC), in 2012, estimated 1.2 million Americans were living with HIV, including 156,300 whose infections had not been diagnosed. About 50,000 people in the U.S. are newly infected with HIV annually, the CDC projects. In 2013, the CDC estimated that over 26,000 Americans had the advanced form of HIV infection, AIDS.

Like all retroviruses, HIV has very few genes of its own and must take over the host’s cellular machinery in order to propagate and spread throughout the body. Although the broad aspects of that cellular hijacking were known, the nuances remain to be explored, Dr. D’Orso said.

The study provides insights into HIV’s ability to survive despite antiretroviral therapy, findings that could lead to new therapeutic targets or ways to make current therapies more effective, he said.

“Our study indicates that this small viral protein, Tat, directly binds to about 400 human genes to generate an environment in which HIV can thrive. Then, this protein precisely turns off the body’s immune defense. It is striking that such a small viral protein has such a large impact,” Dr. D’Orso said. “The human genes and pathways that Tat manipulates correlate well with symptoms observed in these patients, such as immune system hyperactivation, then weakening, and accelerated aging,” Dr. D’Orso said, describing the situation in which HIV infection leads to AIDS.

Italy’s National Institute of Health in Rome recently completed a phase II clinical trial of an experimental vaccine that targets the Tat protein. That trial, which followed 87 HIV-positive patients for up to three years, reported that the vaccine was well-tolerated without significant side effects. However, it will take several years to determine if the vaccine works, Dr. D’Orso said.

Although someone can have HIV for years without showing symptoms, AIDS occurs when HIV blocks the body’s ability to fight off illness. The person then becomes overrun by the opportunistic infections and specific cancers that are hallmarks of AIDS.

Study contributors included joint first authors Jonathan Reeder, a medical student at UT Southwestern who worked in Dr. D’Orso’s lab as a Green Fellow while an undergraduate at UT Dallas; and Dr. Youn-Tae Kwak, a research scientist in Biochemistry. Co-authors include Ryan McNamara, a former graduate student in Microbiology; and Dr. Christian Forst, a former UT Southwestern faculty member who is now at the Icahn School of Medicine at Mount Sinai, New York.

Grants from the National Institutes of Health and The Welch Foundation supported this research.