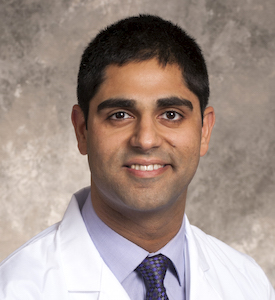 DALLAS – Dec. 1, 2016 –Hospitals in which the administration of epinephrine to patients whose hearts have stopped is delayed beyond five minutes have significantly lower survival rates of those patients, a new study led by a cardiologist at UT Southwestern Medical Center finds.

Using data from a large registry, the national team of cardiologists found that nearly 13 percent of patients survived cardiac arrest when epinephrine shots were given within the first five minutes of the heart stopping, compared to about 11 percent when the epinephrine was given after five minutes, independent of all other aspects of care.

“That is a 20 percent better survival rate for patients at hospitals where epinephrine is given quickly, which is a big difference,” said Dr. Rohan Khera, a Cardiology Division fellow at UT Southwestern and the first author on the study published online in the journal Circulation.

Delays in giving the epinephrine shots also had a negative effect on functional recovery, the researchers noted.

“These data are important for hospitals and patients. Improving epinephrine administration time, a likely correlate with overall CPR performance, may improve outcomes in cardiac arrest,” said Dr. Mark Link, Professor of Internal Medicine at UT Southwestern and a specialist in heart-rhythm disorders, who was not involved in the study.

Researchers reviewed more than 100,000 records of patients whose heart stopped while at the hospital, using data from a large national registry run by the American Heart Association. The review involved nearly 550 hospitals across the country.

Researchers found considerable variability in how quickly epinephrine, commonly called adrenaline, was administered among the hospitals reviewed. Although individual hospitals were not identified in the study, the data showed that hospitals treating a high volume of cardiac arrest cases tended to administer the adrenaline shots more quickly than those with a lower volume of cases.

While TV shows commonly portray doctors dramatically shocking the heart with paddles, this is not the reality for most cardiac arrest patients in hospitals. About 80 percent of in-hospital cardiac arrests are due to causes that cannot be addressed using a defibrillator. These non-shockable heart stoppages are treated with CPR (cardio-pulmonary resuscitation) chest compressions and epinephrine, and these non-shockable cardiac arrests have much lower survival rates.

“Treatment options for non-shockable cardiac arrest are so limited that there has been an emphasis on improving current processes,” said Dr. Khera. “Administering epinephrine promptly and improving the quality of CPR – these are the easily improved practices, which may be life-saving.”