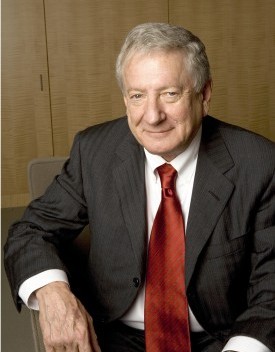 July 1, 1941 – born in New Haven, Connecticut. Dr. Gilman is the son of a Yale University pharmacology professor of the same name. After World War II, the family moves to New York, and the pre-teen often voluntarily sits in on his father's lectures at Columbia University College of Physicians and Surgeons.

1962 – receives his bachelor’s degree in biochemistry from Yale University.

1969 – earns an M.D. and Ph.D. in pharmacology from Case Western Reserve University.

1969–1971 – postdoctoral training in the Laboratory of Biochemical Genetics at the National Institutes of Health under Nobel Laureate Dr. Marshall Nirenberg. While at the NIH, he successfully develops the first good assay for, or way to measure, cyclic AMP, making that messenger molecule broadly available. His report on the assay, a single-author paper published in the Proceedings of the National Academy of Sciences in 1970, quickly becomes one of the most-cited papers in history.

1971–1981 – faculty member of the Department of Pharmacology at the University of Virginia in Charlottesville. By 1977, his independent investigations have led to the discovery of G proteins, so named because it binds with guanosine triphosphate, or GTP, a molecule that Dr. Martin Rodbell at the NIH had identified as central to the transduction process. In 1980, Dr. Gilman isolated the molecule that accomplished the transduction.

1981 – recruited to UT Southwestern by Dr. Kern Wildenthal to be Chairman of Pharmacology. 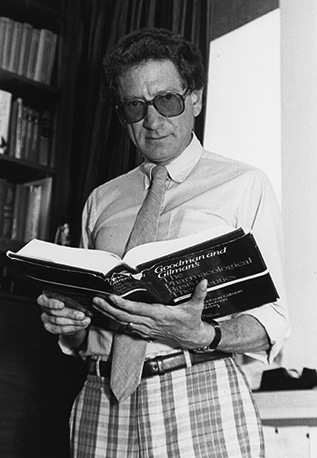 The son of a renowned pharmacologist with the same name and who co-wrote the preeminent textbook The Pharmacological Basis of Therapeutics, the younger Dr. Gilman was proud to have later served as primary editor of multiple editions of the textbook from 1980 to 1990.

For nearly three decades, Dr. Gilman – holder of the Nadine and Tom Craddick Distinguished Chair in Medical Science, the Raymond Willie and Ellen Willie Distinguished Chair in Molecular Neuropharmacology, in honor of Harold B. Crasilneck, Ph.D., and the Atticus James Gill, M.D., Chair in Medical Science – will serve the Medical Center. In addition to his administrative, research, and teaching duties at UT Southwestern, Dr. Gilman will lead the Alliance for Cellular Signaling, a multi-institutional research effort aimed at advancing the understanding of how cells communicate; will oversee the Cecil H. and Ida Green Comprehensive Center for Molecular, Computational and Systems Biology; and will readily serve with other distinguished faculty members on the selection committee for the Endowed Scholars Program in Medical Science, a one-of-a-kind effort to recruit and nurture promising early-career investigators who will make the medical breakthroughs of the future

1985 – elected to the National Academy of Sciences.

1988 – elected to the American Academy of Arts and Sciences.

1994 – shares the Nobel Prize in Physiology or Medicine with Dr. Rodbell for pioneering discoveries involving G proteins, and their critical role in cellular signal transduction. 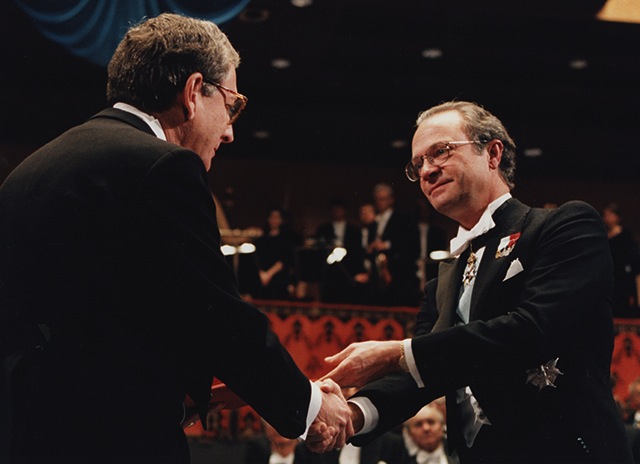 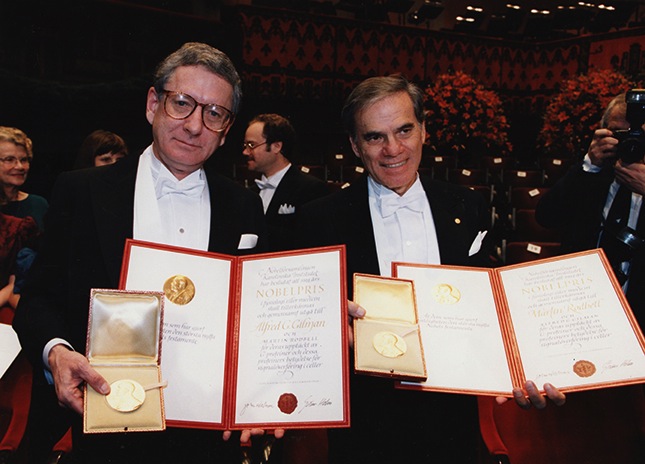 Dr. Gilman and Dr. Martin Rodbell of the NIH visit after sharing the 1994 Nobel Prize in Physiology or Medicine for pioneering discoveries involving G proteins, and their critical role in cellular signal transduction. 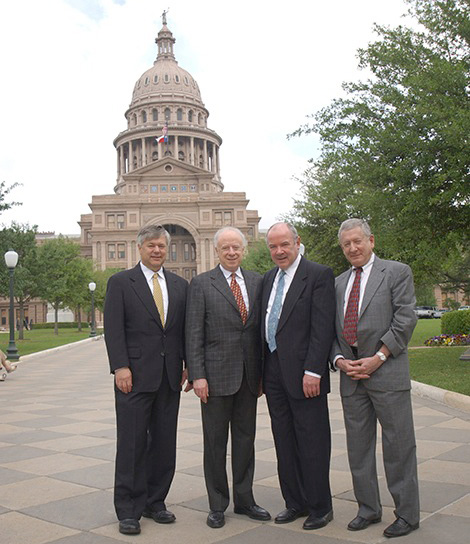 2005 – appointed as Dean of the Medical School. Serves as the chief academic officer of the institution, including overseeing all faculty appointments and the education of more than 800 medical students and 1,200 clinical residents in training. 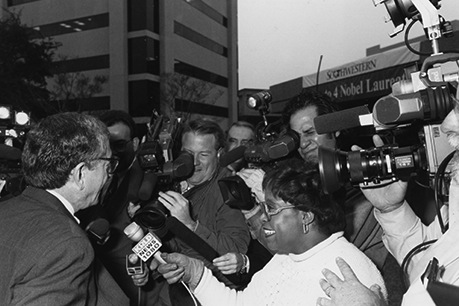 Dr. Gilman, here swarmed by media, received international acclaim after returning to his duties on campus. 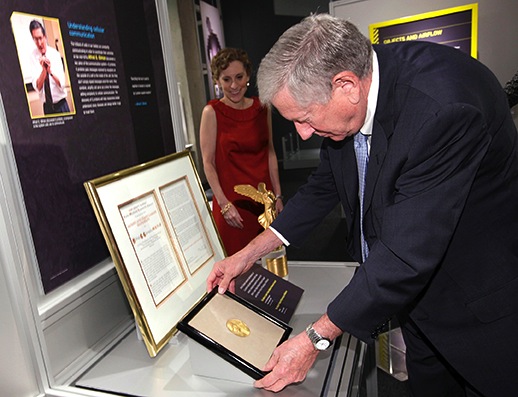 Dr. Alfred G. Gilman places his donated 1994 Nobel Prize Medal in Physiology or Medicine for display at the Perot Museum as Nicole Small, the former Eugene McDermott CEO at the museum, looks on. 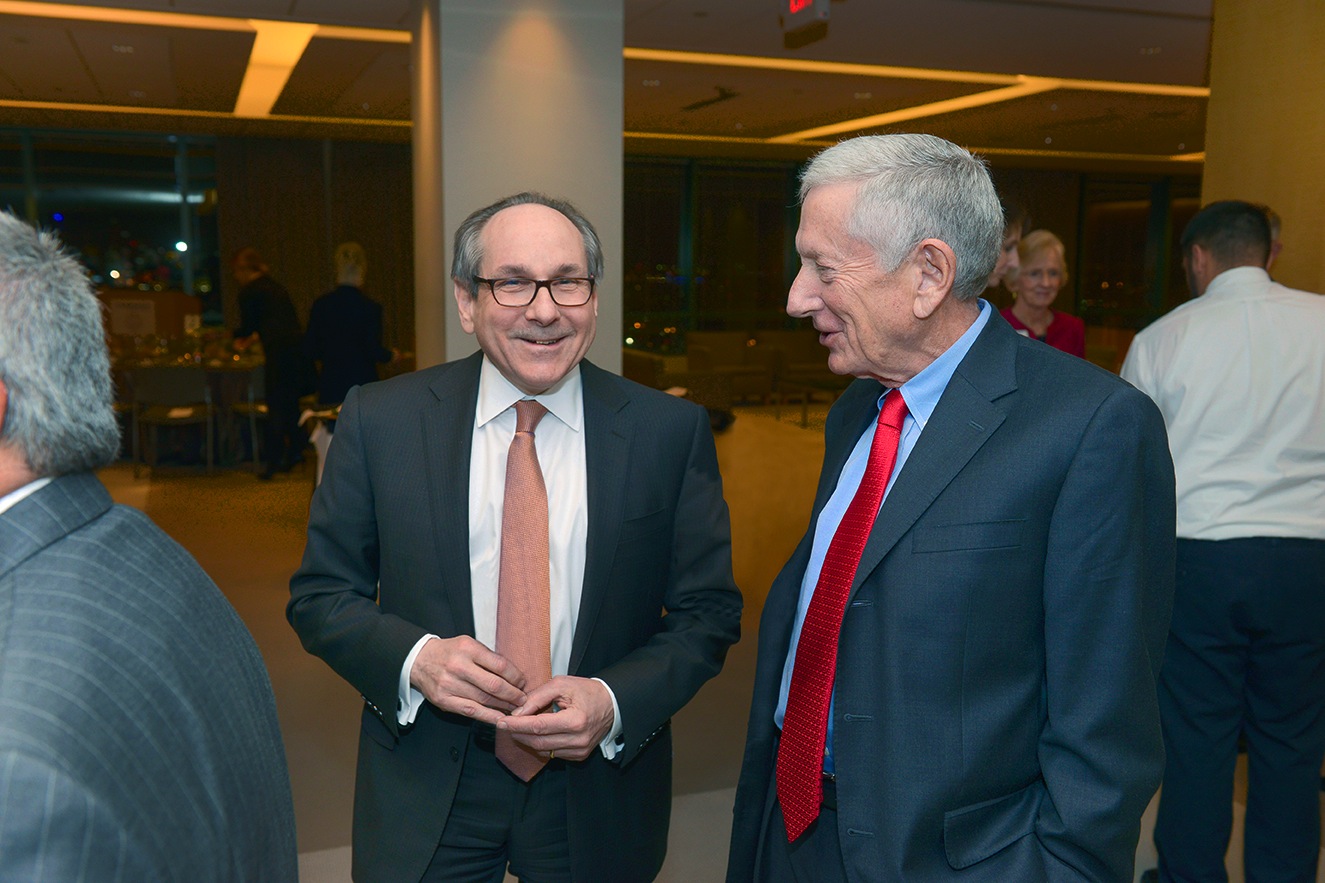 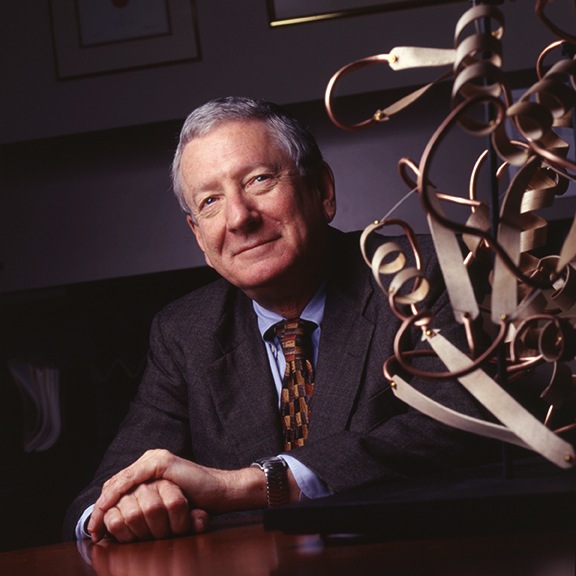