DALLAS – July 15, 2015 – Researchers at UT Southwestern Medical Center and in Australia have shown that a drug currently in testing shows potential to cure malaria in a single dose and offers promise as a preventive treatment as well. 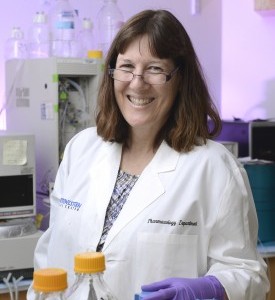 The new drug – DSM265 – kills drug-resistant malaria parasites in the blood and liver by targeting their ability to replicate. Malaria is a highly infectious, mosquito-transmitted disease that kills nearly 600,000 people worldwide each year, mostly children under 5 years old living in sub-Saharan Africa. Nearly 200 million cases of malaria are reported annually, and about 3 billion people are at risk of malaria in 97 countries.

“DSM265 could be among the first single-dose cures for malaria, and would be used in partnership with another drug,” said lead author Dr. Margaret Phillips, Professor of Pharmacology at UT Southwestern. “The drug also could potentially be developed as a once-weekly preventive.”

The research team included UT Southwestern, the Monash Institute of Pharmaceutical Sciences in Australia, the University of Washington, and the not-for-profit Medicines for Malaria Venture (MMV). The study was published in Science Translational Medicine.

Researchers determined that the compound DSM265 kills the malaria parasite Plasmodium in both liver and blood stages of infection. Further, the compound was shown to be well tolerated and effective in preclinical models.

Currently, the frontline anti-malarial treatments are artemisinin-based combination therapies, or ACTs, which are credited with helping to reduce the malaria burden. However, malaria strains resistant to ACTs have recently been reported in Thailand, Cambodia, Vietnam, Myanmar, and Laos.

“The problem is we’re starting to see more drug resistance, and this is what’s taken out every anti-malarial drug we’ve had,” said Dr. Phillips, who holds the Beatrice and Miguel Elias Distinguished Chair in Biomedical Science, and the Carolyn R. Bacon Professorship in Medical Science and Education. “The parasite is very good at adapting and becoming resistant to drugs − this is inevitable. What we can do is deliver new medicines with new modes of action and safeguard the longevity of the anti-malarial through use in combination as long as possible.”

In order to combat drug resistance, DSM265 likely would be partnered with another new drug and used as a one-dose combination therapy. Another option is to develop DSM265 as a once-weekly preventive for individuals traveling to malaria-endemic regions or for people living in areas where malaria infections are primarily seasonal and human immunity is low. Either scenario is still several years away, pending the outcome of current and future trials, said Dr. Phillips.

DSM265 targets the ability of the parasite to synthesize the nucleotide precursors required for synthesis of DNA and RNA, said Dr. Phillips.

The study concluded that DSM265 appeared to be safely tolerated in non-human tests and established optimal dosing levels and length of drug effectiveness in preclinical models to estimate dosing for humans, paving the way for clinical trials. The first clinical trial was a safety study in Australia, followed by an ongoing efficacy study in Peru to evaluate the ability to treat patients with malaria. Additional human studies are planned, including one to test the drug as a preventive medicine. UT Southwestern is assisting in an advisory capacity in these studies and is providing support with biomarker assays.

Work on DSM265 began in Dr. Phillips’ lab. In 2008, her research team identified an inhibitor of an enzyme that the malaria parasite requires for survival. This enzyme, dihydroorotate dehydrogenase (DHODH), enables the parasite to replicate and spread during infection of humans. The lead drug compound discovered during high-throughput tests at UT Southwestern’s core screening laboratory was then refined to DSM265 in partnership with Dr. Susan Charman at Monash University, the study’s senior author; Dr. Pradipsinh Rathod at the University of Washington; and MMV-affiliated researchers.

DSM265 is the first DHODH inhibitor to reach clinical development for treatment of malaria.

Drs. Phillips, Charman, Rathod, and Dr. Jeremy Burrows of MMV are named as inventors in a pending patent application covering DSM265 and related compounds. The drug has been licensed to MMV, which is leading the clinical trial in Peru. MMV works with institutions and drug companies worldwide to further research and development of new malaria treatments. DSM265 is one of several potential anti-malarial drugs now in various stages of development in collaboration with MMV.

UT Southwestern collaborated on this study with researchers from the University of Washington, Massachusetts Institute of Technology, Columbia University Medical Center, SUNY Upstate Medical University, SRI International, and the National Institutes for Allergy and Infectious Diseases in the United States; MMV, and the Swiss Tropical and Public Health Institute in Switzerland; Monash and Griffith University in Australia; Biomedical Primate Research Center, and TropIQ Health Sciences of The Netherlands; the Imperial College of Science, Technology and Medicine in the United Kingdom; and GlaxoSmithKline divisions in both Spain and the United Kingdom.

The research was funded by MMV, the National Institutes of Health, the Welch Foundation, and the Wellcome Trust. Dr. Phillips and two other authors not affiliated with UT Southwestern are paid consultants for MMV. Other authors hold stock in TropIQ, and another is a paid consultant to Hepregen.

Pregnant women who test positive for COVID-19 and their newborn babies have a low risk of developing severe symptoms, according to a new study from UT Southwestern.

Research presented today by UT Southwestern cardiologists at the annual American Heart Association (AHA) Scientific Sessions 2020 showed that Black and Hispanic people were more likely to be hospitalized with COVID-19 than white patients, and that nonwhite men with cardiovascular disease or risk factors were more likely to die.

Being younger doesn’t protect against the dangers of COVID-19 if you are overweight, according to a new study from UT Southwestern.

UT Southwestern researchers have discovered a mechanism that cells use to degrade microRNAs (miRNAs), genetic molecules that regulate the amounts of proteins in cells.