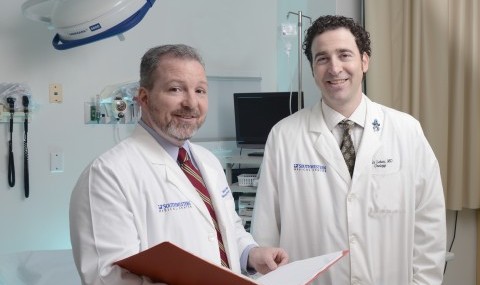 High-dose radiation known as stereotactic ablative radiotherapy (SABR or SBRT) can damage the nearby rectum, potentially causing ulcers or injury to rectal wall tissue. Researchers are studying whether the gel can shift the rectum out of the radiation field, thereby reducing potential side effects for prostate cancer patients receiving stereotactic ablative radiotherapy, which is more powerful than conventional radiation therapy.

“All we need are a few extra millimeters to separate the prostate and rectal wall, and the spacer will help us achieve that,” said Dr. Michael Folkert, Assistant Professor of Radiation Oncology  and co-lead investigator of the trial. “SABR is very effective at treating prostate cancer, but we want to offer it with the fewest possible side effects. By working closely with our colleagues in Urology, we believe that we can significantly reduce the risk of long-term rectal toxicity.” 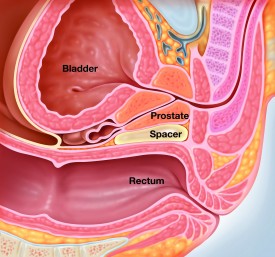 Graphic demonstrates how the spacer gel shifts the rectum away from the prostate gland.

The gel received approval from the Food and Drug Administration earlier this year for use in conventional radiation therapy for prostate cancer. In the trial leading to its acceptance, patients treated with the spacer in place experienced a significant reduction in rectal radiation dose, rectal discomfort related to treatment, and severity of long-term side effects when compared to patients treated without the spacer.

The spacing gel is injected prior to radiation treatments during other required procedures so it causes no additional inconvenience to patients. It is then is absorbed over a three-month time frame.

“Placement of the prostate spacer is minimally invasive. The spacer can be placed at the same time that we place markers that help target the prostate during radiation therapy,” explained co-investigator Dr. Yair Lotan, Professor of Urology who holds the Helen J. and Robert S. Strauss Professorship in Urology.

In this trial, researchers are trying to determine whether the spacer works with the higher dose radiation required by stereotactic ablative radiation. Stereotactic ablative radiation can better avoid organs at risk and thus lead to fewer side effects, while its more potent individual doses are known to result in better disease control. However, early studies at UT Southwestern and elsewhere have shown that the powerful ablative dose delivered by SABR can be associated with an elevated risk of toxicity in certain circumstances.

“There are populations that cannot tolerate the invasiveness of surgery or that may find the inconvenience of long-term daily traditional radiotherapy impractical. So the convenience and relative noninvasiveness of SABR is helpful to some who might otherwise be deterred from getting treatment,” Dr. Folkert said. “Furthermore, there is evidence that prostate cancer behaves differently than other cancers when subjected to radiation. Its damage repair profile suggests that it may be more effectively eradicated with fewer, more powerful doses than with longer lower-dose treatment courses. Thus, the shorter, more convenient treatment may offer superior cancer control.”

The Harold C. Simmons Comprehensive Cancer Center is the only NCI-designated comprehensive cancer center in North Texas and one of just 45 NCI-designated comprehensive cancer centers in the nation. Simmons Cancer Center includes 13 major cancer care programs with a focus on treating the whole patient with innovative treatments, while fostering groundbreaking basic research that has the potential to improve patient care and prevention of cancer worldwide. In addition, the Center’s education and training programs support and develop the next generation of cancer researchers and clinicians.