Scientists discover a new role for RNA in safeguarding chromosome number in human cells, with implications for cancer biology

Previously, genes that encode the recipe for making proteins have been implicated in maintaining the proper number of chromosomes in a cell. The NORAD gene, however, does not encode a protein. Instead, NORAD produces a long noncoding RNA, a type of molecule that was not previously known to be important in chromosome maintenance, the researchers report in the journal Cell. 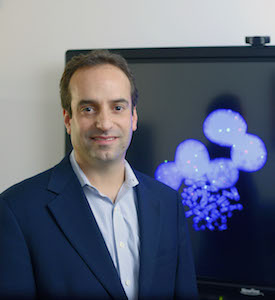 “In the absence of the NORAD RNA, the number of chromosomes in cells becomes highly abnormal,” explained Dr. Joshua Mendell, Professor of Molecular Biology at UT Southwestern and a Howard Hughes Medical Institute Investigator. “This is an entirely new function for a noncoding RNA and may have implications in cancer biology since genomic instability is a hallmark of tumor cells.”

Researchers began studying this particular molecule because the RNA kicks into action after DNA is damaged; they therefore termed it Noncoding RNA Activated by DNA Damage, or NORAD.

The scientists unexpectedly found that NORAD plays a critical role in keeping the genome stable, and conducted experiments showing that when NORAD is absent, cells frequently lose or gain whole chromosomes. Microscopic imaging revealed that cells lacking NORAD are unable to properly pass on chromosomes as they divide. NORAD controls chromosome segregation during cell division by regulating the activity of a family of proteins called PUMILIO proteins. In cells lacking NORAD, overactivity of PUMILIO leads to an unstable genome. Since most cancer cells also exhibit genomic instability, Dr. Mendell and his team are now exploring whether abnormal function of NORAD or PUMILIO proteins contribute to human tumors.

Dr. Mendell, a member of the Hamon Center for Regenerative Science and Medicine and the Harold C. Simmons Comprehensive Cancer Center, and a Cancer Prevention and Research Institute of Texas (CPRIT) Scholar in Cancer Research, has been a leader in the study of other types of noncoding RNAs, including microRNAs, which are involved in regulating gene activity, and play important roles in development and disease. By investigating the roles of microRNAs and other noncoding RNAs, the Mendell lab is hoping to eventually develop new therapies that have the potential to treat cancer and other diseases.

Dr. Mendell, recipient of the 2016 Edith and Peter O’Donnell Award in Medicine from The Academy of Medicine, Engineering and Science of Texas (TAMEST), has previously shown how microRNAs play a key role in the ability of a well-known, cancer-promoting protein, MYC, to drive tumor formation. The Mendell lab has revealed involvement of microRNAs in several other critical cancer pathways and showed that these molecules are important for wound healing.

This work was supported by CPRIT, the National Institutes of Health, the Howard Hughes Medical Institute, and the Leopoldina Fellowship Program from the German National Academy of Sciences Leopoldina, and conducted with assistance from the Veripath Cytogenetics Laboratory at UT Southwestern, the Next Generation Sequencing Core in the Eugene McDermott Center for Human Growth and Development, and the UT Southwestern Proteomics Core.

UT Southwestern’s Hamon Center for Regenerative Science and Medicine was made possible by a $10 million endowment gift from the Hamon Charitable Foundation. The Center’s goal is to understand the basic mechanisms for tissue and organ formation, and then to use that knowledge to regenerate, repair, and replace tissues damaged by aging and injury.