Things didn’t look good one night in July 2014 when Rachel Creed, two months pregnant at the time, suffered three seizures. At a hospital in Lewisville, an MRI revealed a large, malignant brain tumor.

Local specialists were hesitant to tackle such a challenge. But a team of neurological surgeons at UT Southwestern Medical Center saved both mother and fetus, removing the tumor in a complex operation performed while Mrs. Creed was still pregnant. 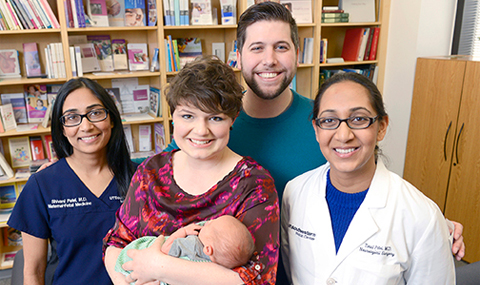 “It was clear to me that Rachel needed further care, while pregnant, and I wanted to help,” said Dr. Toral Patel, Assistant Professor of Neurological Surgery, and Neurology and Neurotherapeutics at UT Southwestern. “With the resources available here, I was confident that we would be able to take excellent care of both Rachel and her unborn child.”

UT Southwestern’s maternal-fetal medicine specialists are recognized for their obstetric care and management of women with high-risk pregnancies. Clinical programs are consistently ranked among the best in the U.S. If the baby were to survive, it needed Mrs. Creed to continue carrying it through the early months of development. Dr. Patel recommended a UT Southwestern obstetrician who specialized in high-risk pregnancies – her sister, Dr. Shivani Patel, Assistant Professor of Obstetrics and Gynecology.

The UT Southwestern neurosurgery team quickly established that Mrs. Creed’s rapidly growing tumor needed to be removed. The successful surgery took place Oct. 20, 2014, when Mrs. Creed was in the 26th week of her pregnancy. Since UT Southwestern is a teaching hospital, it’s standard practice for a neurosurgery resident to assist in the procedure. Dr. Ankur Patel, brother to Drs. Toral and Shivani Patel, got the call.

Once through the surgery, Mrs. Creed and her husband, Michael, did what all parents do; wait with great anticipation. But they also prayed.

Mrs. Creed has now completed radiation and is undergoing chemotherapy treatment, and things are going well.

“I think finding the Patels was meant to happen,” said Mrs. Creed. “The care was very special, tailored to us – the best care possible for Caedmon’s health and mine. Now he has a chance to grow up with mom.”

Meanwhile, Caedmon is doing what every healthy 9-month-old typically does at that age – crawling, cooing, and teething.  For enabling their dream of parenthood to come true, the Creeds are forever grateful for the medical expertise available at UT Southwestern.

Revised DFW model shows a dramatic spike in DFW hospitalizations related to COVID, predicting a potential 20% surge over the next two weeks. 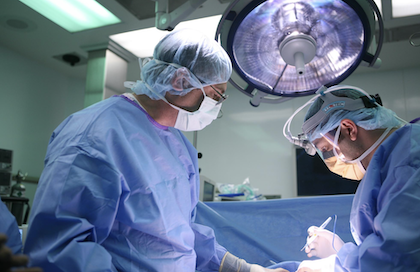