The National Cancer Institute (NCI) of the National Institutes of Health awarded UT Southwestern a $1 million planning grant to develop research proposals for the center.

“UT Southwestern is committed to being a national leader in developing new technologies that will improve patient outcomes through the nexus of research and clinical care,” said Dr. Daniel K. Podolsky, President of UT Southwestern Medical Center, who holds the Philip O'Bryan Montgomery, Jr., M.D. Distinguished Presidential Chair in Academic Administration and the Doris and Bryan Wildenthal Distinguished Chair in Medical Science. 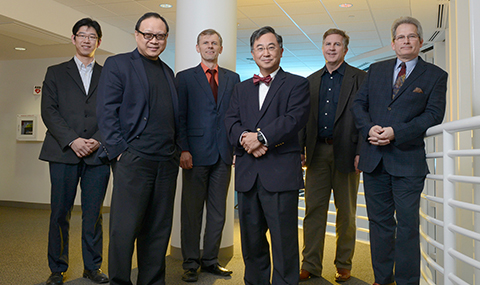 “I commend the National Cancer Institute for their generous support of UT Southwestern and its development of this groundbreaking program,” said Texas Gov. Greg Abbott. “Support from partners like NCI will ensure that Texas universities are at the forefront of research and innovation, and becoming home to the first Heavy Ion Radiation Therapy Research Center in the United States is a #1 ranking Texas could be truly proud of.”

Dr. Hak Choy, Chair and Professor of Radiation Oncology at UT Southwestern, is principal investigator for the Texas award.

“Heavy Ion Radiation Therapy represents the next quantum leap forward in cancer care. It is not available in the U.S., and our location would be the first of its kind in the country,” said Dr. Hak Choy, holder of The Nancy B. and Jake L. Hamon Distinguished Chair in Therapeutic Oncology Research.

“The efficacy of Heavy Ion Radiation Therapy for certain cancers has already been established by foreign institutions, which have conducted clinical trials and found profound increases in overall disease-free survival. However, this therapy needs a more thorough and rigorous scientific approach to uncover its full potential. Additional clinical trials, improvements in accelerator technology, and improvements in understanding the underlying biology are all still critically needed,” said Dr. Choy.

In the U.S., more than 50 percent of cancer patients are currently treated using energetic photons, electrons, or protons.

“Heavy Ion Radiation, on the other hand, delivers therapy that is both more potent and more precise than conventional as well as proton therapy,” Dr. Choy said. “It offers treatment to normally radioresistant tumors as well as improved dose conformation with even better sparing of normal tissue structures close to the target. This is important when treating areas that are close to sensitive structures such as the spine and brain, where we want to minimize exposure as much as possible while achieving maximal impact to the tumor.”

“This award speaks to the strength of our program,” Dr. Choy said.

A national center for the U.S. is important to re-establish U.S. prominence in the field and to provide the foundation of research needed to make this type of therapy available to U.S. cancer patients, Dr. Choy said.

“This is the ultimate radiation tool for the cancer patient; however the U.S. is still catching up to the rest of the world,” he said.

Building costs for the National Center for Heavy Ion Radiation Therapy, targeted for completion in 2021, are estimated at $200 million to $250 million, and would need a combination of federal, state, and private funding for construction and ongoing research. Potential economic impact estimates for Texas are more than $600 million, with 130 new high-level jobs created and 2,000 annual out-of-town visitors.

The Department of Radiation Oncology at UT Southwestern is an integral part of the National Cancer Institute-designated Harold C. Simmons Comprehensive Cancer Center. The Department sees patients at its two main clinics and dedicated radiosurgery suite – the Annette Simmons Stereotactic Treatment Center - on the university campus. The Department is a recognized leader in stereotactic radiosurgery and combined chemo radiation therapy, and includes many of the world’s most advanced radiotherapy tools, including Gamma Knife, CyberKnife, and Vero. The divisions of Molecular Radiation Biology and Medical Physics and Engineering conduct cutting-edge research focused on improving cancer care.

UT Southwestern’s Harold C. Simmons Comprehensive Cancer Center is the only National Cancer Institute-designated cancer center in North Texas and one of just 68 NCI-designated cancer centers in the nation. The Harold C. Simmons Cancer Center includes 13 major cancer care programs with a focus on treating the whole patient with innovative treatments, while fostering groundbreaking basic research that has the potential to improve patient care and prevention of cancer worldwide. In addition, the Center’s education and training programs support and develop the next generation of cancer researchers and clinicians. In addition, the Simmons Cancer Center is among only 30 U.S. cancer research centers to be named a National Clinical Trials Network Lead Academic Participating Site, a prestigious new designation by the NCI, and the only Cancer Center in North Texas to be so designated. The designation and associated funding is designed to bolster the cancer center’s clinical cancer research for adults and to provide patients access to cancer research trials sponsored by the NCI, where promising new drugs often are tested.