UT Southwestern Medical Center leaders recently announced the selection of seven outstanding scientists as new Endowed Scholars in Medical Science. With the 2015-2019 class, 88 selected investigators have launched their research careers through the prestigious program, now in its 19th year.

The program, established in 1998 with $60 million in philanthropic funds, provides seed money and four-year support for early-career investigators to carry out independent, cutting-edge research projects. Each gifted basic science or clinical researcher joins the university as a tenure-track Assistant Professor.

“This was an especially successful year for the Endowed Scholars program, with seven new recruits,” said Dr. Eric Olson, Chairman of Molecular Biology and Director of the Hamon Center for Regenerative Science and Medicine. “This program is the lifeblood of UT Southwestern, infusing the institution each year with the top young investigators in the country. We have very high expectations for this year’s class and look forward to enabling them to achieve their highest potential.” 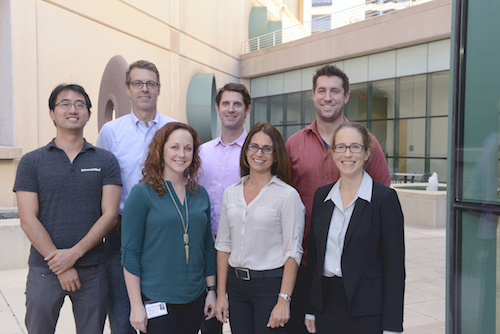 The new Endowed Scholars are:

Dr. Vincent Tagliabracci, Assistant Professor of Molecular Biology, is a native of Sault Ste. Marie, Ontario, Canada. He earned his Ph.D. in biochemistry and molecular biology from Indiana University School of Medicine in Indianapolis, and conducted postdoctoral research at the University of California San Diego.

His research focuses on the role of secreted protein phosphorylation in human diseases such as cancer, bone disorders, and neurodegeneration. Phosphorylation refers to the addition of phosphorous to a molecule, which can alter the molecule’s biological properties. For more than a century, secreted proteins – such as the milk casein proteins in breast milk that provide a rich source of nutrients for newborns – have been known to be phosphorylated. However, the identity of the kinase (enzyme) involved in that process for milk casein remained unknown. Dr. Tagliabracci is lead author of a 2012 article in Science that identified a family of secreted kinases and found that one specifically, Fam20C, is the enzyme that phosphorylates milk casein.

Dr. Tiffany Reese, Assistant Professor of Immunology and of Microbiology, hails from Fort Worth. While completing her postdoctoral fellowship at Washington University in St. Louis, she was lead author on a 2014 study in Science that identifies a mechanism by which infection with a parasite enhances or reactivates a herpesvirus infection.

While epidemiological and clinical data indicate an association between chronic infection and altered immune responses, there has been little data on mechanisms that might explain that association. A better understanding of such mechanisms could improve the effectiveness of vaccines and the treatment of chronic infections such as tuberculosis and malaria, she said.

Dr. Peter Douglas, Assistant Professor of Molecular Biology and an investigator in the Hamon Center for Regenerative Science and Medicine, was born in San Antonio and earned his Ph.D. in biochemistry and cell biology from the University of North Carolina at Chapel Hill.

He was a co-lead author of a paper published in Science in 2014 that marked the first study to link age regulation and classical stress response pathways with the stability of actin filaments, the cable-like cellular organelles that provide structural integrity and transportation in the cell.

Dr. Maralice Conacci-Sorrell, Assistant Professor of Cell Biology, was born in Ribeirao Preto, São Paulo, Brazil, and earned her Ph.D. in molecular cell biology at the Weizmann Institute in Rehovot, Israel. She followed that with postdoctoral training at the Fred Hutchinson Cancer Research Center in Seattle, Washington.

“Our lab is focused on identifying key pathways that regulate cancer cell survival and migration. We integrate molecular and cell biology approaches with mouse models to compare basic mechanisms underlying normal development and cancer progression. One of our major goals is to characterize molecular markers of premetastatic behavior and to use this knowledge to develop therapies to treat refractory tumors,” she said.

Dr. Jan Erzberger, Assistant Professor of Biophysics, is a native of Basel, Switzerland, who grew up in São Paulo, Brazil. He graduated from Harvard College and earned a doctorate in molecular and cell biology from the University of California, Berkeley.

During his postdoctoral training at the ETH Zürich (Swiss Federal Institute of Technology) he studied the role of eIF3, a large, multiprotein factor that is the main regulator of eukaryotic translation initiation.

Dr. Erzberger’s laboratory at UT Southwestern employs the novel hybrid structural approach that he developed in Switzerland. It combines X-ray crystallography, cryo-electron microscopy, and mass-spectrometry to investigate the biogenesis of eukaryotic ribosomes, the molecular machines that translate genetic information into the proteins that run all cellular processes.

Dr. Kendra Frederick, Assistant Professor of Biophysics with a secondary appointment in the Center for Alzheimer’s and Neurodegenerative Disease, joined UT Southwestern following postdoctoral work at the Whitehead Institute for Biomedical Research in Cambridge, Massachusetts. She grew up in Michigan and earned her doctorate in biochemistry and molecular biophysics at the University of Pennsylvania.

Her expertise is in how a new technology for solid-state nuclear magnetic resonance (NMR) spectroscopy – called dynamic nuclear polarization – can be applied to biological samples. The sensitivity increases from the new technology are large enough to allow structural studies of proteins in cells. She is first author on a recent article in Cell that describes this approach. The study found that cellular environments can influence protein structure. Those findings have implications in human disease ranging from neurodegenerative conditions to cancer.

Dr. Milo Lin, a native of Los Alamos, New Mexico, is an Assistant Professor in the Green Center for Molecular, Computational, and Systems Biology and in Biophysics. He earned his undergraduate and doctoral degrees in physics from the California Institute of Technology, where his mentor was 1999 Nobel Prize in Chemistry Laureate Dr. Ahmed H. Zewail. Dr. Lin subsequently was a Miller Independent Research Fellow at the University of California, Berkeley.

Dr. Lin’s many awards at Caltech included the Richard Feynman Prize in Theoretical Physics and the 2012 Clauser Prize for Most Significant Ph.D. Thesis over all fields.

He was lead author on a study published in Proceedings of the National Academy of Sciences in 2012 that found a 200-amino acid protein folding length limit. “Protein domains longer than this limit are unlikely to be able to fold by themselves, explaining the observed length distribution of protein domains and setting a fundamental physical constraint on macromolecular complexity,” he said.