DALLAS – December 8, 2015 – In a groundbreaking study led by UT Southwestern Medical Center, a comprehensive set of empirical biomarkers has been established to aid in diagnosis and treatment of psychosis.

To date, the gold standard for diagnosis of psychosis has been clinical observation, classifying patients into schizophrenia, schizoaffective, and bipolar disorders. But in this study, the Bipolar-Schizophrenia Network on Intermediate Phenotypes (B-SNIP) identified three neurobiologically distinct biotypes that do not always match up with the conventional clinical diagnosis. 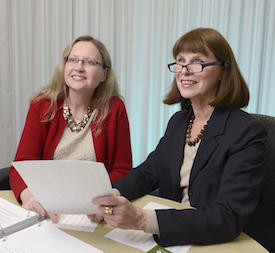 An estimated 6 percent of the U.S. population experience schizophrenia, schizoaffective, or bipolar disorders. That’s as many as 19 million Americans.

“In a sense, we have totally deconstructed and rethought the basis for diagnosis in psychosis,” said Dr. Carol Tamminga, Chair of Psychiatry at the UT Southwestern, who leads the consortium. “Building diagnoses based on biology, not just phenomenology, makes it possible for the biological bases of these brain disorders to stand out as molecular targets for disease definition and novel treatments.”

“In the end, we found the term ‘psychosis’ might actually describe a number of unique psychiatric disorders, just as the term ‘congestive heart failure’ might describe a range of cardiac, renal, and pulmonary disorders, each having distinctive mechanisms and treated with specific remedies,” said Dr. Elena Ivleva, Assistant Professor of Psychiatry and the study co-leader at UT Southwestern.

In the study, participants submitted to various cognitive, eye-tracking movement, and electroencephalography (EEG) tests as well as several modalities of magnetic resonance imaging (MRI). The group included psychotic individuals, their first-degree relatives, and a control group of subjects. Analysis of the results of the biomarker battery in 1,872 of those tested demonstrated three distinct clusters, or biotypes, of psychoses:

“What’s puzzling and fascinating at the same time is that all three biologically driven disease constructs, or biotypes, might be clinically diagnosed as having schizophrenia, schizoaffective, or bipolar disorder,” said Dr. Tamminga, who holds the Lou and Ellen McGinley Distinguished Chair in Psychiatric Research, and the Communities Foundation of Texas, Inc. Chair in Brain Science.

“There are multiple examples in other fields of medicine where use of biomarkers has led to a distinction of unique diseases that overlap in their symptom presentations,” said Dr. Tamminga. “Hopefully, this neurobiological examination of severe mental illness will lead to more precise, biologically meaningful diagnoses and novel treatments.”

B-SNIP was funded by the National Institute of Mental Health, (NIMH) and is part of the NIMH Research Domain Criteria (RDoC) initiative, which aims to develop the fundamental data for basing psychiatric diagnoses on biological characteristics, instead of merely on clinical symptoms. The goal is to develop a framework for modeling mechanisms of brain diseases.

UT Southwestern recently established the Peter O’Donnell Jr. Brain Institute, a comprehensive initiative dedicated to better understanding the basic molecular workings of the brain and applying these discoveries to the prevention and treatment of brain diseases and injuries.