Continuing Medical Education credit will be offered to those who attend the symposium, directed by Matthew Porembka, M.D. and Sam Wang, M.D., and hosted by UT Southwestern Department of Surgery.

Dr. Aguilera is an assistant professor of radiation oncology at UT Southwestern Medical Center. He specializes in the radiation of gastrointestinal cancers. Dr. Aguilera earned his medical degree and Ph.D. at UC San Diego School of Medicine. He then completed his residency in radiation oncology and a gastrointestinal clinical and research fellowship at Stanford University. Dr. Aguilera is a physician-scientist and has clinical interests in the molecular basis of radiation response in gastrointestinal cancers, and has expertise in molecular engineering, molecular imaging, the tumor microenvironment, and tumor immunology. He was successfully recruited to UT Southwestern in 2017 through a CPRIT first-time tenure-track faculty recruitment award. He has a growing research group that has laboratory-based projects and clinical trials with a primary focus on how to better treat gastrointestinal cancers with approaches that can enhance the immune response against tumors.

Shelli is a clinical oncology dietitian at Simmons Cancer Center. She is a certified specialist in oncology and earned her master’s of clinical nutrition degree from UT Southwestern. She specializes in patients with cancers of the GI system. Shelli is passionate about nutrition’s role in cancer prevention and working with patients during treatment to optimize their nutrition status.

Dr. Kazmi is an assistant professor in the Department of Internal Medicine at UT Southwestern Medical Center. He specializes in medical oncology, focusing on gastrointestinal cancers. Dr. Kazmi earned his medical degree from the Aga Khan University Medical College in Pakistan and a master’s in research degree in the United Kingdom. He completed a residency in internal medicine at the UT Health Science Center at Houston followed by a specialization in hematology and oncology at the MD Anderson Cancer Center, where he was chief fellow and received a Young Investigator Award from the Conquer Cancer Foundation. Since joining UT Southwestern, he has been awarded the Eugene Frenkel Scholarship and Outstanding Teaching Award by fellows in the Division of Hematology and Oncology. Dr. Kazmi’s clinical interests include developing clinical trials in gastrointestinal malignancies. He is the site principal investigator for several clinical trials focusing on gastrointestinal cancers.

Dr. Porembka is the Dedman Scholar in Clinical Care, an assistant professor of surgery, and the chief of surgical oncology at Parkland Hospital. He completed his residency training at Washington University in Saint Louis, and complex surgical oncology fellowship training at Memorial Sloan Kettering Cancer Center. He specializes in the treatment of complex foregut malignancies, including cancers of the GEJ, stomach, liver, and pancreas. Dr. Porembka has a clinical interest in the minimally invasive treatment of gastric cancers. In addition, he studies care delivery in gastric cancer and ways to improve effective multidisciplinary care. He serves on the medical and scientific advisory board for the Debbie’s Dream Foundation, which is an advocacy group for patients with gastric cancer.

Dr. Sanjeevaiah is an assistant professor in the Department of Internal Medicine at UT Southwestern. He earned his medical degree from Bangalore Medical College in India. He later pursued academic interests in the United States, completing a residency in internal medicine at Memorial Hospital of Rhode Island/Brown University and a fellowship at West Penn Alleghany Health System in Pittsburgh, Pennsylvania. After finishing his fellowship in hematology oncology in 2013, he worked as a staff oncologist at an Indian health service hospital in Anchorage, Alaska, for three years. During that time, he treated an unusually high number of young patients with GI malignancies. This was due to Alaska natives having a higher incidence of GI cancers compared to the U.S. white population, and these patients unfortunately also present at a younger age and in later stages. This clinical exposure motivated Dr. Sanjeevaiah to pursue a career in GI oncology. Dr. Sanjeevaiah later joined UT Southwestern as a GI medical oncologist, where he has been practicing since September 2016. His time is split between 80% clinical practice and 20% academic activities. He has a specific interest in gastric cancer and is a principal investigator in three gastric cancer clinical trials here at UT Southwestern.

Dr. Suarez is an assistant professor in the Department of Gastroenterology and Hepatology at UT Southwestern. He specializes in advanced endoscopy. He completed his internal medicine training at New York Presbyterian – Columbia and his gastroenterology fellowship at the University of Florida. He then received advanced endoscopy training at UT Southwestern. Dr. Suarez’s clinical interests include cutting-edge endoscopic procedures for pancreaticobiliary disease, Barrett’s esophagus, early gastrointestinal malignancies, and large colon polyps. He is an expert in endoscopic ultrasound, endoscopic retrograde cholangiopancreatography, endoscopic mucosal resection, endoscopic therapies for Barrett’s esophagus, and the management of chronic pancreatitis and pancreatic fluid collections. ​

Dr. Tavakkoli is an assistant professor in the Division of Digestive and Liver Diseases and Department of Population and Data Sciences. She specializes in therapeutic endoscopy. Dr. Tavakkoli completed her residency training at Columbia University Medical Center in New York City and her gastroenterology and therapeutic endoscopy training at the University of Michigan. During her gastroenterology fellowship, she received a master’s in health and health services research through the Robert Wood Johnson Clinical Scholars Program. Her clinical interests include therapeutic endoscopic procedures, including ERCP and EUS, and bariatric endoscopy. Her research and academic interests include addressing disparities in access to high-quality endoscopy among patients with gastrointestinal malignancy.

Dr. Wang is an assistant professor in the Department of Surgery at UT Southwestern. He cares for patients with foregut malignancies. Dr. Wang completed a general surgery residency at the University of California, San Francisco. He received advanced training in complex general surgical oncology through a fellowship at Memorial Sloan Kettering Cancer Center. Dr. Wang is a surgeon-scientist who specializes in the treatment of upper GI cancers. In the lab, Dr. Wang is using patient-derived xenografts, organoids, and transgenic mice to better understand the biology of gastric cancer and to develop novel therapies. 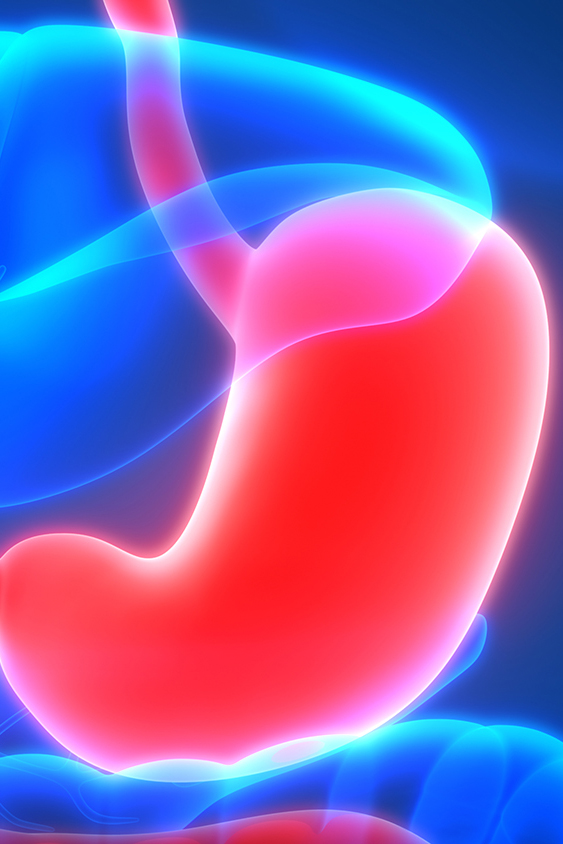 Gastric cancer (GC) is an aggressive solid-tumor malignancy and the third-leading cause of cancer death worldwide. Although the incidence of GC has decreased worldwide, the absolute number of GC cases continues to increase. An increased incidence is being noted in younger populations. It is clear that the changing clinical and epidemiologic landscape of GC has created new challenges for GC diagnosis and treatment.

It is estimated that GC will account for more than 27,510 new diagnoses and 11,140 deaths in the United States in 2019. Compared to 2014, this represents a 1.4% increase in deaths. Overall, GC carries a poor prognosis. The five-year survival rates for GC range from 5% for advanced disease to 70% for localized disease.