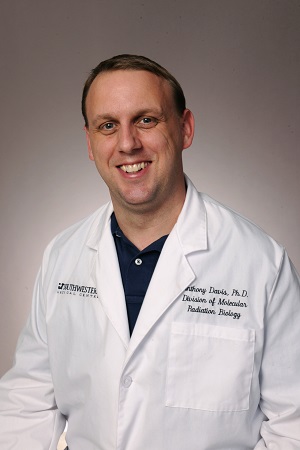 Assistant Professor Tony Davis, Ph.D., has been made an independent in­vestigator in the department’s Division of Molecular Radiation Biology, and will oversee a laboratory dedicated to examining the response and repair of DNA damage, in particular DNA double-strand breaks, the most toxic kind of DNA lesion.

His appointment brings the total number of independent labs in the divi­sion to 10.

The Davis lab will look at several specific mechanisms involved in DNA repair, including: *DNA-PKcs - The division has already generated a significant body of work on the critical role this enzyme plays in non-homologous end-joining (one of two ways that cells repair DNA double strand breaks). Davis will continue to work closely with Dr. Ben Chen in investigating the role of DNA-PKcs.

*BRCA-1 - Dr. Davis has published findings on how this tumor suppressor – which is mutated in inherited breast, ovarian, and pancreatic cancers – regulates non-homologous end-joining. His lab will continue to elucidate how this protein promotes precise repair of DNA double-strand breaks and how mutations in BRCA1 drives development of cancer due to defective DNA repair.

“I think the future for this department is very bright,” he says. “It’s the best place in the country for radiation-based research; some of the best scientific minds are here.”